A look at three alternate natural sweeteners that could be safe for our health. 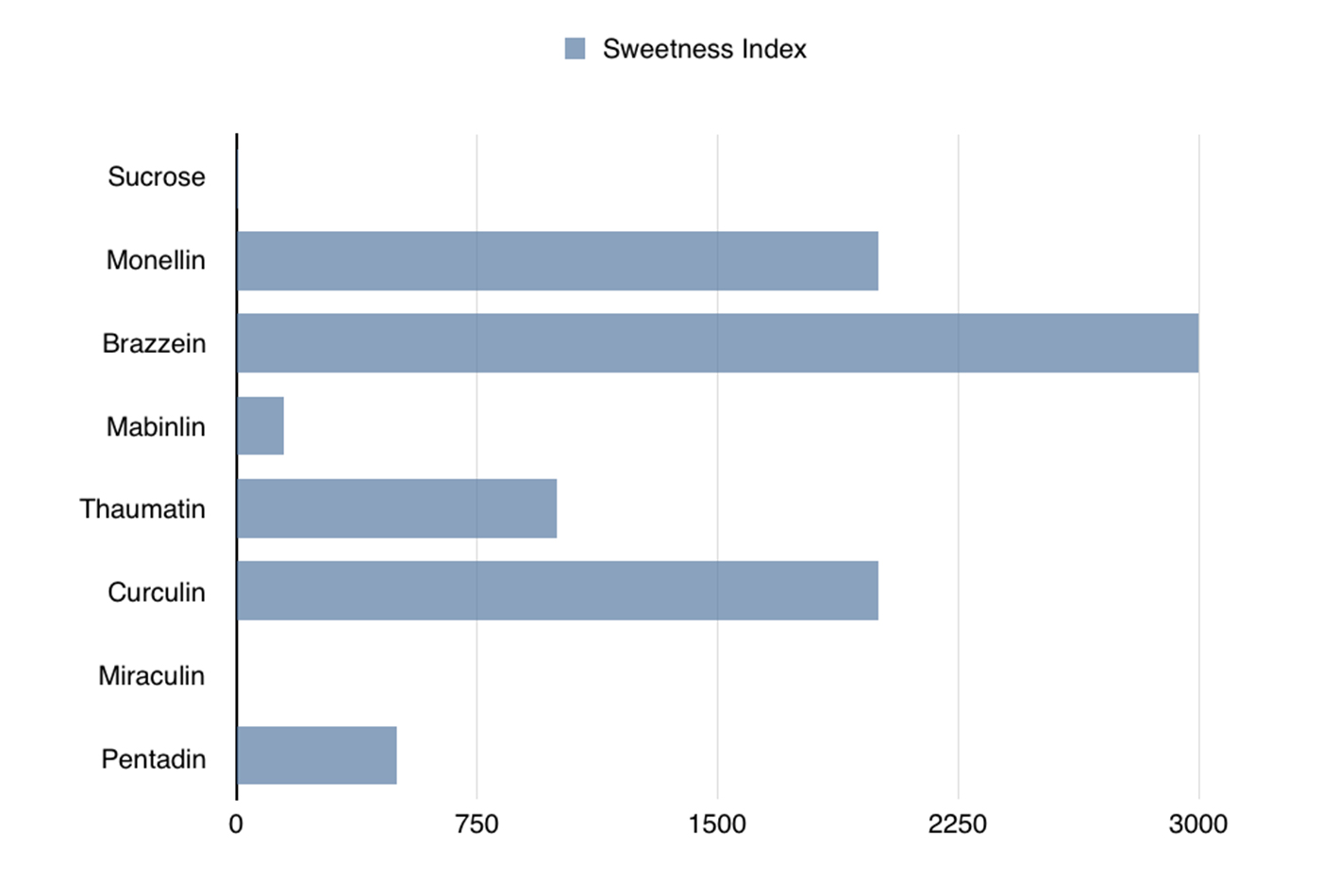 Comparison of sweetness levels of the seven known sweet proteins to the sweetness of sucrose. (source: Courtesy of Raj Nagarajan)

Many of us have a sweet tooth and crave sweet treats throughout the day, like chocolate, candies, fudge, ice cream—you name it. Some of us consume these a little above the recommended amounts because sometimes sweet food just makes us feel better.

Sucrose is the major carbohydrate that is being consumed in every form of processed food such as confectionery, dairy products, or soft drinks. A food company may add honey (40% fructose and 35% glucose), date sugar (80% sucrose), rice syrup (100% glucose), corn syrup (98% glucose), coconut sugar (70%–80% glucose), or evaporated cane sugar (sucrose). But those are just sugar in different forms.

Many processed food products thus contain free sugar, which is concentrated form of sugar. The problem with free sugars is that they do not go through rigorous digestion because they are already released or stripped out of their original encasement (e.g., plant fiber). Free sugar rushes into the small intestine, where sugar metabolism occurs. If the sugar is sucrose, it undergoes hydrolysis into glucose and fructose. Freed-up glucose and fructose travel through the hepatic portal system (which contains the veins and its tributaries from the gastrointestinal tract to the rectum) and get into the bloodstream and flow through the liver for additional processing; fructose is processed into glucose-like compounds for ATP production (energy molecule), while glucose serves as a substrate for the Krebs cycle (cellular respiration) for ATP production. Surplus glucose is converted into glycogen for long-term storage in the liver. If the glycogen accumulates rapidly due to consumption of excess sugary food, it can then undergo a metabolic process that transforms glycogen into fat or LDL cholesterol (the bad cholesterol).

Is there a way around overdoing it? Instead of avoiding or regulating consumption, many people try limiting their sugar intake with artificial sweeteners—sugar substitutes such as saccharin, aspartame, and splenda (sucralose) that taste like sugar but have zero or few calories.

Aspartame, the most popular synthetic sweetener, is made by combining two amino acids: aspartic acid and phenylalanine. But from these components, you would not know that aspartame is 200 times sweeter than sugar. Phenylalanine tastes bitter, and aspartic acid has a flat taste. The chemical combination modifies phenylalanine, resulting in sweet taste perception. Larger compounds can be formed from two simple molecules with different properties from their unlinked components. Although aspartame consists of amino acids, it is not a protein but a dipeptide, which is made up of two amino acids.

Aspartame and other synthetic sweeteners are approved as safe for consumption by the Food and Drug Administration. Numerous research investigations have also found no correlation between aspartame consumptions and brain tumors, diabetes, seizures, and childhood behavioral disorders. More than 200 scientific studies have confirmed that aspartame is a safe sugar substitute. Beyond this, American Medical Association, the American Dietetic Association, the American Diabetes Association, the World Health Organization, the European Commission, and the food regulatory agencies of over 100 countries have approved aspartame as a safe sugar substitute.

In the midst of very positive research results, scientists have also discovered worrisome side effects. For example, John Olney, a well-known psychiatrist and neuropathologist at Washington University School of Medicine, and Richard Wurtman, emeritus professor of neuropharmacology at the Massachusetts Institute of Technology, revealed a link between aspartame and altered brain chemistry that may lead to brain tumors and seizures. A 2014 study by Ohio University researchers strongly linked cardiovascular diseases to diet drinks consumption in post-menopausal women.

What could be responsible for these adverse effects of artificial sweeteners? Critics hypothesize that the methyl group (CH3) attached to the phenylalanine amino acid in aspartame is unstable at 30o C and releases methanol (CH3OH), which is toxic and is linked to causing blindness. Excess methanol in the blood can reach the liver and later can be converted to formaldehyde (CH2O), a well-known carcinogen. A 12-ounce can of diet soda contains 180–200 milligrams (about 4–5 packets) of aspartame, which constitutes about 90 mg of phenylalanine, 72 mg of aspartic acid, and 10–20 mg of methanol.

In the midst of all these mixed reviews about artificial sweeteners and sucrose, are there alternate natural sweeteners that could be safe for our health and much sweeter than synthetic sweeteners?

Yes, there is something new out there that most do not know about: sweet proteins. You might be thinking, proteins are not thought to be sweet. Whenever we hear the word “proteins,” we usually relate it to an animal product, such as meat, milk, or cheese. However, sweet proteins are less common in nature. They are produced by a few tropical plants—all come from the rain forests of Africa and Asia. One is commercially available (thaumatin) and approved by the FDA for specific use to modify and enhance flavors (FEMA GRAS Number 3732, “GRAS” meaning “generally recognized as safe”). Others are highlighted for future markets. Table 1-1 describes the source plants, their geographic distribution, and the chemical name of the sweet proteins derived from them.

Sweet proteins are very sweet. Most of them are 100 or even 1,000 times sweeter than sucrose—the simplest sugar. These sweet proteins could be especially beneficial to people who are prone to obesity and diabetes and those of us who consume high-calorie, sugar-based drinks and foods. It is worth noting that the obesity rate among children aged 6–11 has increased from 11.3% in 1988-1994 to 17.5% in 2011-2014, and as of 2014, diabetes affects 9.3% of the US population. Sweet proteins have the potential to be used as sweeteners in common foods without leading to the negative metabolic effects that sugar causes.

There are seven known sweet proteins (see Table 1-1 and Figure 1-1), many of which are so sweet that only an extremely small amount would taste the same as, say, a piece of chocolate. The main benefit is that they contain a negligible amount of extra calories and no known negative metabolic effects, for the same satisfaction level.

What are these sweet proteins, and why are they sweet? Let’s take a look at three of them: brazzein, thaumatin, and monellin.

Of all the known sweet proteins, brazzein is the most promising, because it tastes like sugar and maintains its structure over a wide range of temperatures and various pH levels. Brazzein comes from a climbing berry plant that grows in West African countries such as Angola, Gabon, Congo, and Nigeria. It is the smallest of the sweet-tasting proteins and is 500–3,000 times sweeter than sucrose (for equal weights). It is not available in stores yet, but will be marketed as a sugar substitute under the name CweetTM if the FDA clears it as safe for consumption. Additionally, a genetically modified corn engineered to produce this protein is under development. This corn would produce a noncaloric, sweet flour for dietetic and diabetic markets.

Thaumatin (Figure 1-3) is another sweet protein that was discovered in 1972 and comes from a tropical plant native to West Africa. This protein is 1,000 times sweeter than sucrose. Thaumatin has extensive disulfide cross-linking, making it particularly stable at high temperatures. This property is especially important if thaumatin is a part of a dish that requires high heat, such as in baking, roasting, grilling, and broiling.

Thaumatin is official as a sweetener in Europe and Japan. In the US, where it is marketed under the name Talin, it is considered safe. The Flavor and Extract Manufacturers Association of the United States (FEMA) gave it a GRAS status (GRAS meaning “generally recognized as safe”) for use as a flavor enhancer in chewing gum and breath fresheners and also as a general use applied to all food. In the European Union, it is approved for use in confectionary and chewing gum. In Japan, thaumatin is used as flavor enhancer in most food and beverage industries.

Monellin, another sweet-tasting protein, was discovered in 1969 (the first sweet protein to be discovered) in serendipity fruits, which are native to West African countries. Monell Chemical Senses Center in Philadelphia determined that it is a sweet protein and not a carbohydrate. Even though monellin was discovered in 1969, it has not received approval in the food industries of the United States, whereas Japan has approved it as a food additive.

When studying the chemical structures of the seven known sweet proteins, scientists saw that they all have an abundance of beta strands (see Figures Figure 1-2, Figure 1-3, and Figure 1-4). Besides that observation, scientists have not been able to identify a “sweet” part that would be common to all of them. Instead, it seems each protein is sweet for a different reason.

For example, studies of brazzein protein by Assadi-Porter and his team at the University of Wisconsin-Madison have shown that when some amino acids are removed from its chemical structure, it loses its sweetness, which indicates that these amino acids are essential for enhancing sweetness by binding to the sweet tasting receptors in our tongue.

A recent study of monellin by Japanese scientist Masanori Kohmura and his team has shown that monellin’s sweet taste is due—at least in part—to an amino acid called aspartic acid (Asp57) that is for making an ionic interaction with a taste receptors on the surface of our tongues.

Scientists are just beginning to solve the mysteries of these sweet proteins and how they induce the sweetness on our tongues. All these studies promise to help us understand why we crave sugary substances and why some people want sugar more than others. Customer demand will lead to new types of foods that do not contain as much sugar and that would ultimately help people reduce their consumption of it. Therefore, sweet proteins might play a pivotal role both in food and taste research in the future. And since it has been shown that too much sugar is detrimental to one’s health, they might be a viable substitution for sugar in foods. But, you may say, we just learned about the existence of sweet proteins; how nice it will be to taste a brazzein- or monellin- supplemented diet ice cream. Yes, you are right—variety is the spice of life, and innovation to reduce the amount of sugar in food, while maintaining product integrity, is an absolute necessity for good health. You can have your cake and eat it too!