Electronic waste is an economic and environmental problem, but citizen scientists can take action by using harvested sensors from discarded electronics. 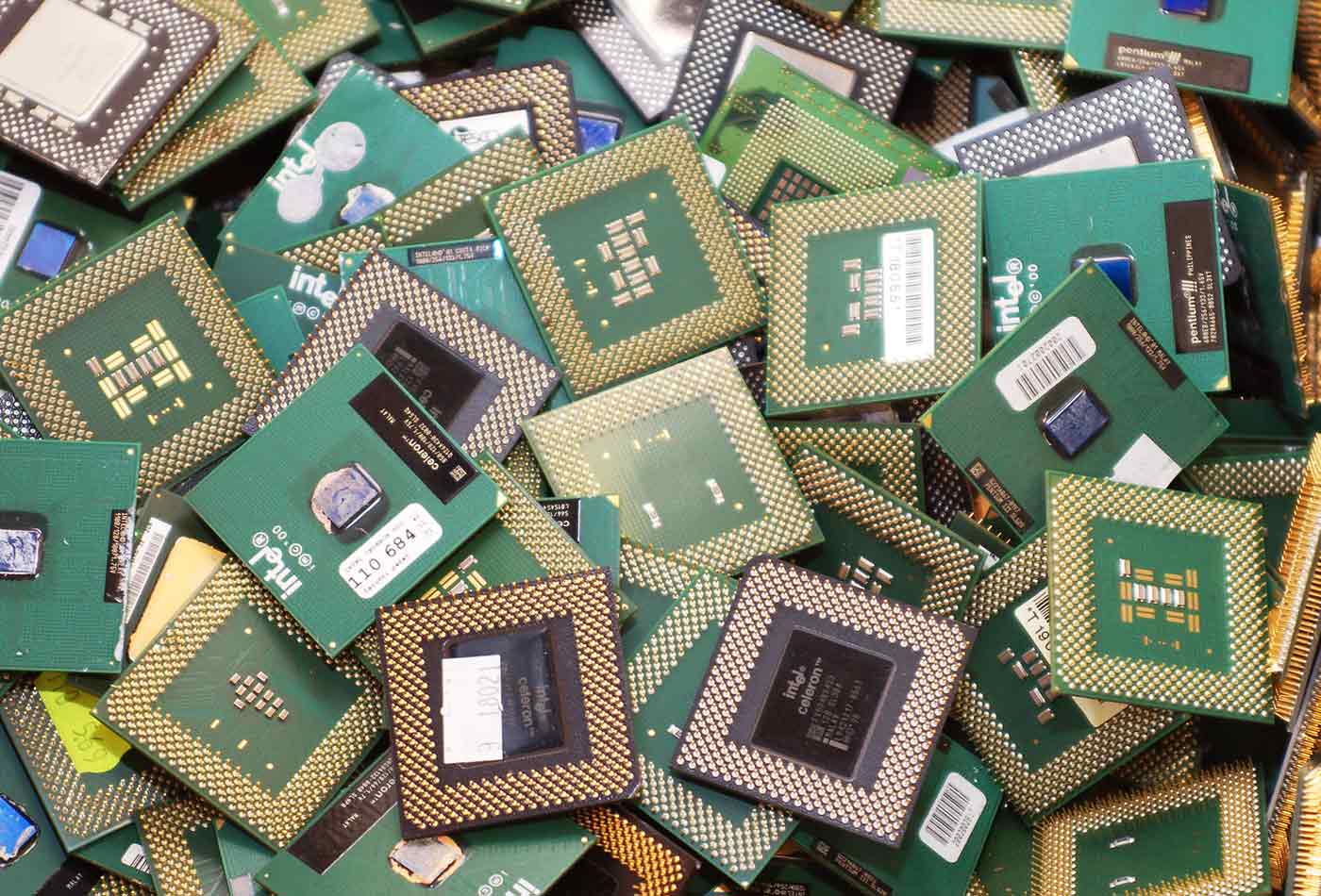 Environmental sensing—the process of gathering information from ecological systems—is an essential part of ecology and sustainable agriculture. However, sensors can be expensive and difficult for citizen scientists to obtain, even though their parts are all around us, in the form of technological waste. When a gadget breaks, it is often easier and cheaper to throw it away and purchase a new one than to attempt to repair it. Citizen scientists can take advantage of this unfortunate by-product of “throw away culture” by harvesting the sensor technology that is often found in e-waste. In this article, we discuss an approach to the development of such sensors.

When assessing and addressing environmental issues, especially at a local level, it is more advantageous to involve community members—those who are directly affected by such issues—than scientists and academics. Such an approach has been found to be both faster and more efficient, as dedication amongst local volunteers has been found to be much higher than those with little attachment or stake in the success of the project (Danielsen et al. 2010, 1166–1168). However, oftentimes there is very little funding and resources available to citizen scientists and thus necessitates support from non-local institutes.

There are a number of projects that purport to address exactly this issue. However as we traverse this technological landscape of citizen sensing, although the economic climate is shifting toward affordability, mass distribution of these devices (in detector arrays, for example) is still quite out of the scope of many budgets.

According to Sui and Elwood in “Crowdsourcing Geographic Knowledge”, there exists four levels of participation in citizen science activities.
The majority of the projects outlined here fall within the first two levels of engagement; however, this should not be interpreted as an inability for citizen scientists to participate in environmental sensing projects at higher levels. While there are many ecological sensing projects worthy of examination, to list them all would be well outside the scope of this paper; therefore only a select few are outlined.

One of the most polished options for citizen-scientist environmental sensing is the Smart Citizen project. The Smart Citizen Kit is billed as “an Open-Source Environmental Monitoring Platform consisting of arduino-compatible hardware, data visualization web API, and mobile app” (Smart Citizen 2014). It is the result of a crowdfunding effort on Kickstarter by Fab Lab Barcelona at the Institute for Advanced Architecture of Catalonia. The sensor board can measure air composition (CO and NO2), temperature, light intensity, sound levels, and humidity. It is capable of communicating data wirelessly to iOS devices via the Smart Citizen App. The kit itself consists of three boards: the ambient board, which houses the sensors; a data-processing board based on an ATMega32u4; and a Baseboard with USB socket, SD card reader, EEPROM, battery holder, and clock (The Smart Citizen Kit: Crowdsourced Environmental Monitoring 2014). The Smart Citizen Kit places a particular emphasis on large-scale collaboration. Users can register their sensor board on the Smart Citizen website and communicate their local conditions over the web. The result is an international “sensornet” that is openly available for anyone to make use of (Smart Citizen 2014). There are a number of shortcomings with the Smart Citizen, however, especially the price tag — the Smart Citizen kickstarter edition sells for 105 USD unassembled.This sensor would be considered a one or two on Sui and Elwood’s engagement scale because, currently, it only affords citizens the role of data collector and reporter.

According to the gardenbot.org website, GardenBot “is an open source garden monitoring system” (Frueh 2014). However, GardenBot is more than just a “garden monitoring system”; it is a comprehensive how-to on small-scale environmental monitoring. The bot itself is composed of an Arduino Uno as the “brain,” an LM335 temperature sensor, a small photocell (for monitoring light), and a moisture sensor made of galvanized wire. Furthermore, the system incorporates a water valve as the control for an automated watering system that responds to soil moisture levels. The system, despite being quite simple, has been featured on wired.com, treehugger.com, OpenSourceEcology, and SparkFun.com.

There are, however, a number of notable drawbacks to this system. Most notably is the fact that it must be connected to a PC. The system works on PC-Arduino serial communication and therefore requires a dedicated PC to run and thus does not allow for the sort of portability that one might hope from an environmental monitoring system. Moreover, because the system incorporates an Arduino board and a number of other components that must be purchased, the setup is not particularly scalable on a tight budget (an Arduino board alone is upwards of 40 USD). Given the rather involved nature of constructing the device—there is no option to order it pre-assembled—any citizen scientist working with it must have a fair bit of aptitude. Therefore, the GardenBot rises above the first and possibly the second level of engagement to level three “participatory science,” at least for the principal stages.

The Growerbot, another Arduino-based garden monitor, is billed as a “gamified gardening assistant”. The Growerbot is equipped with a soil probe, a temperature/humidity sensor, and a TSL2561 luminosity sensor. It is also WiFi-enabled with an Electric Imp connectivity platform for connecting to the Internet of Things, thus giving the Growerbot the capacity to share data both locally and over the web. The standard kit also contains an LCD interface and a light/pump controller. The final system is a handsome and well-polished device which is ready to be crowd-sourced.

The Problem of Electronic Waste

While purchasing commercially available tools for environmental sensing is an attractive option, introducing new technological mass into circulation would be a self-defeating exercise.

In 2012 alone, the average Canadian generated 24.72 kg of electronic waste. This is a staggering fact, given that the average Canadian consumed 28.59 kg of electronic products that same year (StEP 2014). In a year, we dispose of 86% of the electronics we purchase. Many of these items, if not disposed of properly, pose environmental and health hazards. Cathode ray tubes, for example, are known to leach heavy metals such as lead into groundwater. Gold-plated components such as IC’s discharge hydrocarbons and bromide into bodies of water, turning them acidic and killing fish. Plastics from electronics housings emit dioxins and hydrocarbons (Wath et al. 2011). In industrialized countries, these problems are well-managed with recycling and reclamation programs.

However, a good deal of electronic waste is exported to developing countries where there is little infrastructure to deal with it, and so those people are often forced to live alongside hazardous waste (Grossman 2006).

The irony of producing e-waste to develop environmental sensors is not lost on the researcher and it is, therefore, the philosophy of this project—so much as possible— that no new materials should be produced to develop it.

The intended final application of this project is an agricultural sensor grid spaced throughout a local crop field. To begin with, we consider three important growing variables for most crops: the amount of light received, the local temperature, and the local soil moisture (i.e., conductivity). Therefore, three separate sensors must be developed: a light-meter, a thermometer, and a conductivity sensor.

A new light meter is around $6 (Adafruit Industries 2014). While this is perfectly sensible for a single meter, scaling into the hundreds gets expensive. However, electronic waste is rife with photoresistors, which can be used as rudimentary luminosity sensors. However, a reading from a photoresistor will not be in the standard measurement of light (lumens), and we therefore must calibrate any photoresistor that we use for this purpose. Calibration can be accomplished by measuring the voltage across a photoresistor, as a light source provides different levels of light,and then comparing that value to a calibrated light meter. Because lab-grade light meters are not readily available, a simple solution is to use the light meter that most smartphone devices have. Using a three-level desk lamp as a light source and Sensor Logger by i-RealitySoft on a Samsung Galaxy Note 2 smartphone, we calibrated a simple photoresistor circuit to respond with acceptable accuracy. To do so, we plotted the average luminosity against the reading from our photoresistor, and we found a nearly linear relationship of lux = 5.3(lx/(unit/3v))*(resistor)-2401.5 lx with an R^2 of 0.97.

The MSP430G2553 microcontroller unit which serves as the “brain” of this project contains an internal temperature sensor that can be easily read via either a serial connection or an attached display. These chips are very common both in industrial applications and in commercial ones such as children’s toys. (Four-Three-Oh! 2012) Before attempting to utilize the internal temperature sensor, an exact idea of how accurate it is must be determined.

The procedure for cross-checking the temperature was simple: a digital house thermometer was placed next to the MSP430 Launchpad Development board, which was in turn connected via serial over USB to a computer where the temperature was read out. Randomly over a week the temperatures read by both devices were recorded and compared.

Over 30 samples recorded during the week, the average percent error was approximately 2.4%. Although this is certainly not lab-quality scientific accuracy, as a makeshift environmental sensor, this small bit of seemingly systematic error is quite acceptable.

To determine the moisture of soil, a pair of galvanized nails are soldered to a pair of wires, with one lead connected to +3.3 V and the other connected via a 10K pull-down resistor and to an analog input on the MSP430. The simple idea behind this setup is that as moisture is added to the soil, it becomes more conductive and thus there is less and less resistance between the sensor nail and the voltage source nail. To test this, three quarters of a cup of potting soil was placed in a cup with the nails spaced a few centimeters apart, and water was added in one-eighth cup increments until the soil was saturated. The values were recorded over the serial port and plotted to examine what constitutes “underwatering” and “overwatering”. It was found that in completely dry soil, the reading is nearly zero. Once the first 1/8 cup of water is added, that value changes quickly to be around 600. Another 1/8 cup brings the value up to a little over 650, and it appears to max out at around 700, whereby the soil is saturated with water.

With the sensors (mostly) working, a final build to enclose the sensors was constructed. The components were removed from the breadboard and soldered directly to a small prototyping PCB. A recycled pill bottle was chosen as a housing, and a 3 V coin-cell battery installed. Holes for the moisture sensor probes and the light sensor were drilled on the bottom and top, respectively. Hot glue served to water-tighten the ports for the sensors.

While it is yet to be tested, the final build is meant to be watertight and weather- resistant, with the ability to survive an entire season in a field or garden. Afterward, the capsule can be extracted and the chip removed from the device. The data periodically stored to the nonvolatile flash memory within the MSP430 can then be collected and interpreted. It is intended that the final product will fall within the first level of citizen science involvement, allowing volunteers to passively collect data (literally burying the equipment in the ground and forgetting about it) without needing to concern themselves with the broader work.

Here we described building a sensor system constructed entirely of electronic waste as a way for citizen scientists to participate in mass sensing without spending much money.