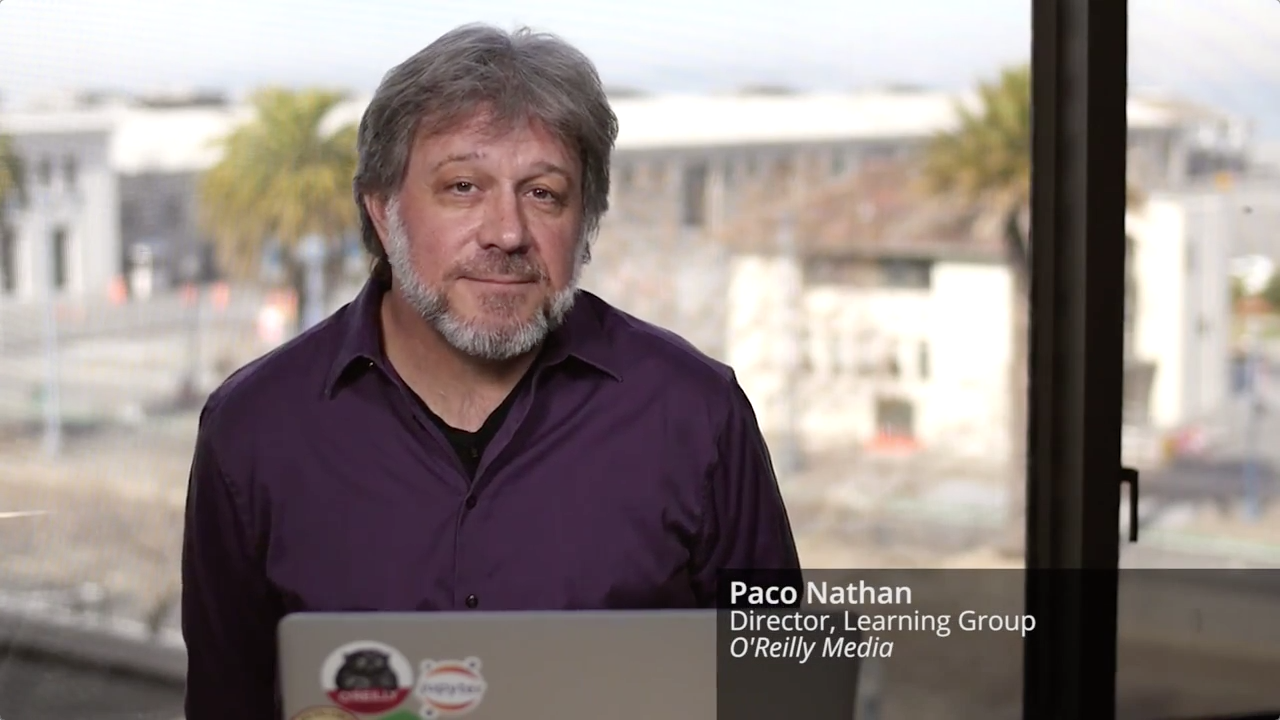 Probabilistic Data Structures represent a relatively new area of algorithms.
Notably, the mathematician Philippe Flajolet gets credited with early work, though a number of different people contributed in the examples shown here.

You may also hear the terms approximation algorithms, sketch algorithms, or online algorithms used to describe the same body of work.
These are proving useful for analytics with large-scale data and streaming applications, and especially for use cases that have both.

The big idea here is that these approaches provide approximations with error bounds.
The amount of acceptable error is generally a trade-off for less system resources, such as memory or compute time.
Parameters adjust those error bounds, and also determine the resources required for a given application.

This notebook shows Python sample code for a few of the more well-known examples of probabilistic data structures, including:

We’ll need some interesting data to help illustrate how these algorithms work.
Let’s create a data set from the text of Jabberwocky by Lewis Carroll.

For comparison, we’ll use text from another poem, Daylight Saving by Dorothy Parker.

Next, let’s define a simple Python function to construct lists of words from these poems.

For some comparisons we’ll also need a list of the unique words in one of the poems.

Cardinality is another way of describing how to count the elements in a set.
Let’s use HyperLogLog to implement a probabilistic counter. We’ll count the total number of words in one of the poems.

The main idea here is that when you have a very large collection of things, counting becomes a problem.
In Python, the long integers have unlimited precision, so you can count really large sets as long as you have a lot of memory to use.
What if you don’t want to use up your application’s memory?
What if you need that memory for other purposes?
For example, imagine needing to compare the number of followers on Twitter, when the comparision is between an average user who has about 200 followers and Lady Gaga who has more than 50 million followers.
Do you really care whether Lady Gaga has 50,000,000 or 50,000,100 followers?
The difference is noise anyway, so why waste lots of application memory?
What if there are many celebrities to count and compare?
Instead, approximate.

The HyperLogLog algorithm was first described in a paper by Flajolet in 2007.
This example uses a Python implementation by Vasily Evseenko.

Note that the code in this example is configured to accept a 1% counting error. We’ll compare the approximated count with the actual count to measure the observed error rate.

Great, those results show how the bounded error rate works as expected.

One interesting property of a BloomFilter is that false negatives are not possible.
So the main idea here is that we can load a set, then test elements to see if they are included in the set.
Some small number of elements that aren’t in the set will test positive.

The BloomFilter was first described in a paper by Burton Bloom in 1970.
This example uses a Python implementation by Jay Baird.

Eight words in common.
Similarly, this approach can be used in database queries, when one side of JOIN is much smaller than the other.

Thinking about that example above, what if you simply needed an estimate of the number the words in common between the two poems?
What if you have many sets and need quick comparisons about how similar they are?

For example, suppose you want to test a large number of documents for potential plagiarism?
Comparing the similarity of the documents would provide a quick estimate — enough to weed out the documents that were clearly not similar to each other.

The MinHash algorithm was first described in a paper by Andrei Broder in 1997.
This example uses a Python implementation by Eric Zhu.

Here we’ll estimate the similarity between the words in the two poems.

An estimate of 7.4% similarity versus a measure of 7.0% actual similarity, based on the Jaccard index.
In any case, we’re fairly certain that Dorothy Parker didn’t plagiarize Lewis Carroll.

Frequency Summaries are another way of describing the frequency of events in a data stream.
Think: leaderboards used for online competitions, etc.

The main idea is that we want to measure and compare which events are occurring most frequently, and we probably don’t care about the events that occur less often.
The precision of the frequencies isn’t particularly imporant.

We’ll use Count-min sketch for frequency summaries, to implement a probabilistic word count on one of the poems.

The Count-Min Sketch algorithm was first described in a paper by Graham Cormode and S. Muthukrishnan in 2005.
This example uses a Python implementation by Isaac Sijaranamual.

Let’s take a look at the counts for common words…

One practical example would be in language detection: comparing frequencies for the most commonly occuring words is a simply way to predict the language in which a document was written.

Next, let’s look at where the estimates in the sketch differed from actual counts:

Okay, that was way better than writting 50 lines of Java code for a Hadoop application.

Imagine that you have a large stream of data.
Perhaps you have an application that must measure that stream continually, where stopping to count simply isn’t an option.
Suppose you’re monitoring ecommerce transations, trying to detect credit card fraud?
Some measure become important (e.g., average order price).
Approximating metrics on a stream is a great way to build applications that are more robust and operate in real-time.

The t-Digest algorithm was first described by Ted Dunning and Otmar Ertl in 2013.
This example uses a Python implementation by Trademob GmbH.

In this case, we’ll skip the poems.
Instead let’s generate a stream of random numbers and look at its head, median, and tail.

The pseudo-random number generator in Python provides something close to a uniform distibution.
In other words, it’s flat.

These methods for approximation present a very different way of thinking about how to build applications and architectures for Big Data. For example, one immediate outcome is that we can query different time ranges of data by composing the hashes. Rather than have one SQL query for day/day metrics, then another SQL query for week/week metrics, simply compose the hashed approximations for the seven days of the week. That implies much less data being stored, and significantly less computation required for reporting.

In the big picture, the implications of these algorithms cut much deeper. Looking at the history of Statistics over the past two centuries, much of the emphasis had been on defensibility. One would collect a data set, fit it to a known probability distribution, then make inferences from that model. The math was rigorous, it could generally hold up in court during expert testimony, or say during FDA drug trials for new pharmaceuticals.

However, that approach to working with data also led to our notion of a batch window. Capture data during one phase, fit to a model during another phase, then use the inferences in a third phase — with lots of time lag between phases.

About 15 years ago, the industry crossed a threshold, largely due to rapidly increasing data rates at early ecommerce firms and their automated use of machine learning with that data for their products: recommender systems, search engines, anti-fraud classifiers, etc. With these kinds of use cases, there was no time to have an expert make inferences based on data modeling techniques that would be defensibly in court. Rather, the business case was to use data in near real-time, automating ML and inferences. In other words, predictability in lieu of defensibility. Batch windows became a bottleneck. Our concepts of applied mathematics had become a bottleneck. Leo Breiman captured much of that fundamental sea change in the 2001 paper,
Statistical Modeling: The Two Cultures. I highly recommend reading that.

By using probabilistic data structures, we invert that bottleneck. Calculate error bounds in advance, probabilistically, so that well-formed approximations get built into data collection directly. Then we don’t have to stop to take a batch window, stop to fit a model, etc. Moreover, we can sample the results that we need, at any point within a real-time stream.

The results have huge implications for how we leverage system resources. Trade-off a few percentage points of error bounds, and reduce the required memory footprint by a couple orders of magnitude. What’s not to like about that?

A phrase has been used among data science teams at Twitter: “Hash, don’t sample” by Oscar Boykin.

Two of the better introductions to the math involved here are:

For code in Scala, the Algebird library by Avi Bryant and Oscar Boykin provides an excellent framework for working with approximation algorithms.

BlinkDB is a project that leverages a variety of approximation techniques for accelerating SQL queries on data at scale, and has been incorporated into Spark SQL.