The current state of machine intelligence 3.0

Watching the appeal and applications of machine intelligence expand. 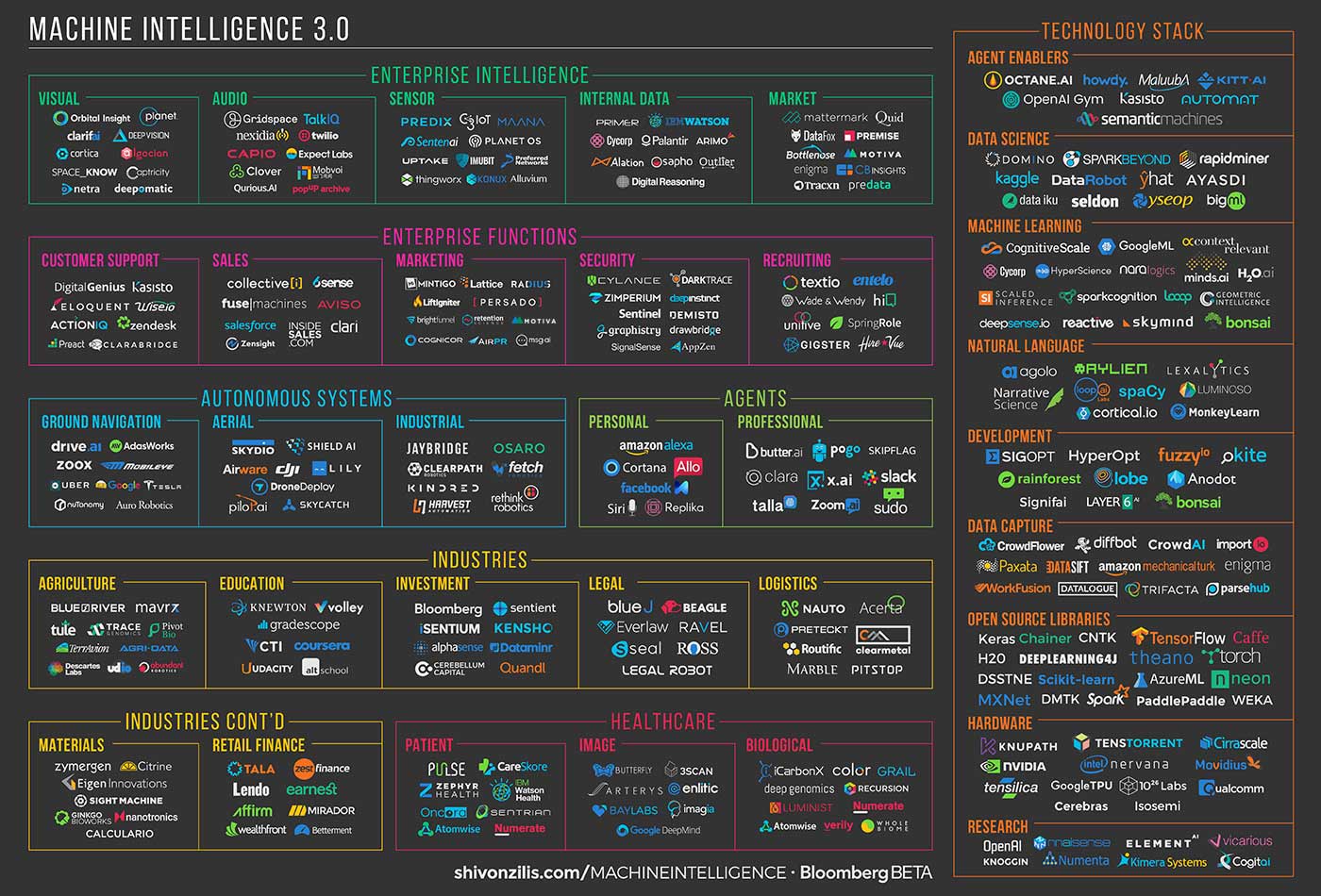 Almost a year ago, we published our now-annual landscape of machine intelligence companies, and goodness have we seen a lot of activity since then. This year’s landscape has a third more companies than our first one did two years ago, and it feels even more futile to try to be comprehensive, since this just scratches the surface of all of the activity out there.

At the same time, the hype around machine intelligence methods continues to grow: the words “deep learning” now equally represent a series of meaningful breakthroughs (wonderful) but also a hyped phrase like “big data” (not so good!). We care about whether a founder uses the right method to solve a problem, not the fanciest one. We favor those who apply technology thoughtfully.

What’s the biggest change in the last year? We are getting inbound inquiries from a different mix of people. For v1.0, we heard almost exclusively from founders and academics. Then came a healthy mix of investors, both private and public. Now overwhelmingly we have heard from existing companies trying to figure out how to transform their businesses using machine intelligence.

For the first time, a “one stop shop” of the machine intelligence stack is coming into view—even if it’s a year or two off from being neatly formalized. The maturing of that stack might explain why more established companies are more focused on building legitimate machine intelligence capabilities. Anyone who has their wits about them is still going to be making initial build-and-buy decisions, so we figured an early attempt at laying out these technologies is better than no attempt.

Many of the most impressive looking feats we’ve seen have been in the gaming world, from DeepMind beating Atari classics and the world’s best at Go, to the OpenAI gym, which allows anyone to train intelligent agents across an array of gaming environments.

The gaming world offers a perfect place to start machine intelligence work (e.g., constrained environments, explicit rewards, easy-to-compare results, looks impressive)—especially for reinforcement learning. And it is much easier to have a self-driving car agent go a trillion miles in a simulated environment than on actual roads. Now we’re seeing the techniques used to conquer the gaming world moving to the real world. A newsworthy example of game-tested technology entering the real world was when DeepMind used neural networks to make Google’s data centers more efficient. This begs questions: What else in the world looks like a game? Or what else in the world can we reconfigure to make it look more like a game?

Ah, the great chatbot explosion of 2016, for better or worse—we liken it to the mobile app explosion we saw with the launch of iOS and Android. The dominant platforms (in the machine intelligence case, Facebook, Slack, Kik) race to get developers to build on their platforms. That means we’ll get some excellent bots but also many terrible ones—the joys of public experimentation.

The danger here, unlike the mobile app explosion (where we lacked expectations for what these widgets could actually do), is that we assume anything with a conversation interface will converse with us at near-human level. Most do not. This is going to lead to disillusionment over the course of the next year but it will clean itself up fairly quickly thereafter.

When our fund looks at this emerging field, we divide each technology into two components: the conversational interface itself and the “agent” behind the scenes that’s learning from data and transacting on a user’s behalf. While you certainly can’t drop the ball on the interface, we spend almost all our time thinking about that behind-the-scenes agent and whether it is actually solving a meaningful problem.

We get a lot of questions about whether there will be “one bot to rule them all.” To be honest, as with many areas at our fund, we disagree on this. We certainly believe there will not be one agent to rule them all, even if there is one interface to rule them all. For the time being, bots will be idiot savants: stellar for very specific applications.

We’ve written a bit about this, and the framework we use to think about how agents will evolve is a CEO and her support staff. Many Fortune 500 CEOs employ a scheduler, handler, a research team, a copy editor, a speechwriter, a personal shopper, a driver, and a professional coach. Each of these people performs a dramatically different function and has access to very different data to do their job. The bot / agent ecosystem will have a similar separation of responsibilities with very clear winners, and they will divide fairly cleanly along these lines. (Note that some CEO’s have a chief of staff who coordinates among all these functions, so perhaps we will see examples of “one interface to rule them all.”)

You can also see, in our landscape, some of the corporate functions machine intelligence will re-invent (most often in interfaces other than conversational bots).

Other companies are struggling to figure out what to do, as many boardrooms did on “what to do about the Internet” in 1997. Why is this so difficult for companies to wrap their heads around? Machine intelligence is different from traditional software. Unlike with big data, where you could buy a new capability, machine intelligence depends on deeper organizational and process changes. Companies need to decide whether they will trust machine intelligence analysis for one-off decisions or if they will embed often-inscrutable machine intelligence models in core processes. Teams need to figure out how to test newfound capabilities, and applications need to change so they offer more than a system of record; they also need to coach employees and learn from the data they enter.

Unlike traditional hard-coded software, machine intelligence gives only probabilistic outputs. We want to ask machine intelligence to make subjective decisions based on imperfect information (eerily like what we trust our colleagues to do?). As a result, this new machine intelligence software will make mistakes, just like we do, and we’ll need to be thoughtful about when to trust it and when not to.

The idea of this new machine trust is daunting and makes machine intelligence harder to adopt than traditional software. We’ve had a few people tell us that the biggest predictor of whether a company will successfully adopt machine intelligence is whether they have a C-Suite executive with an advanced math degree. These executives understand it isn’t magic—it is just (hard) math.

Machine intelligence business models are going to be different from licensed and subscription software, but we don’t know how. Unlike traditional software, we still lack frameworks for management to decide where to deploy machine intelligence. Economists like Ajay Agrawal, Joshua Gans, and Avi Goldfarb have taken the first steps toward helping managers understand the economics of machine intelligence and predict where it will be most effective. But there is still a lot of work to be done.

We’ve been wondering about the path to grow into a large machine intelligence company. Unsurprisingly, there have been many machine intelligence acquisitions (Nervana by Intel, Magic Pony by Twitter, Turi by Apple, Metamind by Salesforce, Otto by Uber, Cruise by GM, SalesPredict by Ebay, Viv by Samsung). Many of these happened fairly early in a company’s life and at quite a high price. Why is that?

This absence of a market today makes it difficult for a machine intelligence startup, especially horizontal technology providers, to “grow up”—hence the Peter Pans. Companies we see successfully entering a long-term trajectory can package their technology as a new problem-specific application for enterprise or simply transform an industry themselves as a new entrant (love this). We flagged a few of the industry categories where we believe startups might “go the distance” in this year’s landscape.

Established players like Conservation Metrics and Vulcan Conservation have been using deep learning to protect endangered animal species; the ever-inspiring team at Thorn is constantly coming up with creative algorithmic techniques to protect our children from online exploitation. The philanthropic arms of the tech titans joined in, enabling nonprofits with free storage, compute, and even developer time. Google partnered with nonprofits to found Global Fishing Watch to detect illegal fishing activity using satellite data in near real time, satellite intelligence startup Orbital Insight (in which we are investors) partnered with Global Forest Watch to detect illegal logging and other causes of global forest degradation. Startups are getting into the action, too. The Creative Destruction Lab machine intelligence accelerator (with whom we work closely) has companies working on problems like earlier disease detection and injury prevention. One area where we have seen some activity but would love to see more is machine intelligence to assist the elderly.

In talking to many people using machine intelligence for good, they all cite the critical role of open source technologies. In the last year, we’ve seen the launch of OpenAI, which offers everyone access to world class research and environments, and better and better releases of TensorFlow and Keras. Non-profits are always trying to do more with less, and machine intelligence has allowed them to extend the scope of their missions without extending budget. Algorithms allow non-profits to inexpensively scale what would not be affordable to do with people.

We also saw growth in universities and corporate think tanks, where new centers like USC’s Center for AI in Society, Berkeley’s Center for Human Compatible AI, and the multiple-corporation Partnership on AI study the ways in which machine intelligence can help humanity. The White House even got into the act: after a series of workshops around the U.S., they published a 48-page report outlining their recommendations for applying machine intelligence to safely and fairly address broad social problems.

Curious minds want to know. If you’re working on a unique or important application of machine intelligence we’d love to hear from you.

We see all this activity only continuing to accelerate. The world will give us more open sourced and commercially available machine intelligence building blocks, there will be more data, there will be more people interested in learning these methods, and there will always be problems worth solving. We still need ways of explaining the difference between machine intelligence and traditional software, and we’re working on that. The value of code is different from data, but what about the value of the model that code improves based on that data?

Once we understand machine intelligence deeply, we might look back on the era of traditional software and think it was just a prologue to what’s happening now. We look forward to seeing what the next year brings.