155
17
Tray Scrubbers
17.1 DEVICE TYPE
Tray scrubbers are wet scrubbers that use a tray or multiple trays containing open-
ings through which gas is accelerated to subsequently mix with scrubbing liquid,
thereby enhancing particulate removal and gas absorption.
17.2 TYPICAL APPLICATIONS AND USES
Tray scrubbers are used for the control of particulate greater than approximately 10
μm at loadings less than 1 to 2 grs/dscf (grains per dry standard cubic foot) and to
absorb soluble gases. They are also often used for cooling gas streams and to sub-
cool gases.
In years before the Clean Air Act (1970), tray scrubbers were used to control
the emissions from lime kilns, lime sludge kilns, boilers, tanker inert gas systems,
sludge incinerators, and similar applications where particulate and soluble gases
(usually acidic gases) must be removed simultaneously. As the air pollution control
regulations tightened, higher efciency wet devices, such as Venturi scrubbers, and
dry devices, such as baghouses, became more popular. Tray scrubbers continue to be
used as gas cleaning and conditioning devices, often in concert with other devices.
Tray scrubbers are not used where large-diameter particulate may plug the open-
ings in the trays. They are also avoided where the loading of dust is high (above 2
grs/dscf) for the same reason. You often see tray scrubbers successfully used after
primary particulate devices. For example, they are used for gas cooling and plume
suppression after Venturi scrubbers on municipal sludge incinerators and after bag-
houses to remove SO
2
and HCl from waste incinerators.
17.3 OPERATING PRINCIPLES
Tray scrubbers use one or more punched, perforated, drilled, or woven trays (usually
at) over which scrubbing liquid is passed. Gases containing particulate and absorb-
able gases are passed through these openings wherein the gas is accelerated, increas-
ing its kinetic energy. The gas impacts into this liquid passing over the tray and in
doing so transfers its energy into the liquid, causing a froth, or bubbling, turbulent
zone of high surface area. The liquid typically passes over the tray, usually over a
weir to stabilize the liquid depth, then descends through a downcomer to the next
lowest tray or leaves the scrubber vessel via an external drain.
Figure17.1 shows a tray scrubber in isometric view. It consists of a low-level gas
inlet, a spray assembly to clean the face of the tray, a removable anged grid assem-
bly, a liquid inlet and distribution weir box, internal downcomer, a vane type droplet
eliminator (the turbine-shaped device at the top), and the gas outlet at the top. 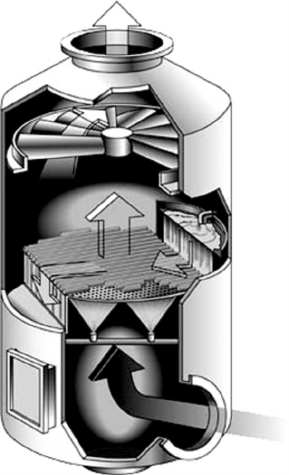 156 Air Pollution Control Equipment Selection Guide
Some trays are equipped with bafes immediately opposite the tray holes or per-
forations. These are called impingement tray scrubbers because the gas impinges on
the bafes. These trays generally offer greater particulate removal given the impac-
tion action. Figure 17.2 shows the basic components of a tray scrubber. The gas inlet
injects the gas stream into a zone below the tray section. Quite often preconditioning
sprays (as shown) are used to saturate the gas stream so that the gas stream charac-
teristics are more uniform as the gas enters the tray openings. A uniform gas ow
serves to provide a more stable pressure drop across the width of the tray. These
sprays may be oriented downward, upward or both. An upward spray serves to clean
the lower side of the tray. The trays are oriented horizontally and must be level in
order to achieve uniform liquid distribution. The liquid is distributed using weirs and
downcomers. The “end weir” serves to hold up liquid on the tray and inuences the
pressure drop across the tray since the rising gas must penetrate that liquid depth.
The downcomer allows the scrubbing liquid to exit the tray and move to the next
lower tray (or to the sump as is the case with the lowest tray) while preventing gases
from “sneaking” around the tray and as a result reducing the tray contact efciency.
The downcomer of a customized tray is shown in Figure17.3. The downcomer
bafe serves to prevent the gas ow from bypassing the tray by going up the down-
comer. Obviously, the liquid depth in the downcomer seal leg must be deep enough
to provide a suitable liquid seal.
Trays with larger openings are called sieve tray scrubbers and are used primarily
for gas absorption. If the gas velocity is insufcient to keep the liquid on top of the
FIGURE17.1 Impingement tray scrubber (Sly, Inc.).