Apple Boot Camp Public Beta First Look
•
A blank, recordable CD.
•
At least 5 GB of available space on your Mac’s current boot drive.
In addition, you’ll probably nd the following helpful:
•
A multibutton mouse. Although the Mac supports multibutton
mice, Windows is much more dependent on them for everyday use.
You’ll be able to get through installation and conguration with
a single-button mouse, but if you intend to use Windows apps for
serious work, you’ll want a mouse with more than one button.
•
A bottle of ibuprofen. OK, OK, this isn’t essential, but come on—
you’re a Mac user, and you’re about to install Windows! This exer-
cise falls plainly into the “You never thought it could happen to
you” category.
Bear in mind that Boot Camp currently is beta software. Although
Apple said Boot Camp will be a feature in the next major release of
the Mac OS, if you choose to install it now, you’re essentially opting
to become an unpaid software tester. With that said, know that Boot
Camp is very stable and works well. Certain aspects of installation may
seem a little rough around the edges, but overall, you should nd that
installing and running Windows XP on your Mac is easy.
Installing Boot Camp
If you’ve gathered all the items mentioned in the previous section,
you’re ready to begin. A full Boot Camp installation will probably take
you about an hour. You’ll be able to leave your Mac unattended for a
lot of that time. If you’re running on a Mac laptop, it’s best to plug it in
to ensure that it’s got power to get through the whole installation.
Step 1: Back up your Mac
Windows requires its own partition on your hard drive (a partition is
a separate logical space on your drive that is treated like a completely
independent hard drive). The Boot Camp installer will take care of
partitioning your drive for you, and you don’t have to erase or reformat 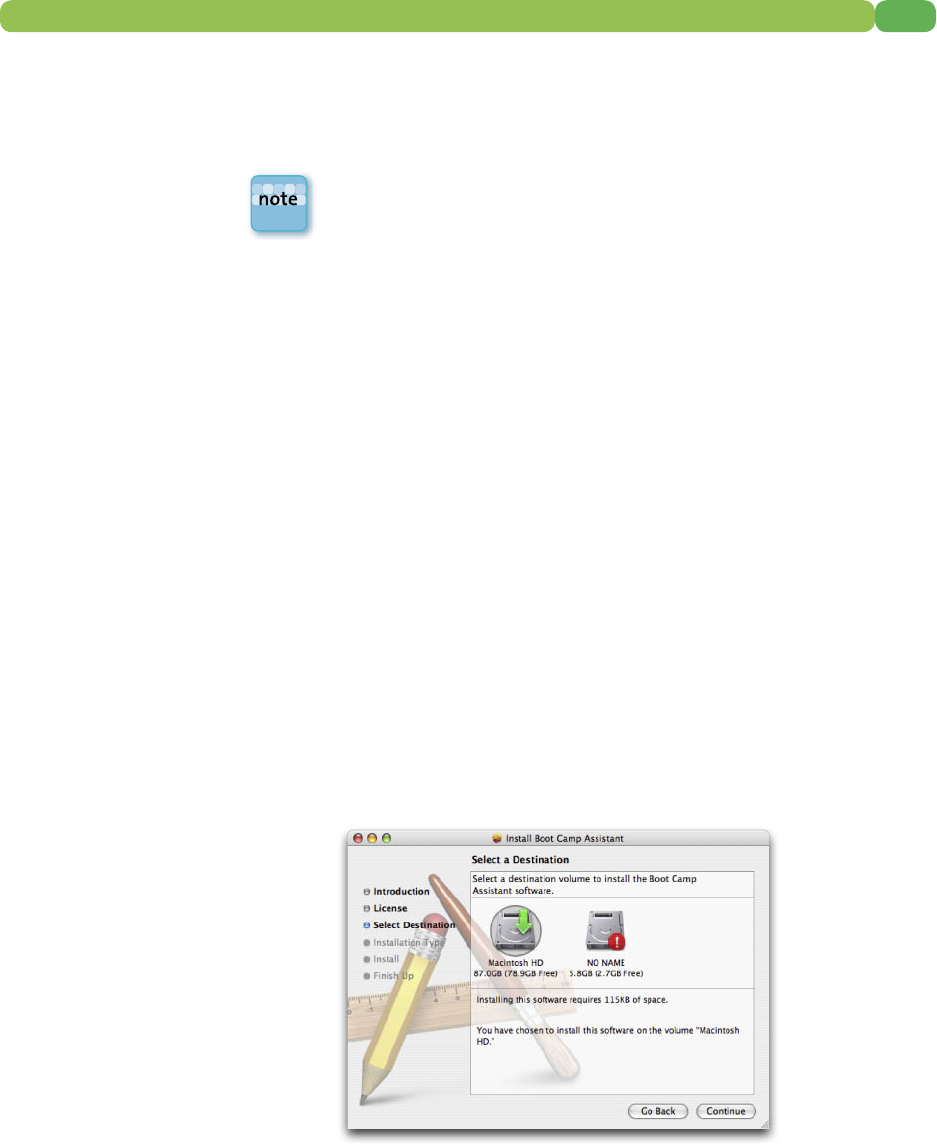 Apple Boot Camp Public Beta First Look
the drive to perform this step. Because things can go wrong, however,
it’s best to back up important data on your Mac before partitioning.
Just to reiterate here: Make a current backup of your Mac—documents,
les, settings, applications, music you’ve purchased through iTunes—
everything. Boot Camp makes some serious changes to your Mac. A
few users have reported that after installing Boot Camp, they were
unable to boot back into Mac OS X and had to gut their entire drive
and rebuild it. If you have to wipe your hard disk clean and reinstall
everything again, it will cost you all your data if you haven’t done a
proper backup.
Step 2: Download Boot Camp
While you’re backing up, you can start downloading the Boot Camp
Assistant installer. The Boot Camp download doesn’t include Windows;
instead, it includes the Boot Camp Assistant application, which you’ll
use to congure or uncongure your machine for a Windows installa-
tion. It also includes Apple’s documentation for the Boot Camp install.
You can download the 83 MB Boot Camp Assistant installer from
www.apple.com/macosx/bootcamp.
Step 3: Install Boot Camp Assistant
When the Boot Camp download is nished, the Boot Camp Assistant
installer will launch automatically. Follow the onscreen instructions
to install.
Installing Boot Camp  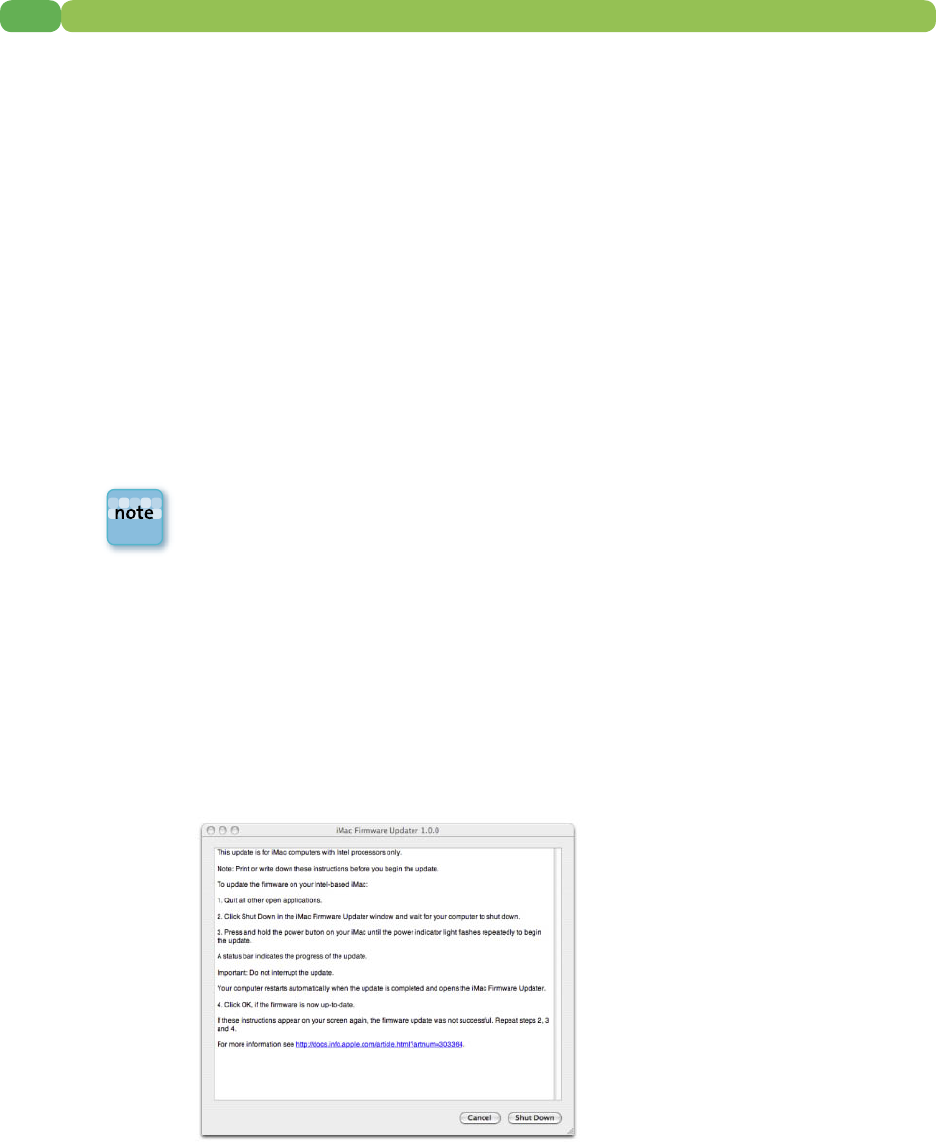 Apple Boot Camp Public Beta First Look10
Step 4: Print the Boot Camp Assistant manual
The Boot Camp Assistant disk image should still be mounted on
your desktop. Double-click to open it; then double-click the Boot
Camp Installation and Setup Guide. The document will open in your
default PDF reader. It’s a very good idea to print this document before
installing, as it contains some useful information, and you won’t be
able to get to this le when you’re booted into Windows.
Step 5: Download the rmware updater
As explained earlier, Boot Camp requires that your Mac have specic
rmware. Even if your Mac is fairly new, it still may not have the very
latest rmware. Go to www.apple.com/support/downloads, and look
for a rmware updater for your model of Macintosh.
Software Update won’t necessarily nd rmware updates for your Mac;
you need to go to the Web page and look.
Step 6: Upgrade your rmware
When your backup process and Boot Camp downloads are nished,
you can run the rmware updater that you downloaded in step 5.
Firmware updating requires a restart, so if your Mac is doing some-
thing that shouldn’t be interrupted, you’ll want to wait for it to nish.
When the download is complete, the updater will launch automati-
cally. Follow the onscreen instructions to perform the rmware update.