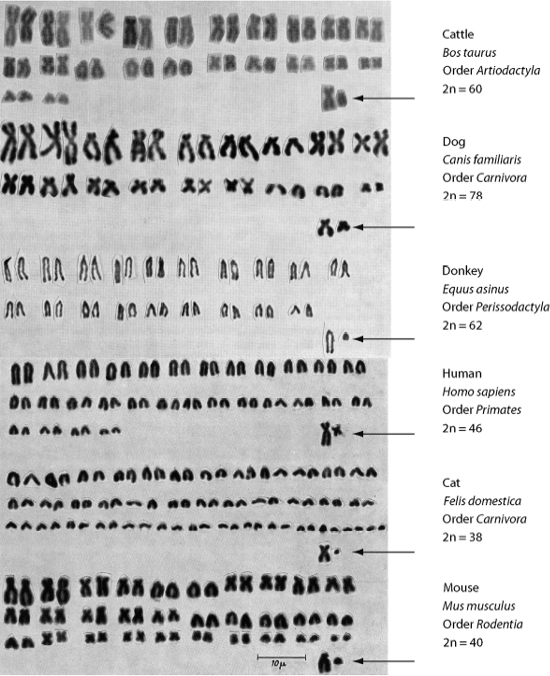 Plants, fungi, Paramecia, and many other organisms have undergone one or more rounds of whole genome duplication. For placental mammals this is no longer an option because the sex differentiation system (with females having XX sex chromosomes and males XY) would be disrupted by whole genome duplication, leading to sterility. Susumu Ohno (1928–2000) discussed this in his 1967 book Sex Chromosomes and Sex-Linked Genes. He reviewed evidence that the X and Y chromosomes (or Z and Win avian and ophidian [snake] species) were derived from an ancient pair of homologous chromosomes. Of these the X chromosome has maintained a remarkably similar size, while the Y chromosome has undergone rapid reduction in size. This figure (Ohno, 1967, fig. 11) shows the male diploid karyotypes of six species of placental mammals (cattle, dog, donkey, human, cat, and mouse). While there is great variability in the number of chromosomes among mammals, the X chromosomes (indicated by arrows next to the Y chromosomes) have maintained a relatively constant size. Used with permission.

Eukaryotic Genomes: From Parasites to Primates

In this chapter we will explore individual eukaryotic genomes, from parasites to primates. We will refer to a phylogenetic tree of the eukaryotes that was produced by ...