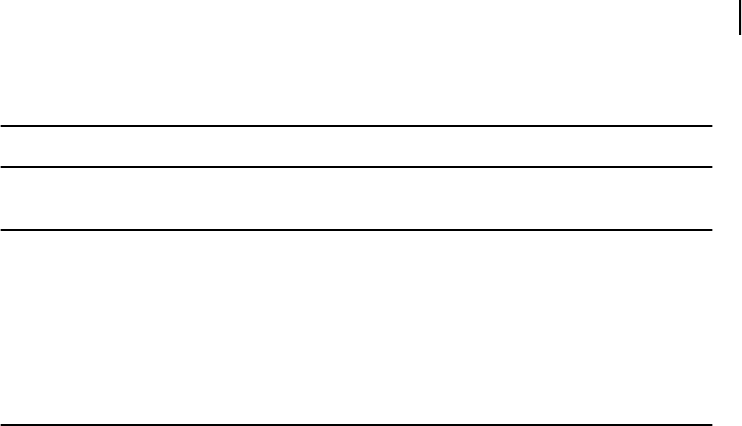 Biodegradable Elastomeric Polymers and MEMS in Tissue Engineering 51
Table 3 . 3 A comparison of the thermal and mechanical properties of PTMC and its
co-polymers.
Thermal Properties Mechanical Properties
Polymer Name MW T
g
(
◦
) T
m
(
◦
) Modulus Peak Stress Break Strain
(MPa) (Mpa) (%)
Low MW PTMC 42,100 −15 − 2.94 0.49 160
High MW PTMC 324,000 −19 − 6 12 830
DLLA 21 TCM 79
a
358,000 −9 − 5 2 270
DLLA 80 TCM 20
a
718,000 33 − 1900 46 7
DLLA 50 TCM 50
a
644,000 11 − 16 10 570
CL 23 TCM 77
a
246,000 −25 − 3.9 0.8 103
CL 75 TCM 25
a
183,000 −55 5.7 4.6 0.1 236
CL 90 TCM 10
a
184,000 −22 49.9 252 40 906
a
Denotes the mol % of each monomer in the co-polymer.
scaffolds were also fabricated into tubular constructs to evaluate their effectiveness
as vascular grafts. The tubular scaffolds were evenly seeded with mouse derived
smooth muscle cells using a rotational vacuum seeding technique. Tubular con-
structs prepared by this method had burst pressure and suture retention values
which closely matched that of native arteries.
79
In addition to vascular engineering, biodegradable polyurethanes based on
methylene diphenyl diisocyanate (MDI) as the diisocyanate component have
also been used as scaffold materials for ligament tissue engineering. PHB/PV
based polyurethanes have also been investigated as bioresorbable nerve guide
materials.
80
The nerve guides fabricated form these polyurethanes were degrad-
able and supported nerve regeneration with reduced inﬂammatory response.
3.3.3 Polycarbonates
Polycarbonates are a family of block co-polymers, which are characterized by the
presence of a carbonate bond in the backbone of the polymer chain. To date,
the two major classes of biodegradable polycarbonates that have been extensively
studied for biomedical applications are the co-polymers of poly(1,3–trimethylene
carbonate), and tyrosine derived polycarbonates. The latter family of materials has
a glass transition temperature ranging from 52–90
◦
C, making it a rigid material
at room temperature. Since the scope of this discussion is limited to elastomeric
materials, tyrosine derived polycarbonates have been omitted.
Poly(1,3–trimethylene carbonate) (PTMC) is an amorphous polymer, which
was ﬁrst synthesized by Zhu et al. through a bulk ring open polymerization of
1,3–trimethylene carbonate in the presence of catalysts.
81
PTMCs were found to
be rubbery materials at room temperature, and displayed low glass transition
temperatures ranging from −26
◦
Cto−15
◦
C. Further properties of PTMCs are
covered in Table 3.3.
SO13997_text.indd 59SO13997_text.indd 59 26/01/2011 3:50 PM26/01/2011 3:50 PM

52 R. Tran et al.
In addition to moderate elastomeric properties, the utility of homopolymeric
PTMC as a temporary implant material was hampered by its slow degrada-
tion. Over a 30 week period, the PTMC samples suffered a mass loss of only
9%. However, subcutaneously implanted PTMC samples were rapidly degraded
in vivo, and the implanted samples beyond a 3 week period could not be detected
macroscopically.
82
This was attributed to hydrolytic resistance and enzymatic
cleavage of the carbonate bonds. Co-polymerization with other polymers, primar-
ily degradable polyesters like poly(D,L lactide) (PDLLA) and poly(ε–caprolactone)
(PCL), have been employed to improve the degradability and the mechanical
properties of polycarbonates.
82−84
The potential of these co-polymers as scaffolds for heart tissue engineering and
synthetic nerve guides for nerve regeneration have also been evaluated.
85−87
It was
also found that high molecular weight PTMC was very ﬂexible and tough due to
the excellent ultimate stress and strain characteristics. These mechanical properties
were attributed to strain induced crystallization of the polymeric network upon
application of high deforming stresses. This phenomenon has also been studied
extensively elsewhere.
88
3.3.3.1 Poly(D,L Lactide–co– 1,3–trimethylene carbonate)
Both high molecular weight and low molecular weight co-polymers of amorphous
poly(D,L–lactide) and PTMC have been studied by different researchers.
84,89,90
In all cases, the co-polymer synthesis was carried out through a bulk ring open
polymerization of the different monomer ratios with stannous octoate as the cata-
lyst. High molecular weight poly(DLLA–co–TMC) co-polymers were obtained by
varying the reaction conditions to reduce the degree of transesteriﬁcation. The low
molecular weight co-polymers were synthesized using 1,3–trimethylene carbonate
with a T
g
value of −26
◦
C.
81,89
As expected, the co-polymerization was able to produce co-polymers, which
had properties that were intermediate to those of the PDLLA and PTMC ho-
mopolymers. The T
g
temperatures of the co-polymers ranged from −16 − 56
◦
C
depending on the percentage of lactide units in the chain. Co-polymers with a
greater lactide percentage had higher T
g
temperatures, and were generally stiffer.
The mechanical properties of the different polymers ranged from weak elastomers
to stiff and rigid materials. TMC–DLLA co-polymers with a higher TMC content
exhibited high elongation at break (600–800%), but were weak (tensile strength ≤
2 MPa) and underwent irreversible deformations upon extension. A higher DLLA
content made the polymers strong (tensile strength 28–33 MPa), but brittle with
low elongation at break (6–7%).
84
Intermediate co-polymers containing similar molar percentages of both TMC
andDLLAexhibitedgoodelastomericbehavior. For example, a co-polymer
containing equal molar percentages of DLLA and TMC (50%:50% molar ratio)
SO13997_text.indd 60SO13997_text.indd 60 26/01/2011 3:50 PM26/01/2011 3:50 PM