104 M. C. W. Chen and K. C. Cheung
initial cell viability after device construction, the cell viability dropped after 3 days
except in the vicinity of the microﬂuidic channels through which culture medium
was supplied.
Paguirigan and Beebe have used a similar molding process to create gelatin-
based microﬂuidic devices seeded with cells.
69
5.4.3 Droplet Encapsulation
Cells can be encapsulated on-chip within gel spheres with diameters ranging from
tens to hundreds of microns. Generation of monodisperse droplets in microﬂuidic
systems has already been demonstrated, for applications including micromixing,
70
reverse transcriptase PCR, molecular synthesis, and cell encapsulation.
71
Droplets can be generated using two immiscible ﬂows, in which the hydrogel
is the dispersed aqueous phase and a solvent is the continuous phase. In the ﬂow-
focusing design, droplets are generated through shear at the interface between
two parallel streams, where the ﬂows pass through a constriction. The continuous
phase places viscous stress on the immiscible dispersed phase, which is balanced
by the interfacial surface tension. Viscous shear stress tends to extend the interface,
while the competing surface tension effect tends to reduce the interfacial area. In
this situation, droplets are created above a critical stress. The Capillary number
Ca = μv/γ is a dimensionless parameter. It is the ratio of viscous forces to surface
tension, where μ is the viscosity of the oil phase, v is the velocity of the droplet, and
γ is the interfacial tension between the two phases. Droplet size is a function of the
ﬂuid viscosities, surface tension, microﬂuidic channel geometry, and ﬂowrates.
72,73
Droplet size decreases with increasing ﬂow rates, and increases with channel
diameter.
Recent work has demonstrated monodisperse bead and single-cell loading
within aqueous drops using the ﬂow-focusing geometry.
75
A high-aspect-ratio
channel was used to achieve single-particle loading within aqueous drops due to
the hydrodynamic interactions. A high density suspension of particles, in which
the particle diameter is signiﬁcant compared to the channel constriction diameter,
will become self-organized into one of two conﬁgurations when traveling rapidly
through this channel:
(a) particles will be located along one side of the channel, or
(b) particles will alternate from one side of the channel to the other. The ﬂowrates
can be adjusted so that droplets form with the same frequency that particles
arrive at the ﬂow constriction.
The droplet volume ranged from 14–21 pL (droplet diameter from 30–34 μm),
which encapsulated HL60 cells and 9.9 μm-diameter beads, respectively.
The ﬂow-focusing method has been used to generate liquid NiPAAm droplets
at room temperature, which then gelled further downstream in a heated region
of the channel.
76,77
Embedded thin-ﬁlm electrodes were used: as current was
applied through the heater on the bottom of the channel, the local temperature
SO13997_text.indd 112SO13997_text.indd 112 26/01/2011 3:50 PM26/01/2011 3:50 PM 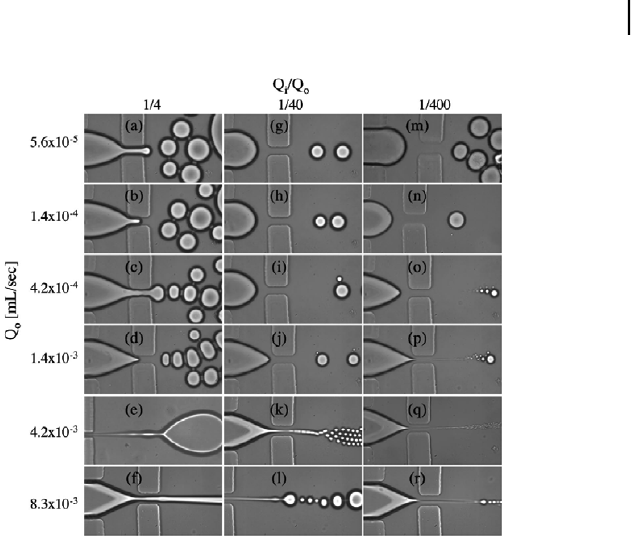 Hydrogel-Based Microﬂuidic Cell Culture 105
Figure 5.13. Droplet formation using the ﬂow focusing design. Droplet size decreases with
increasing oil (continuous phase) ﬂow rate relative to water (dispersed phase) ﬂow rate.
74
in the channel increased above the gel formation temperature to 36
◦
C. The gelled
droplets were then collected in a simple grid to form a packed bed.
Although the majority of droplet-encapsulated cells have used macroscale
extrusion, air-jet or electrostatic methods to generate droplets which gel subse-
quently in a large bath, microﬂuidic hydrogel droplets have also been made.
Alginate gel droplets have been generated using the ﬂow-focusing method.
78,79
Alginate microspheres with encapsulated cells have also been generated using
microﬂuidic devices. Choi et al. used alginate and CaCl
2
ﬂows in hexadecane, and
they reported blocking problems depending on the aqueous phase ﬂowrate, due
to gelation at the interface between alginate and calcium ﬂows.
80
Hexadecane is
highly immiscible with water and has low solubility (9.0 × 10
−8
g/100 g water
at 25
◦
C) in the aqueous phase, allowing high cell viability in beads formed in
hexadecane. However, for speciﬁc ﬂowrates they did report successful on-chip
crosslinking and encapsulation of yeast into alginate beads. Tan and Takeuchi
used insoluble CaCO
3
particles interspersed in aqueous alginate solution, and
droplets were created in corn oil which contained acetic acid.
81
Workman et al.
have also used a ﬂow-focusing geometry in which one phase contains sodium
alginate mixed with CaCO
3
and cells and another phase contains acetic acid in oil.
These two phases are separated by ﬂows of plain oil, so that during laminar ﬂow
the H
+
does not diffuse into the alginate stream. After droplet formation, the H
+
then diffuses inside the alginate droplet to release Ca
2+
, thus permitting gelation
of the droplet. This method has been used to encapsulate the PC12, HEK293, and
SO13997_text.indd 113SO13997_text.indd 113 26/01/2011 3:50 PM26/01/2011 3:50 PM