Application of MEMS in Drug Delivery 159
as the diffusion through the ﬁbrous capsule towards the active sensing surface is
either reduced or absent.
11,57,58
Second, limited capsular vascularity results in poor
drug perfusion, leading to signiﬁcant increases in the delivery time, in the best of
circumstances, and possible accumulation of drug within the local environment
with limited/absent distribution.
59
When tissue represents the implantation site, the surface exposed BioMEMS
material directly interacts with the local biological environment being subject
to sustained attack and degradation by tissue, such as hydrolytic enzymes and
monocyte-induced free radical damage (Fig. 7.6).
13
Aside from affecting BioMEMS
mode of action, there may be local toxicity effects of surface degradation products
that have to be considered.
13
7.3.3 Hemocompatibility and Effect on Biofunctionality
Placement of BioMEMS drug delivery systems in the blood stream leads to adsorp-
tion of proteins on the device surface, particularly ﬁbrinogen and von Willebrand’s
factor, which can lead to adhesion and activation of platelets, the ﬁrst step in the
initiation of thrombus on the surface of any implanted material/device.
60
The coagulation cascade is initiated by platelets deposition, recruitment, and
degranulation at the surface of the biosensor, which is, then, ampliﬁed by leuko-
cyte and erythrocyte deposition. In combination with Factor XII, the initiated
coagulation creates a dense biofouling layer that could signiﬁcantly diminish the
intended device action. Further, surface coagulation occurs even in the presence of
an anticoagulant. In addition, intravascular placement of devices leads to distorted
haemodynamic ﬂow, with local vortex formation. Similar to the intravascular
effect of an anchored thrombus, the intravascular presence of a BioMEMS results
in elevated shear forces and collisions by platelets that aggregate onto the sur-
face. Over time, platelet aggregation leads to thrombus formation and possible
thromboembolism, if the device is maintained in the intravascular environment for
extended periods of time. In spite of all these apparently staggering drawbacks, it
is the ﬁeld of implantable stents for the treatment of cardiovascular disease which
leads the commercialization of MEMS based therapies.
7.4 BIOMEMS DESIGN PARAMETERS AFFECTING
BIOCOMPATIBILITY AND BIOFUNCTIONALITY
7.4.1 Material selection
Traditionally, the substrate used in BioMEMS fabrication has been silicon, how-
ever, presently, the material selection has been signiﬁcantly expanded to include
glass, metals (titanium), and polymers. The alternative material selection in the
fabrication of BioMEMS has been prompted by the poor biocompatibility dis-
played by silicon compared to materials such as titanium, polymethylmethacrylate
SO13997_text.indd 167SO13997_text.indd 167 26/01/2011 3:50 PM26/01/2011 3:50 PM 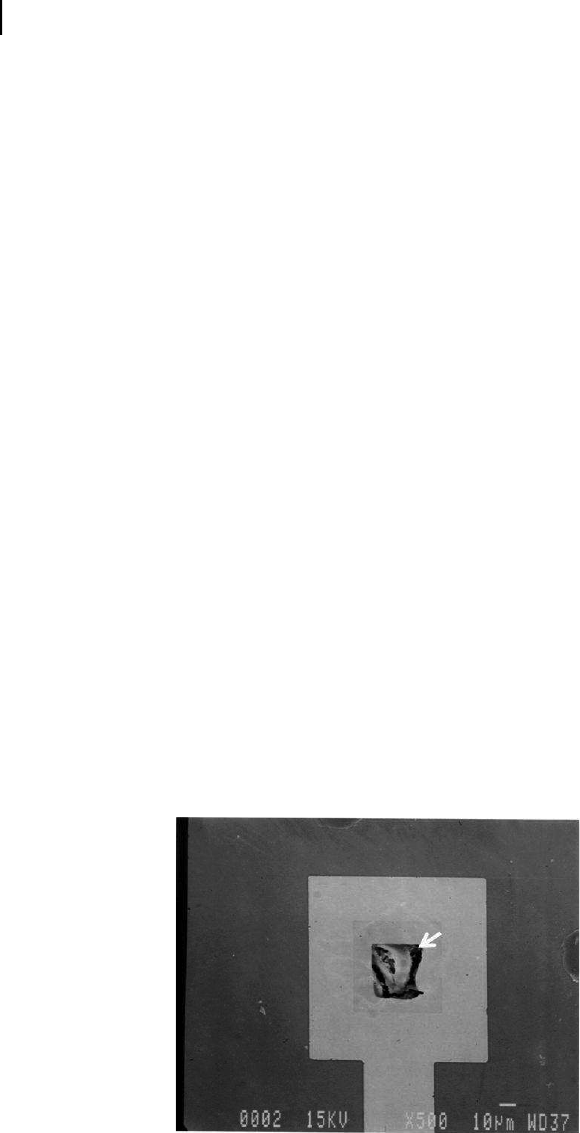 160 G. Voskerician
(PMMA) and polydimethylsiloxane (PDMS), in addition to the silicon’s limited
versatility of mechanical properties.
The question then arises — what is the acceptable level of biocompatibility
which should be displayed by the component materials of a BioMEMS? The simple
answer to such question rests with the critical interactive aspect of each device with
the local biological environment, the contacting surface. It is the device contacting
surface that is responsible for transducing its structural make-up to direct or
inﬂuence the response of proteins, cells,andtheorganismasawhole. Thelocal
biological environment reads the surface structure and responds to it. Certainly,
the task becomes more difﬁcult in the case of devices which release bi-products
locally, leach substances that could affect the local or systemic environment or
expose, as a result of their mechanism of action, a “new” contact surface to an
active inﬂammatory and wound healing site. Speciﬁc to BioMEMS developed
for drug delivery applications, following drug release from reservoirs, “new”
surfaces are exposed to the local environment; indeed, for example, silicon walls
of an empty reservoir, now exposed, represent a “new” surface to the biological
environment, thus, inducing an associated inﬂammatory response(Fig. 7.7).
The comparative analysis on the effect of “new” surface exposure must be
evaluated within the context of the miniaturized device and not normalized to
an irrelevant macroscopic control device of similar surface contact material, yet, of
signiﬁcant size disparity. This approach becomes even more important in circum-
stances where arrays of BioMEMS reservoirs are opened all at once, exposing to
the local biological environment a large “new” contact surface (Fig. 7.8).
56,61
The
newly exposed area will induce a typical staged inﬂammatory response initiated
by protein adsorption and cellular migration and activation, thus, enhancing the
ongoing inﬂammatory response subsequent of the initial injury and placement of
the device in the local biological environment.
Figure 7.7. BioMEMS multi-array prototype. The membrane of a drug sealed reservoir
had undergone dissolution. Following the release of the drug from the reservoir, the inner
surface of the reservoir is now exposed to the local biological environment (top view).
SO13997_text.indd 168SO13997_text.indd 168 26/01/2011 3:50 PM26/01/2011 3:50 PM