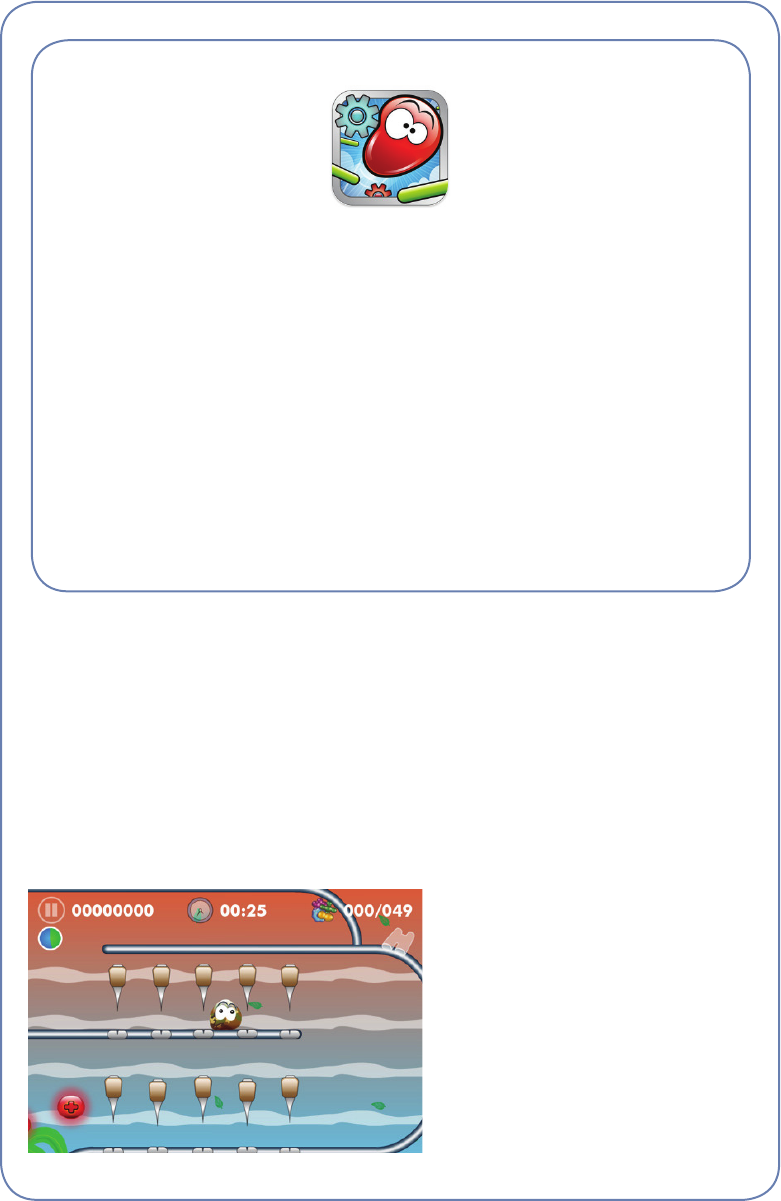 Plaorm: iPhone/iPod Touch (iPad version available separately)
Price: $.99
Developer: Divine Robot
Publisher: Chillingo
Released: July 13, 2011
Blobster
What Is It?
Blobster is an iPhone/iPad-exclusive platformer with a control scheme designed from
the ground up to work well with a touch interface. e game opens with a few short
comic book panels that tell of the evil perpetrated by the “Big and Powerful Corpora-
tion” (not a very subtle reference to BP), which has been polluting the once-serene land
of Blobtopia.
Touching either side of the screen will move Blobster le or right, and players can per-
suade the stretchy fellow to go air-
borne by touching him and pulling
back to create a sort of Angry Birds-
esque slingshot eect.
Levels are colorful, spacious en-
vironments in which your goal is
to collect a dozen or so “blobules”
(they really get their money’s worth
out of this “blob” gag), which are
located at several dierent specic
parts of the level. You’ll have to ing 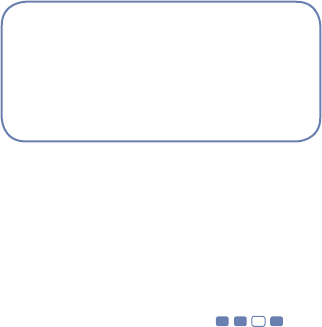 33Blobster
your way past enemies, occasionally collecting upgrades and keys that will allow you ac-
cess to new areas of the environment.
I had a lot of fun with the game’s arcade mode, but it’s also worth playing through just
to unlock survival mode. is is a very fun, endless mode where you’re tasked with trying
to make it as far as you can before falling to your inevitable watery doom.
Blobster is a well-designed platformer in its own right, but what makes it a great iOS
game are all the things it doesn’t dolike not complicating things with tons of on-screen
buons or ham-sting in some sort of three-star performance rating system. It doesn’t
follow the blueprint that many other Chillingo-published games do, so platformer lovers
should give it a chance.
Behind the Game
One morning in February of 2010, Henrik Jönsson woke up with a fully formed idea for a
game. e game idea centered on stretching a piece of goo to ing it across an area. With-
out geing out of bed, Jönsson cracked open his laptop and called his business partner
Nils Andreasson to tell him about the idea.
By the end of March, Jönsson and Nils had a working prototype built around Jöns-
son’s game idea, and they set about gathering feedback from a variety of unlikely
places. “e prototype tested really well with random people in the pub,” says Jönsson.
is was a sign that things were headed in the right direction, as Divine Robot’s last game
hadn’t fared nearly as well in the pub test.
Initially the game was built around inging the piece of goo innitely through a pro-
cedurally-generated environment. Jönsson gured they could nish the app in around six
weeks. His prediction was a lile o target. ree months into the project, Divine Robot
decided to implement an arcade mode with more traditional, linear levels. “As there was
a certain environmental disaster happening that summer, we decided to make the back-
ground story of the game about saving the environmentand poke a bit of fun at those
responsible,” says Jönsson.
By July, Divine Robot had a build of the game that it was
ready to show o to potential consumers. It began beta testing in
August. “e initial feedback showed the levels we had designed
were too hard, and they made a lot of players frustrated,” says
Jönsson. “We went back to the drawing board and put together
another set of 20 levelswhich proved too easy. ird time
round we did beer and by then we had designed well over 100
levels, most of which were discarded.”
In January, Divine Robot brought the game to Chillingo, which agreed to a publishing
deal but recommended another six months of polishing and development. At this point,
the game had gone from an expected six-week development cycle to an eighteen-month
Stascs
• Development me: 18 months
• Total budget: $160,000
• Times downloaded: 200,000