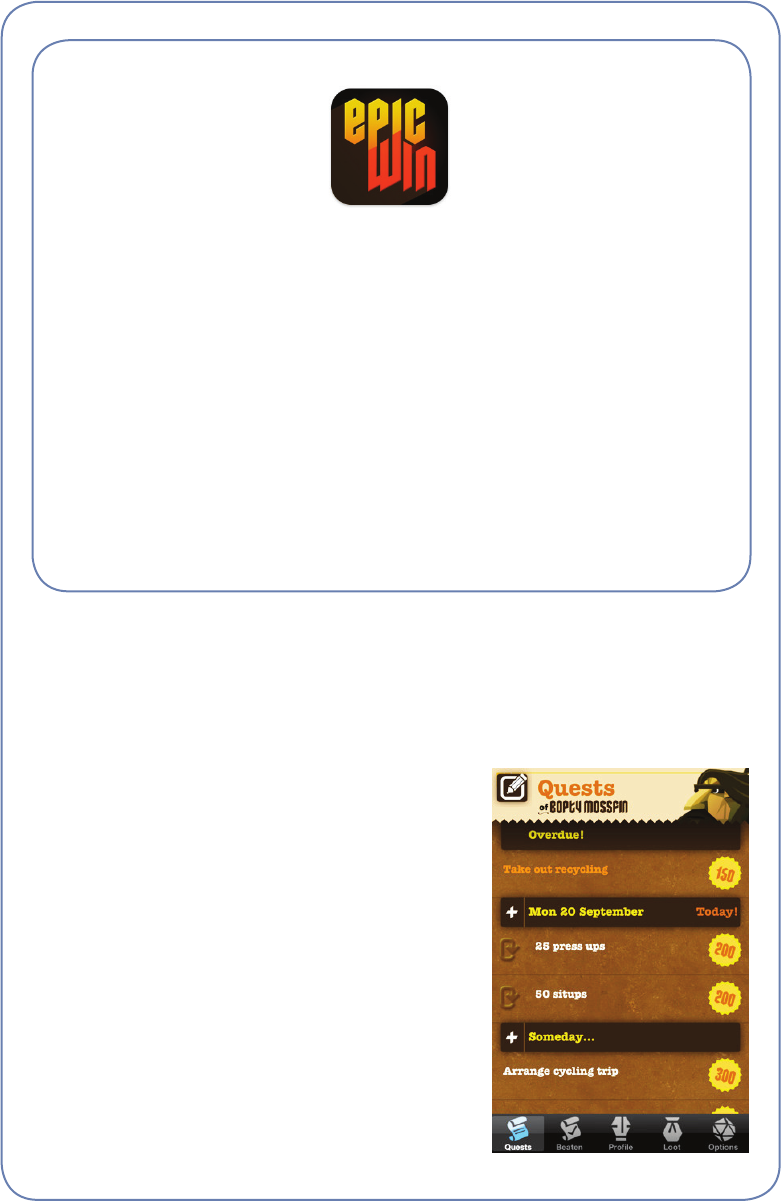 Plaorm: iPhone/iPod Touch
Price: $2.99
Developer: Supermono Limited
Released: August 18, 2010
EpicWin
Where Is It?
There’s always been a problem with task-managing software—if you’re busy enough
to need to have a task manager in the first place, you’re probably also too busy to take
the time to fill out and update some clunky task-
managing app. Busy people have very little incen-
tive to waste their time with such things.
EpicWin is a creative, gaming-based solution to
this problem. It takes task managers to the next level
by turning your life into an RPG in which the quests
are your daily tasks and goals. You set the “quests”
and decide how many experience points each quest is
worth based on the amount of time or eort is need-
ed to complete it. Earning XP will allow you to gain
levels, and you’ll occasionally be “rewarded” with in-
game items (which are usually prey hilariousany-
one else want a “helm of questionable appeal?”).
Let’s say you need to take out the trash. at’s
a small task, with a value of maybe 50 experience 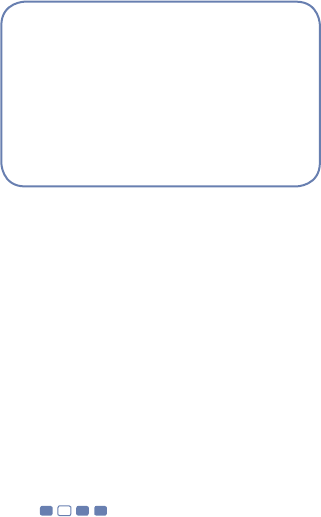 80  EpicWin
points. A class paper or work presentation would be worth more. It’s up to you to decide,
so it is possible to cheat: you could say that ushing crayons down your toilet is worth 300
experience points, but those using EpicWin to help get things done are unlikely to abuse
it in this way.
EpicWin uses incentives that gamers playing RPGs have known about for years: there’s
something intrinsically addictive and even endorphin producing about seeing an XP bar
ll up over time. It’s a manufactured, fake feelingbut it feels good nonetheless. It ex-
ploits the human mind in a way that’s, frankly, prey fun.
Behind the Game
Rex Crowle was a game developer with an obsession, albeit not one related to his own
game. It was around 2004, and Crowle was working at Lionhead Studios on the team
headed by the legendary Peter Molyneux. He and another Lionhead employee (Tak
Fung) had been competing for high scores in an online game called Progress Quest, a “ze-
ro-player RPG” (you’ll learn more about that on p. 103).
Progress Quest is, in a way, a parody of the way that characters in role-playing games
constantly become more powerful as the game progresses. It strips out all of the actual
gameplay and mechanics of those games and reduces it to a text-only simulation. “e
only interaction a player had was to turn it [the game] on and keep it running,” Crowle
explains. “e game played itselflisting, in text form, what was happening in the game
world. ‘You have picked up an amulet of healing.’ ‘You have been bien by a high-school
troll.’ All while the numeric stats above adjusted accordingly.”
Progress Quest ranked every active player in the world, and
score was determined almost entirely by how long the game had
been running on a player’s computer. As a result, serious Progress
Quest players had to keep their PCs running for weeks at a time
in order to maintain their high positions on the game’s global
leaderboard. “A crash or reboot could see you tumbling hun-
dreds of places down the table,” says Crowle.
About ve years later, Crowle was riding a train from London
to the rural farm he grew up on. He says that the familiar ride is one of the only times he
isn’t exposed to an Internet connection, and it gives him time to think. “I’d been thinking
a lot about my productivity and how I could beer stay on top of everything,” he says.
“I’d tried using to-do list soware, but there was never enough incentive to ll out all my
tasks and format them into those dierent contexts and projects.” Crowle says that he has
no trouble with geing things done, but the problem arises when he forgets to document
what he’s done or what he needs to do next. “I started thinking about quests in games
how I love ticking everything o in all the side-quests, and generally making sure I’m
keeping that quest-log pruned,” he says.
Stascs
• Number of experience points I give
myself for remembering to oss: 100
• Number of experience points I give
myself for going a complete day
without bing my nails: 300