223
15
Electricity from
Falling Water
THE ROTARY GENERATOR
Michael Faraday’s discovery of the concept of continuous generation of electric-
ity was the rst crucial step on the way to large-scale availability of electricity.
Converting Faraday’s discovery to a practical working device is credited to several
engineers, among them Zénobe Gramme. The generator is, in essence, as shown
in Figure 15.1. In this simple generator, the conductor moves through the magnetic
eld because we turn it. In other words, we must do  on (or supply 
to) the generator, for which we therefore have the “reverse energy diagram” shown
in Figure 15.2. (Two points to keep in mind regarding these “reverse energy dia-
grams” are, rst, as the name implies, it is “backward” from the energy diagrams
introduced earlier, and, second, both arrows in the diagram have to change direction
from one type of energy diagram to the other.) The entire essence of large-scale
electric energy generation hinges on nding ways to spin the generator reliably and
economically.
THE WATER TURBINE
Turning the generator reliably and, ideally, at low cost requires a source of 
that itself is reliable and inexpensive. One source of cheap, reliable rotary motion
is the waterwheel. In principle,  provided by the waterwheel could be used to
operate a generator, as shown in Figure 15.3. Two changes occur in this . In
the waterwheel, water ows spontaneously from high to low gravitational potential
energy. When this happens, some  becomes available. The waterwheel is
the device used to capture or extract a portion of this energy as useful . The
generator causes a nonspontaneous movement of electrical charge from low to high
electrical potential energy—from low voltage to high voltage. This nonspontaneous
change will happen only if we supply  to the generator. The  being sup-
plied is that provided by the waterwheel.
Waterwheels used in medieval times were not very efcient devices for convert-
ing kinetic energy into , because the water still possesses signicant kinetic
energy even after it leaves the wheel. The quest for more efcient waterwheels
began around the time of the blossoming of the Renaissance. Leonardo da Vinci
recognized that water owing through curved blades bears against those blades
with a force or impulse, illustrated schematically in Figure 15.4. The device that
Leonardo invented was at rst called an “impulse wheel.” Nowadays it is generally 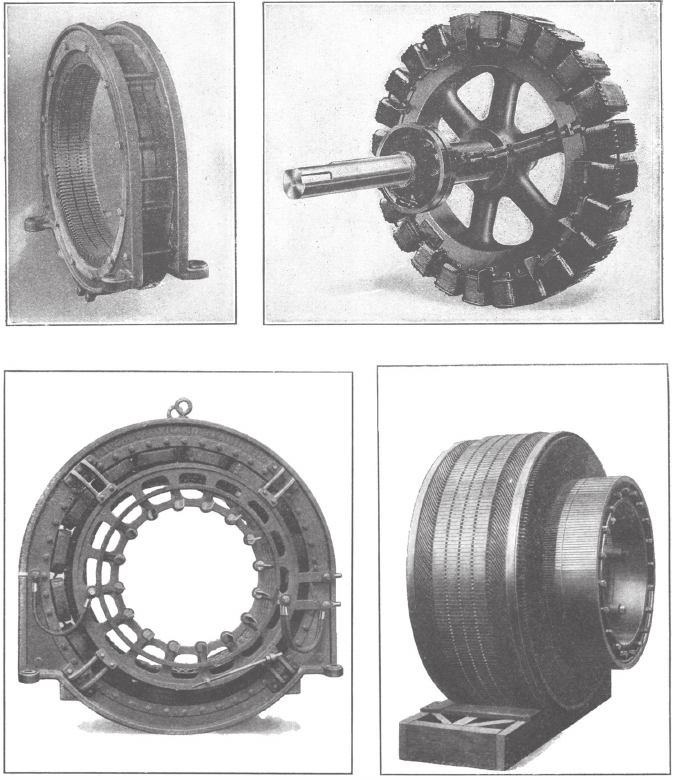 224 Energy and Society
known as a turbine. A turbine is a device that converts the kinetic energy of a
moving uid into rotating kinetic energy. The uid used in the turbine is called the
working uid. For the kinds of turbine discussed in this chapter, the working uid
is water. Later we will meet an extremely important family of turbines in which the
working uid is steam.
In a turbine operated by water, the water ows through pipes or ducts over curved
vanes. To provide the impulse to the vanes, the turbine has to be enclosed in a casing.
The higher the pressure of water supplied to the turbine (essentially, the higher the
(a) (b)
(c)
(d)
FIGURE 15.1 (a) The eld magnet and (b) drum armature of a direct current generator.
(c) Armature and (d) eld magnet of an alternating current generator. 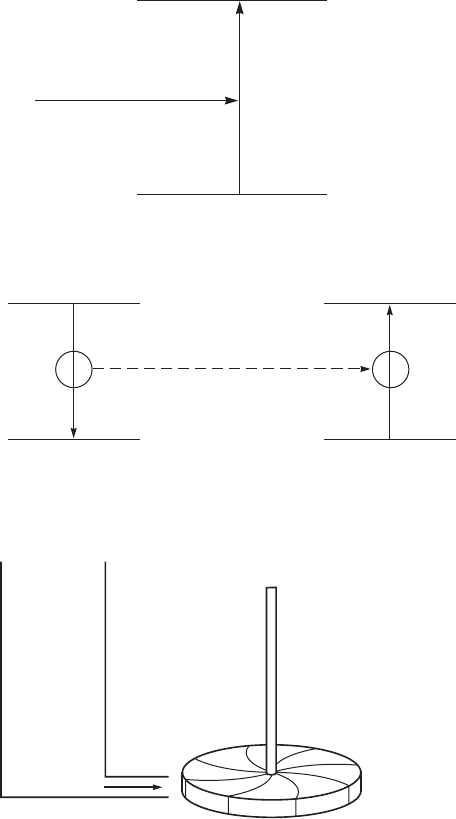 225Electricity from Falling Water
column of water, or its “head”), the faster the turbine will spin. The rotational speed of
a waterwheel is limited by the speed of the stream. This is not so with turbines, where
it is easy to get rotational speeds as high as 30,000 revolutions per minute (rpm).
The development of the turbine during the mid-nineteenth century was a major
engineering advance in providing a source of  for the electrical generator.
The combination of a turbine and a generator can be represented as shown in
High gravitational
potential energy
Low gravitational
potential energy
Generator
Waterwheel
High electrical
potential energy
Low electrical
potential energy
FIGURE 15.3 Hydroelectricity is based on the relationship between gravitational and elec-
trical  as shown in this pair of energy diagrams.
Water
supply
FIGURE 15.4 A basic water-operated turbine relies on a stream of water directed against
the curved blades of the turbine.
High potential
Low potential
Work supplied to system
FIGURE 15.2 The generic reverse energy diagram, which is applicable to all .