Get full access to Engineering Ethics and 60K+ other titles, with free 10-day trial of O'Reilly.

Chapter 5
1986: Challenger Space
Shuttle Explosion
63
THE REPORTED STORY
The New York Times Abstract:
Cape Canaveral, FL, January 28—The space shuttle Challenger exploded in
a ball of fire shortly after it left the launching pad today, and all seven astro-
nauts on board were lost. (Broad, 1986)
THE BACK STORY
THE SPACE SHUTTLE DESIGN
The concept of a completely reusable space shuttle was first discussed
in the 1960s, before the Apollo lunar landing spacecraft had flown. Over
time, to minimize cost, the National Aeronautics and Space Administration
(NASA) compromised on a reusable orbiter, an expendable external fuel
tank carrying liquid propellants for the orbiters’ engines, and two recover-
able solid rocket boosters (Figure 5.1).
To provide for the broadest possible spectrum of civil and military
missions, the shuttle was designed to deliver 65,000 lbs of payload to an
easterly low-Earth orbit or 32,000 lbs to polar orbit. In early 1972, NASA
estimated it would cost $6.2 billion to develop and test this three-part
63
Ch05-P088531.qxd 2/22/06 11:45 AM Page 63 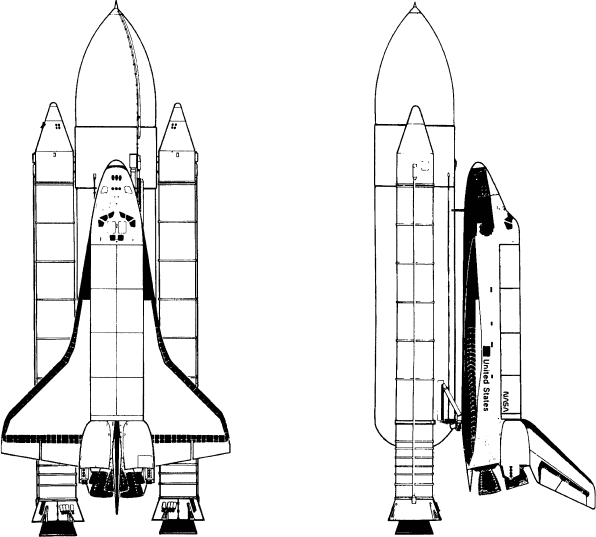 64 Engineering Ethics: An Industrial Perspective
Figure 5.1 Two views of the space shuttle system: the orbiter, the expendable external fuel
tank, and two recoverable solid rocket boosters.
Reprinted from Rogers Commission, 1986.
system. NASA awarded the contract for development of the orbiter and its
main engines to Rockwell International Corporation, the contract for
development of the external tank to Martin Marietta Denver Aerospace,
and the contract for development of the solid rocket boosters to Morton
Thiokol Corporation. Four space shuttle systems were built: the Columbia,
the Discovery, the Atlantis, and the Challenger.
The orbiter is as large as a midsize airline transport and is con-
structed of an aluminum alloy skin stiffened with stringers to form a
shell over frames and bulkheads of aluminum or aluminum alloy. The
major structural sections are the forward fuselage, which encompasses
the pressurized crew compartment; the mid fuselage, which contains the
payload bay; the payload bay doors; the aft fuselage, from which the
main engine nozzles project; and the vertical tail, which splits open
along the trailing edge to provide a speed brake used during entry and
landing. The payload bay is designed to securely hold a wide range of
Ch05-P088531.qxd 2/22/06 11:45 AM Page 64

Get Engineering Ethics now with the O’Reilly learning platform.