Get full access to Illustrated Theatre Production Guide, 2nd Edition and 60K+ other titles, with free 10-day trial of O'Reilly. 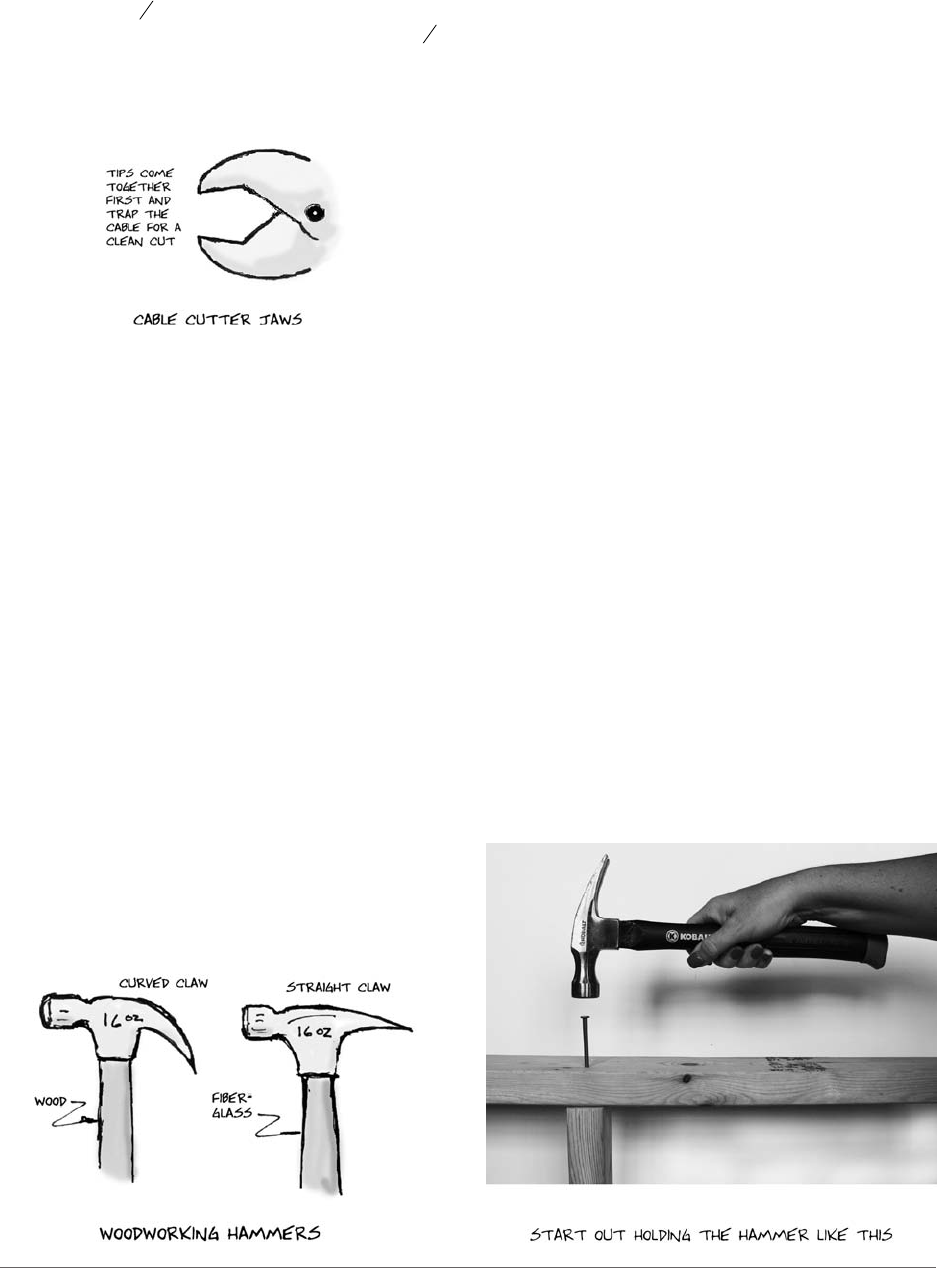 244 Illustrated Theatre Production Guide 2 ed
the cable inward and greatly reduces the amount of
fraying that occurs when making the cut. An ordinary
pair of dikes won’t do that. The 7˝ cutters are big
enough for the
1
8
″ aircraft cable used to hang most
theatre scenery. You will need something larger for
1
4
″
cable used to rig battens.
HAMMERS AND MALLETS
There are two basic categories for hammers: those used
for driving nails and all others. Nail-driving hammers
are of course the most common in a woodworking shop.
Other types include rubber mallets, sledgehammers,
wooden mallets, and ball peen hammers. This second
grouping is used for various tasks like demolition and
metalworking.
The standard nail-driving hammer has a 16-ounce
head, although they are also manufactured in lighter
and heavier weights. There is a curved claw version and
a straight claw type. The claw is the opposite side from
the portion used to pound in nails. The curved claw is
best for removing nails, as it allows the user to rock the
hammer along the claw to gain leverage and more easily
pry out the nail. A straight claw is easier to slip in
between boards and pry them apart. Either one is about
the same when it comes to driving nails.
There is a deﬁnite difference in the quality of
various hammers. The steel used in the head of the
hammer should be hard enough not to wear away or be
deformed by nails. You may have seen cheap hammers
made from very soft steel whose claws have been bent
and twisted from the force of removing nails. On the
other end of the spectrum, if a hammer is made from
steel that is too hard, it may be brittle as a result. Chips
of the hammer head itself can shatter and ﬂy away and
are very dangerous. Some years ago, OSHA came up
with guidelines for manufacturers about grinding
some steel from the striking area of hammers to make
them less likely to chip. You can see that the edges of a
hammer are chamfered at a 45-degree angle.
The handle of a hammer is also important. It
should be sturdy and unlikely to break. Steel handles
are sturdiest, but they transmit a high degree of shock
and vibration to the elbow. Prolonged use may result in
tendonitis. Wooden or ﬁberglass handles are really the
best. When using a hammer, try to keep in mind that
it is intended for driving nails and not for pounding
concrete or steel beams or other such items.
Using a hammer to drive nails takes a moderate
amount of skill gained through practice. Holding the
handle near its end increases the amount of leverage and
hence force that is transmitted to the driving of the nail.
However, the same statement can be applied to the
striking of your thumb if your aim is not very good.
Your thumbs will no doubt appreciate choking up a bit
on the handle until your hand-eye coordination catches
up with your enthusiasm. In this modern age of pneu-
matic nail guns and staplers, hammers have become
somewhat outmoded, but skill with this basic tool is still
important.