Get full access to Learning Red Hat Linux, Second Edition and 60K+ other titles, with free 10-day trial of O'Reilly.

Linux receives data from, sends data to, and stores data on devices. A device generally corresponds to a hardware unit, such as a keyboard or serial port. However, a device may have no hardware counterpart: the kernel creates several pseudodevices that you can access as devices but that have no physical existence. Moreover, a single hardware unit may correspond to several devices. For example, Linux defines each partition of a disk drive as a distinct device. Table 4-1 describes some typical Linux devices; not every system provides all these devices, and some systems provide devices not shown in the table.

Whether you’re using Windows or Linux, you must format a partition before you can store data on it. The installation procedure automatically formats the partitions you create during system installation. When Linux formats a partition, it writes special data, called a filesystem, on the partition. The filesystem organizes the available space and provides a directory that lets you assign a name to each file, which is a set of stored data. A filesystem also enables you to group files into directories, which function much like the folders you create using the Windows Explorer: directories store information about the files they contain.

When you log in to Linux, you’re placed in a special directory known as your home directory. Generally, each user has a distinct home directory, where the user creates personal files. This makes it simple for the user to find files previously created, because they’re kept separate from the files of other users. 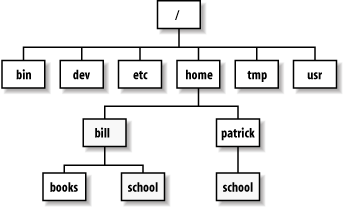 The root user has a special home directory, /root. This directory is commonly called “slash root” to distinguish it from the root directory, /.

Unlike Windows 98, but like other varieties of Unix and Windows NT/2000, Linux is a multiuser operating system. Therefore, it includes mechanisms to protect data from unauthorized access. The primary protection mechanism restricts access to directories and files based on the identity of the user who requests access and on access modes assigned to each directory and file.

The access modes of a directory or file consist of three sets of permissions:

Applies to the owner of the file

Applies to other users

Figure 4-2. Access modes as shown by the ls command

You cannot access a hard drive partition, CD-ROM, or floppy disk until the related device or partition is mounted. Mounting a device checks the status of the device and readies it for access. Linux can be configured to automatically mount a device or partition when it boots or when you launch a desktop environment. By default, GNOME and KDE automatically mount removable media devices such as CD-ROMs and floppy disks.

Before you can remove media from a device, you must unmount it. You can unmount a device by using a desktop environment or issuing a command. For your convenience, the system automatically unmounts devices when it shuts down. A device can be unmounted only if it’s not in use. For example, if a user’s current working directory is a directory of the device, the device cannot be unmounted. See Chapter 7 for more information on mounting and unmounting devices with the mount and umount commands.