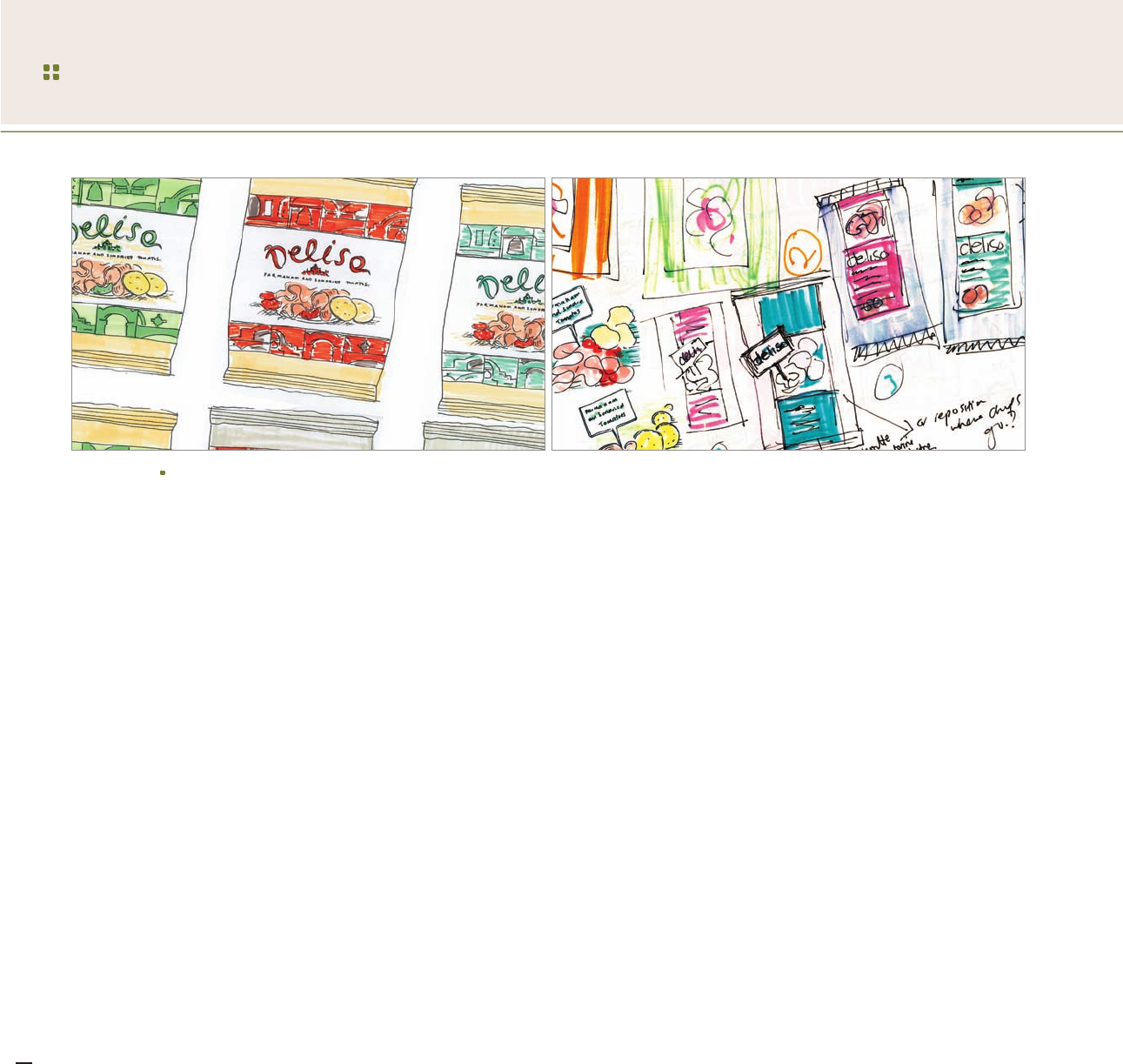 Job: 10-91288 Title: RP: logo Sauuy
11-AC38962 #175 Dtp: 120 Page: 38
034-059_C38962.indd 38034-059_C38962.indd 38 11/20/06 12:56:09 PM11/20/06 12:56:09 PM
Logo Savvy
38
Text
SNACK S TRATEG Y
Bluebird Foods, the market leader of snack foods in New
Zealand, engaged Brave New World (BNW) to name and
package a potato chip brand that would appeal to adventurous
yet discerning snackers—a segment of the snack market that
wasn’t addressed by any other potato chip brand. The name
and, in turn, the packaging had to convey New Zealand’s
de nition of the ultimate snack experience: the deli. Gourmet,
unique, tempting, traditional, quality, and delicious became
the key words as they concentrated on deli-sounding names.
The name they initially researched was Deliso, an evocative
sound that they especially liked because it contained the word
deli. Then an interesting thing happened; people in various
focus groups automatically added an extra I to the third
syllable, turning “Deliso” into “Delisio”—a  uid word that
sounds Italian and even more like “delicious.”
So Delisio it was. To communicate the deli environment with a
slightly European feel, BNW designed a logo that’s expressive,
lively, and energetic. The designers knew a fresh, hand-rendered
typeface would best represent Delisio’s personality, resembling
the chalkboard menus of a real deli. Various versions were
sketched to get the look and feel exactly right, then an
illustrator was appointed to craft each letter of the name.
A color system—blue for sea salt, green for Greek tzatziki,
rich red for sundried tomato and Parma ham, purple for feta
cheese and roasted garlic—was introduced to differentiate
the various chip  avors. The colors give Delisio chips a strong
presence on the supermarket shelf and, at the same time,
add sophistication to the brand that contrasts with the garish
colors of most chip packaging.
The name Delisio, the thoughtful typography, the appetizing
color palette, the beautiful food photography, the engaging
story on the back of each package, and the use of matte foil
packaging work together to put Delisio in an entirely different
category than the shiny foil potato chip brands they compete
with. This is the brand for people who enjoy new experiences
and new tastes that transport them to a different location
every time they open a bag, but it is the sales  gures that have
proved Delisio to be the chip that discerning consumers are
proud to take home to their cupboards.
Brave New World’s designers knew a fresh, hand-rendered typeface would best represent the personality of Delisio’s potato chips.
They sketched various versions to get the look and feel exactly right, then appointed an illustrator to craft each letter of the name.
Delisio
DE SIG N
BRAVE N
CR EATI
V
DEBBIE H
DE SIG NE
ALI IRON
CL IEN T
BLUEBIR
Bl
en
th
s
n
Job: 10-91288 Title: RP: logo Sauuy
11-AC38962 #175 Dtp: 120 Page: 38
034-059_C38962.indd 38034-059_C38962.indd 38 11/20/06 12:56:09 PM11/20/06 12:56:09 PM 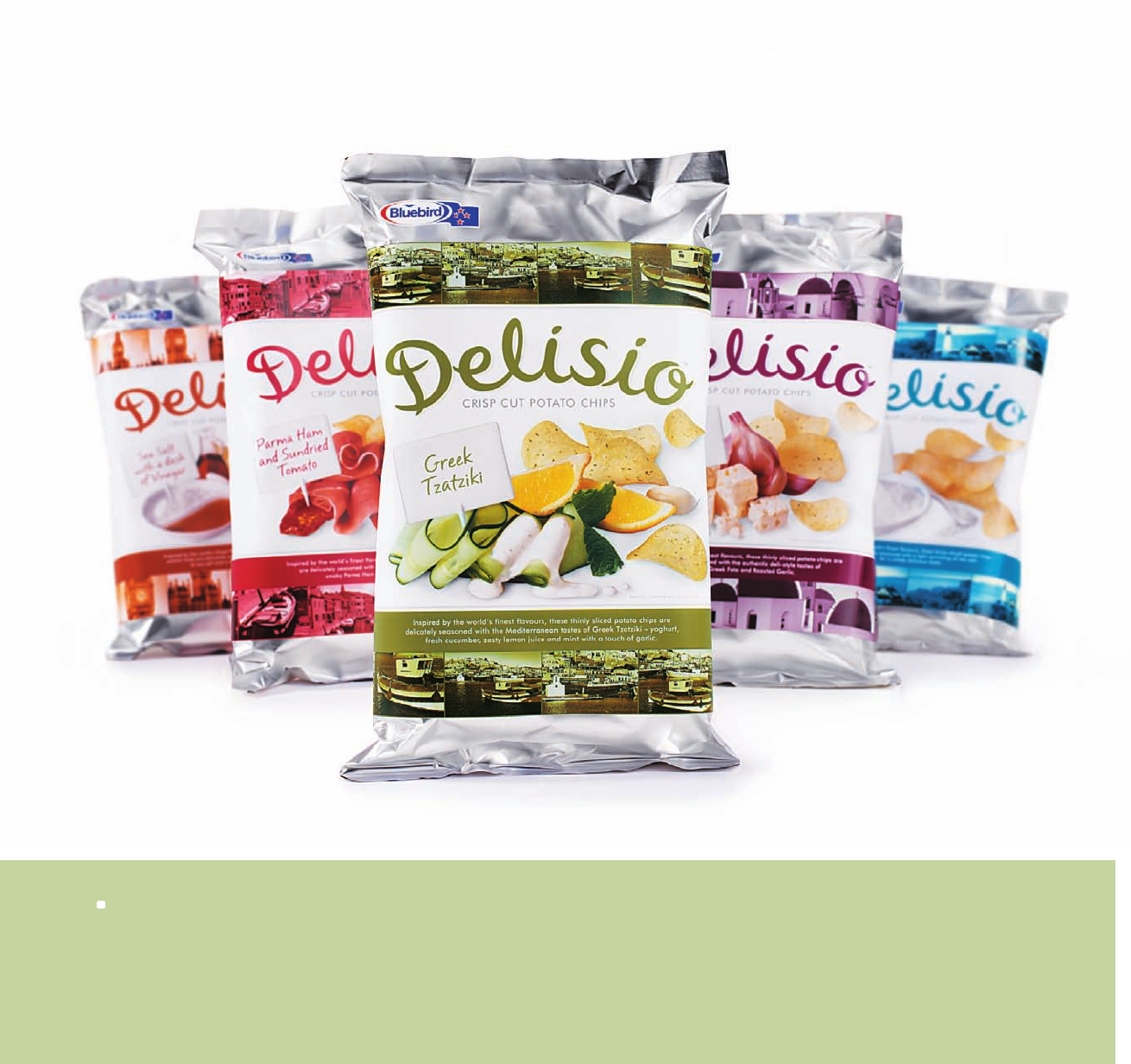