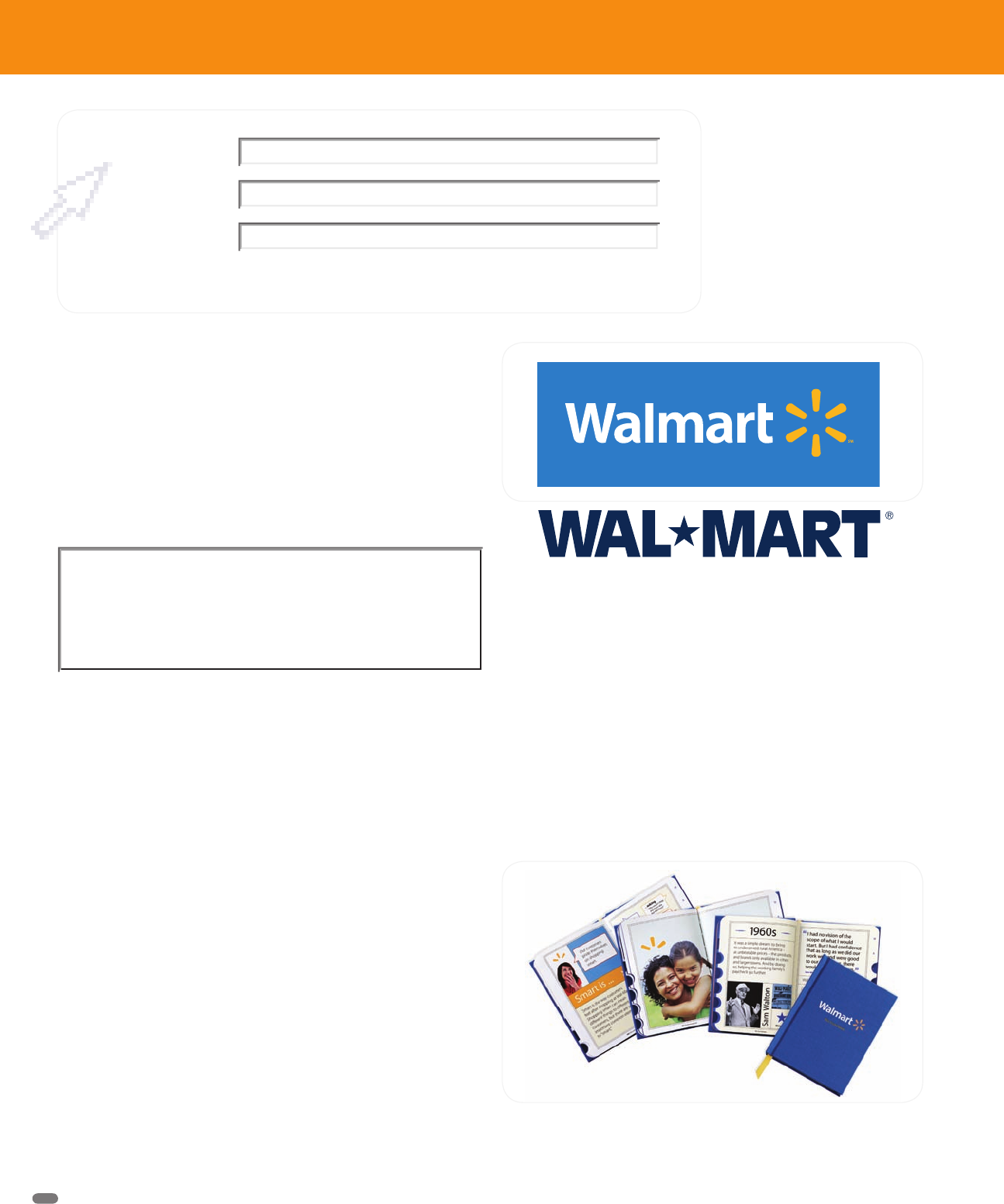 14
LogoLounge 5
Project
Client
Design Firm
When most large companies get a new logo or rebrand, it’s primarily a
matter of interest for their own staff, and secondarily, for their customers.
On the third tier, perhaps, is the design press and the design community.
But usually, it isn’t national or international news.
Word of Walmart’s rebranding sparked an entirely different reaction. Its
new logo—called the “spark”—was an overnight sensation. The Internet,
national news services, newspapers, and magazines covered the new
mark. Everyone, it seemed, was wondering: Where would Wal-Mart—now
Walmart—go next?
As the leading retail chain in the United States, Walmart is bound to make
waves when it makes such a major decision. But the exceptional public
and press reaction had less to do with the news of the redesign than it did
with how it affected people personally. Some were unsure; others were
intrigued. And that’s exactly the connection Walmart hoped to convey
through the new identity: Affect people in a personal, one-on-one way. As
its new motto proclaims, “Saving people money so they can live better.”
“The key aspect of Walmart was stated in its previous motto: ‘Always low
prices. Always.’ Their purpose has always been to save people money.
But now the company wanted to move more toward the beneﬁ t it gave
customers—the emotional beneﬁ t,” says Su Mathews, senior partner with
Lippincott, the design ofﬁ ce who worked with Walmart for nearly two years
to develop the new identity, brand positioning, and the store environment
that supports both.
When the chain was founded in 1962, Walmart was a ﬁ ve-and-dime store
serving rural areas. It offered the least expensive goods. Today, with almost
7,400 stores in the United States and abroad, it has enormous buying clout
and a solid understanding of its current and soon-to-be customers. It offers
everything from car repair, jewelry, and groceries to gasoline, goldﬁ sh, and
electronics. A customer can run in for a pack of gum or an enormous ﬂ at-
screen TV and be relatively certain that the price will be the best around.
If customers save money, and their shopping experience is clean, simple,
and quick, the company reasons, their lives will be made easier. Saving
Top: Walmart’s new identity contains a new word mark—minus
the hyphen—and a new logo, called “the spark.” Lippincott was
the design ofﬁ ce that worked with Walmart for nearly two years to
develop the new identity, brand positioning, and the store environ-
ment that supports both.
Above: Walmart’s old logo was familiar to shoppers, but it did not
have the friendly, customer-service-centered feel that its manage-
ment wanted to communicate. The old star symbol also was not
particularly ownable. In fact, many other retail stores use stars in
their identities.
Now the company wanted to move more
toward the benefit it gave customers
—
the
emotional benefit
Corporate Identity Redesign
Walmart
Lippincott
A limited edition, hardcover brand book explains the history and
evolution of the company, again using the new identity in its design.
TEXT
Black
(Provision RP) Logo Lounge 5
D209-128 / 4275 1st proof1st proof
LL5 008-019_NC_.indd 14 LL5 008-019_NC_.indd 14 2/25/09 9:38:10 PM2/25/09 9:38:10 PM