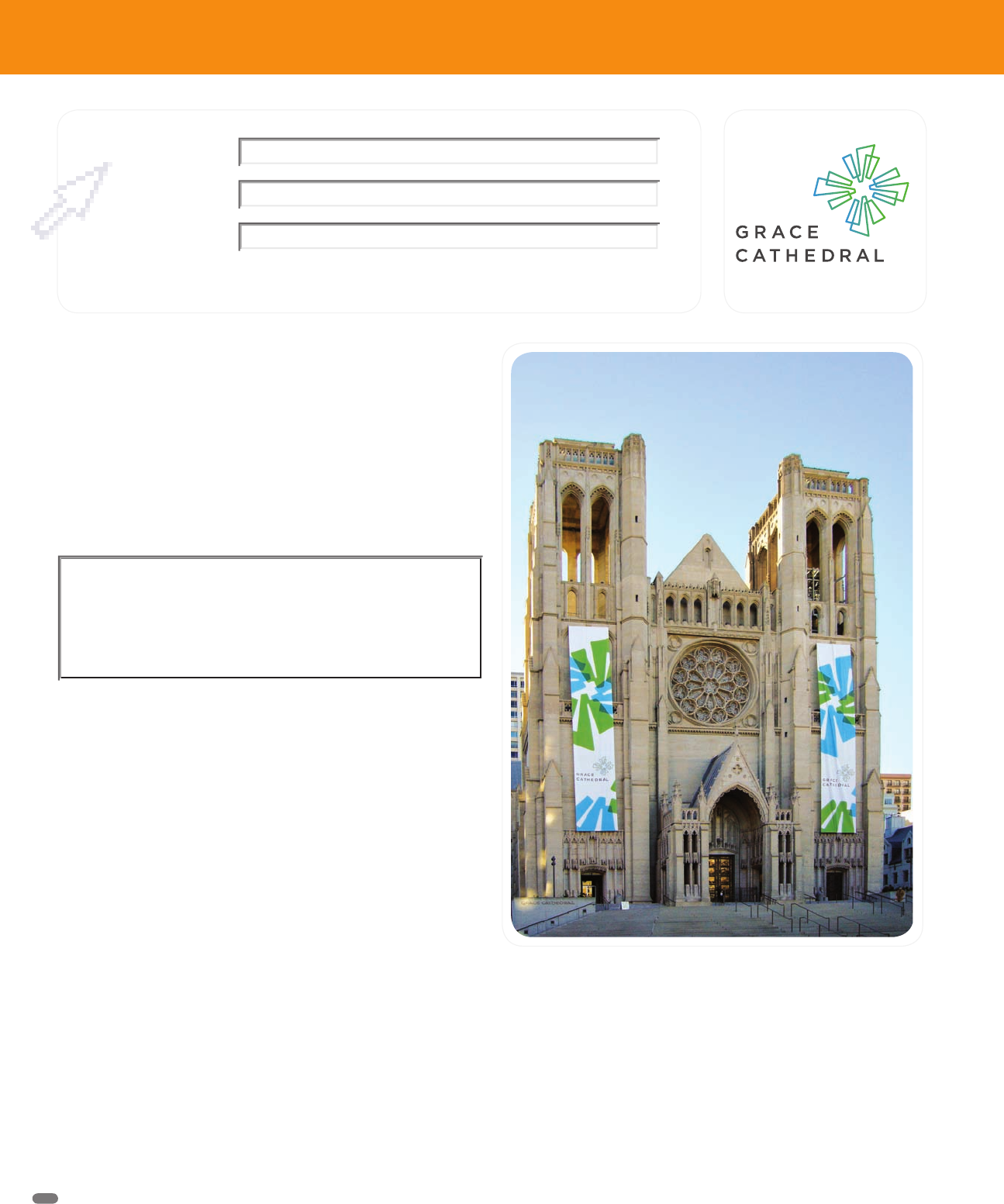 LogoLounge 5
44
What is a church? Is it simply an organization? A building? A shelter or
concept?
These are questions that church organizers wrestle with all of the time.
For the staff of Grace Cathedral, a 100-year-old Gothic cathedral that sits,
solemn and imposing, on San Francisco’s landmark Nob Hill, the answers
were not exactly what they wanted. The building itself is a magniﬁ cent city
icon, but its historic architecture did not exactly present a welcoming face.
In fact, the structure presented just the sort of scowly, stiff, somehow judg-
mental face that many city residents moved to San Francisco to escape.
But behind the cathedral doors, the picture is much different. The church
is progressive and active in the city community. Its staff works hard to
involve all peoples and to create a place of discussion. In short, they want
to change the paradigm of what a church is: not a fortress, but a comfort-
able haven where all are welcome and nurtured.
Still, there’s the issue of the actual architecture—beautiful, but potentially
off-putting. Even the church’s centenarian status carried some stodgy
baggage: How relevant could a 100-year-old church be?
But the celebration of the landmark’s anniversary and the press it would
generate also offered the opportunity for a positive change in direction.
Church organizers decided that a contemporary anniversary logo, one that
could have life after the actual event, might help people better understand
that the organization is a living organism, not a museum.
“It’s not just a castle,” says Ty Mattson of Mattson Creative. He became
involved with the project through the now-defunct ﬁ rm Templin Brink.
Mattson was intrigued with how the identity project bridged faith and cul-
ture. The church did have an existing logo—a modern representation of a
Gothic cathedral—but Mattson describes it as menacing. “It was the kind
of mark that had all of the stigma of a closed-door sort of church. Which
is not what they desired to communicate. They wanted to represent their
open-door policy and how they reach out to the community. The new logo
The new logo and identity that Mattson Creative developed for
Grace Cathedral in San Francisco delivers a progressive, welcom-
ing message that the building’s architecture might not. While the
landmark might be imposing, the church’s organizers wanted
everyone to know that it is a friendly, caring place.
Project
Client
Design Firm
Logo Design
Grace Cathedral, San Francisco
Mattson Creative
The church wanted to represent its open-door
policy and how it reaches out to the community.
TEXT
Black
(Provision RP) Logo Lounge 5
CD309-61 / 4255 2nd proof2nd proof
LL5 044-057_NC_.indd 44 LL5 044-057_NC_.indd 44 3/13/09 7:36:21 AM3/13/09 7:36:21 AM