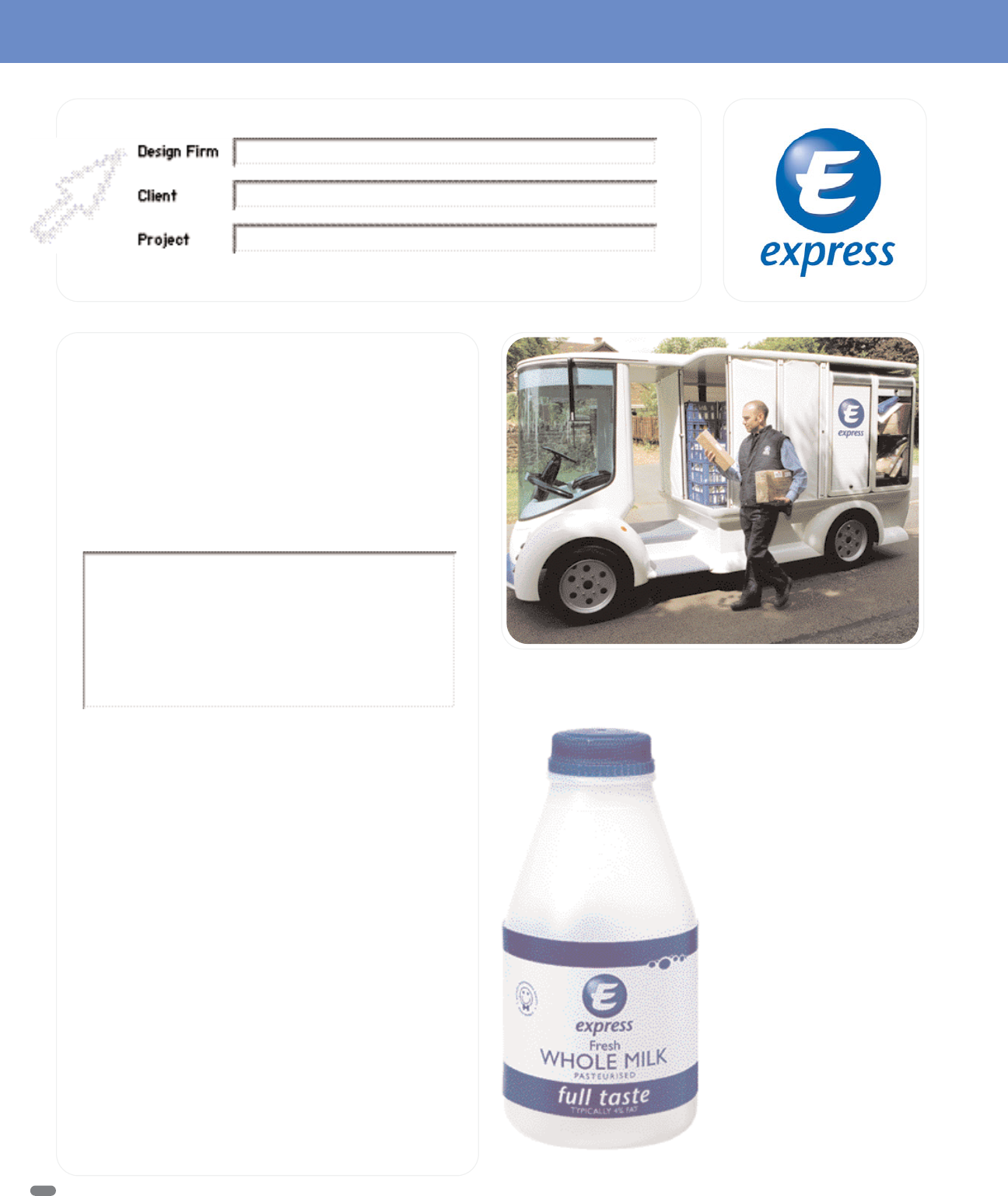 50
U.K.-based Northern Foods PLC originally had four divisions:
Dairy, Convenience, Meat, and Grocery. In the Dairy division were
the six dairy-related companies in its holdings: One sold milk
products to supermarkets; one handled delivery and distribution;
one sold milk at small outlets; another sold dairy products exclu-
sively in Ireland; and yet another sold milk by-products such as
curds and whey to food manufacturers. The sixth company,
Express Dairies, offered doorstep delivery of dairy products
throughout the U.K.
But in 1998, when Northern Foods PLC demerged the Dairy di
vi-
sion into a separate PLC—the largest demerger the food indus-
try had seen to date—the newly independent group was faced
with an identity quandary. Each dairy-related company had had an
excellent reputation under Northern’s umbrella and wanted to pre-
serve it. But the group as a whole needed a new identity under
which to gather, an even stronger brand that uniﬁed all six pieces.
The international design strategy group Minale Tattersfield &
Partners was called in to help, ﬁrst to formulate a brand identity
strategy for the launch of the new company, and two years later,
to modernize the brand for the future.
The first step was to create a unified brand that built on the
strengths historically connected with the Northern brand. For this,
of course, a new name was needed.
Express Dai
ries was established in 1864, so it had plenty of his-
tory. Its daily deliveries, whether done by train or other vehicles,
had been a common sight in the U.K. for over a hundred years.
After much consumer and marketing research, Minale Tattersﬁeld
recommended that Express Dairies be retained as the umbrella
name for the group.
Minale Tattersfield & Partners
Express Dairies
Corporate Identity
“This coming-alive look of the
brand is synonymous with the
company’s future aspirations.”
(Top) Express Dairi es’ new
identity not only brought the
company into the twenty-first
century, i t will also allow the
company to expand its serv-
ice offerings to customers. In
the future, Express plans to
deliver not only dairy pr
oducts
to the home doorstep, but
also packages.
(Middle and Bottom) The
new logo has a double life:
It works as a strong identifier
for dairy-product packaging,
and has also come to repre-
sent the package-delivery
component of Express’s
business. The milk “floats,”
or delivery trucks, have been
repurposed to del
iver both
milk and packages. 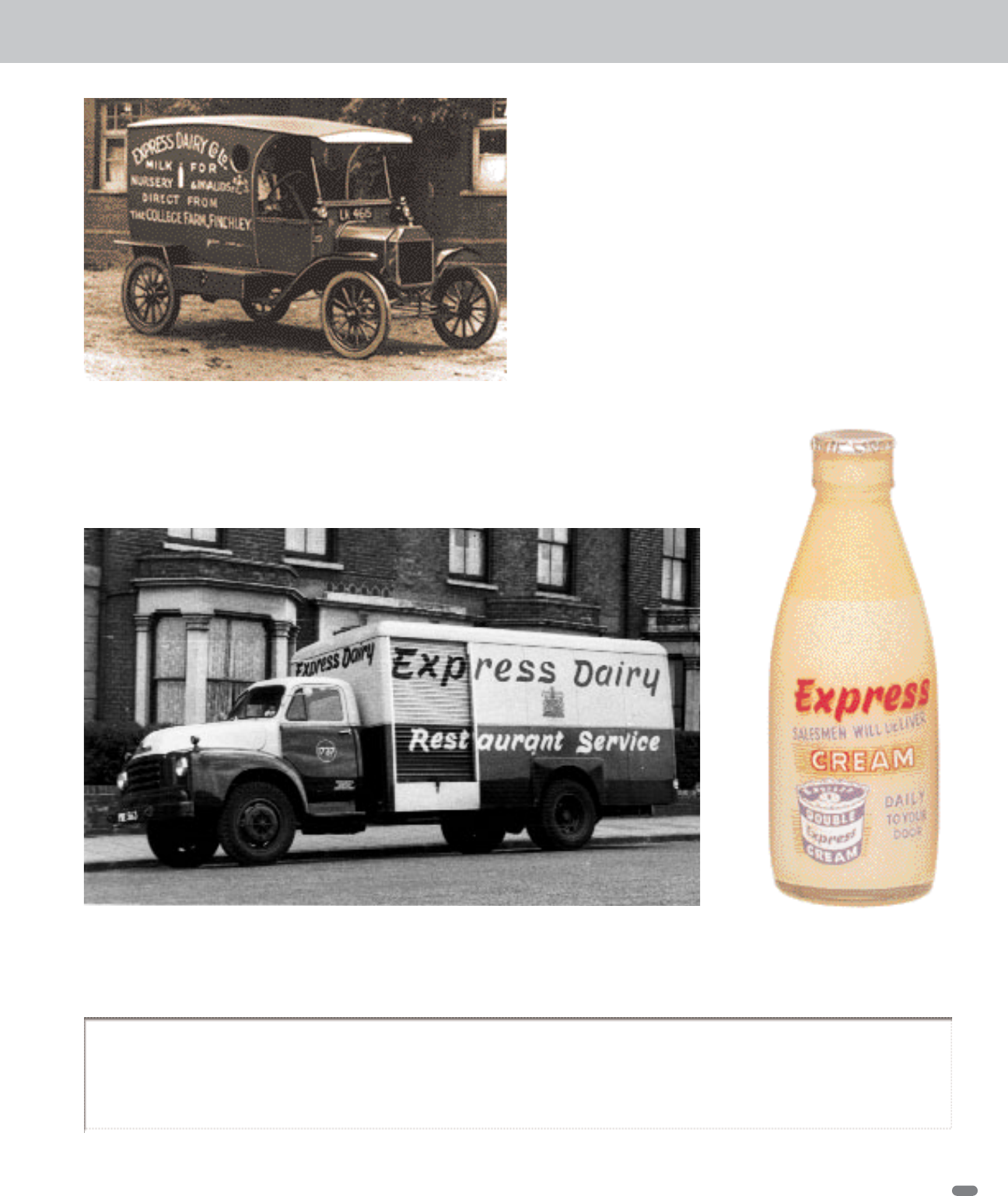 51
This 1950s-era delivery van and bottle of cream reveal the company’s first use of the brush-
stroke E that formed the centerpiece of the new brand graphi cs.
Expr
ess Dairies has been delivering quality products to its
customers for over a hundred years, as this photo from 1882
attests. The company has long held a meaningful position in
consumers’ minds.
“In the end, we changed the shape and the space and pace of the identity and just
called it Express.” 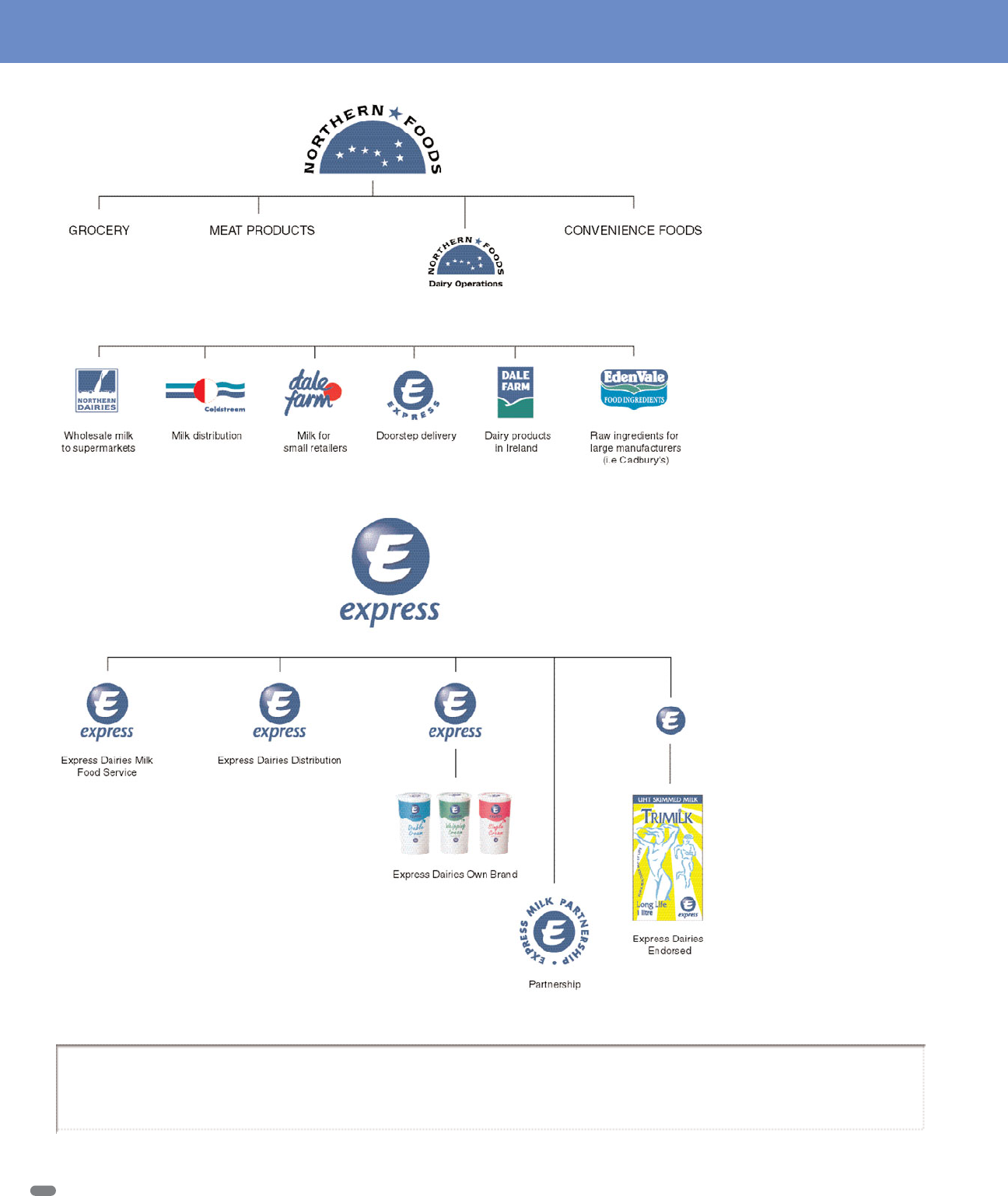 52
“This is not the place for humor. Milk needs to offer total assurance.”
These diagrams show how
N
orthern Foods was struc-
tured before its Dairy division
was demerged (top), and how
the Express Dairies brand was
structured afterward (bottom).