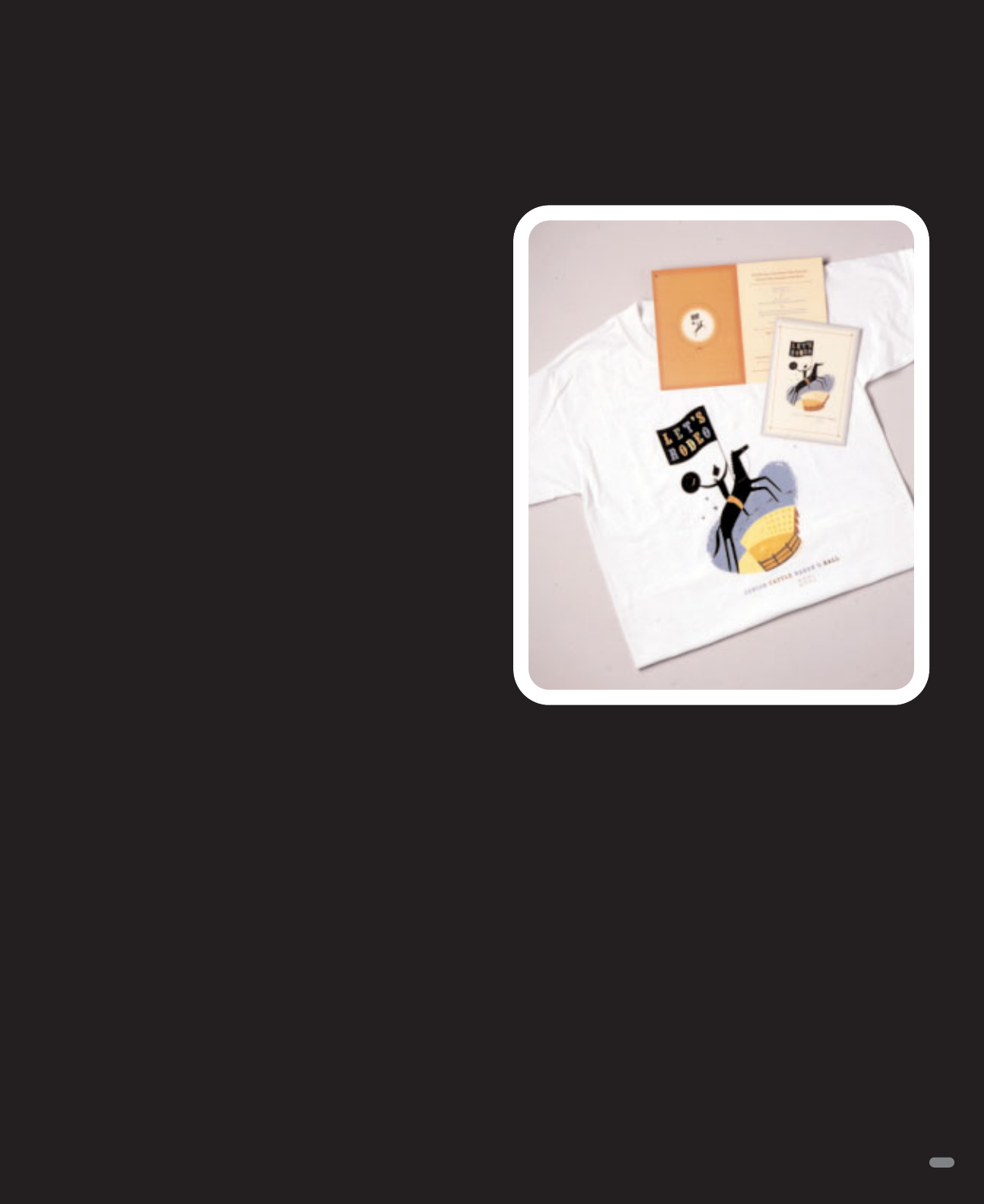 115
The Cattle Baron’s Ball is a much-anticipated annual social event
in Dallas, as is its offspring, the Juni or Cattle Baron’s Ball. First
held in 1974, both benefit the area’s American Cancer Society
chapter. Whereas the Cattle Baron’s Ball is a formal affair for well-
heeled grown-ups, the Junior version is strictly for kids and
includes a rodeo, pony rides, rodeo clowns, trick roping, and more.
Jon Flaming of Jon Flaming Design created the invitations for
both events in 2001. Even though the balls are held annually, the
designer basically had to start from scratch because the previ-
ous year’s des
igns had been all-type treatments.
The work that comes through Flaming’s studio is split between
design and illustration, but even his identities tend to have an
illustrative nature. This project was no exception.
“I wanted [the identity for the junior ball] to be like something
you’ d see in a little kid’s picture book, fun for kids and adults
alike,” Flaming explains. “I’ve always liked the 1940s and ’50s
children’
s book illustrations by Leonard Weisbard and Mel Craw-
ford and wanted to create something with that look and feel. By
doing thi s, I felt I could come up with something that would be
appealing to all ages.”
Even with very corporate work, Flaming says, it is possible to be
looser and please a client with a non-Paul Rand logo. Don’t shut
the door to creativity just because a client asks for something tra-
ditional, he advises. Instead, present a full range of moods,
including some less serious thi ngs, and don’t corner yourself into
just presenting what the client asked for.
“
Corporate clients generally want IDs that speak of tradition and
conservative things. I will present them with things like that, but
also with designs that are outside of the corporate box and are
more illustrative—work that is more clever in its approach,” he
notes. “This will usually be very unexpected for them. But in lots
of meetings where I have done this, I frequently hear people say,
‘You know, I never thought of presenting ourselves in a different
kind of way.’”
Flaming kept the main ball’s identity somewhat conservative,
and the junior event’s ID played off of
it in subtle but fun ways.
The base image is of a rider holding his hat and a flag aloft while
sitting astri de a rearing horse. On the junior ball invitation, the
words “Let’s Rodeo” were added to the flag, as were sugges-
tions of an arena, audience, and blue sky. It has the look of a set-
ting a child would really like to visit, the designer says.
“I like to present images that I like, things that I think would look
really cool,” Flaming says. “Clients may say that they don’
t want
that, but it doesn’
t hurt to explore. By doing that, it may actually
solidify in their heads that this is not the way to go. But then again,
it may turn out to be perfect.”
Junior Cattle Baron’s Ball
Event Identity
Jon Flaming Design, Dallas, TX