Before we get into the how of creating XML editing solutions in Word, let’s look at an example of what it is we’re trying to achieve. This example will reappear throughout the chapter.

Suppose a small Public Relations department wants to create press releases that look good as Word documents but that also can integrate into other systems or that can be published in other formats. Consider also that the people who write such press releases have experience with Word but have no understanding of XML.

By leveraging Word 2003’s custom XML schema functionality (in the Office Professional or standalone versions), the IT department can create an XML template[2] for Word that enables end users in the PR department to not only create new press releases in XML but to edit existing ones too. Imagine that they have already defined an XML schema that includes the basic information that a press release needs to represent. Example 4-1 shows just such a schema.

The XML schema in Example 4-1 declares a title and a body that contains one or more paragraphs. It also contains information about the company making the announcement and the contact person for this press release. Certain fields require their text to conform to a particular format. Specifically, the zip code must be an integer value, the date must conform to the ISO 8601 date format (xsd:date), and each phone number (three in all) must follow a specific format, namely xxx-xxx-xxxx.

Now let’s jump to the completed solution. The IT department delivers a single read-only file named New Press Release.xml to the PR department. To create a new XML press release, PR department employees simply double-click the file and begin filling out the template. To save their new press release, they select File → Save, as usual. Editing an existing press release is just as easy: double-click the existing press release file, make changes, and save changes. All the while, users need not know that the actual format of the files they are creating and editing is XML, let alone that it conforms to a special schema defined by the IT department.

This sounds simple enough, but what is the editing experience like for the user? How easily can they screw things up? Well, the developers in our imaginary IT department are smart and have figured out a way to use a combination of Word’s new XML and document protection features in such a way that users won’t be able to screw things up, at least not without some deliberate effort. In fact, they created the solution with several assumptions in mind:

The last assumption has a catch: while users may not be required to change any settings, they are required to leave the default XML and save settings unchanged. As long as they simply edit documents and save them, all should go well. Figure 4-1 shows what the user sees when first opening the New Press Release.xml file. 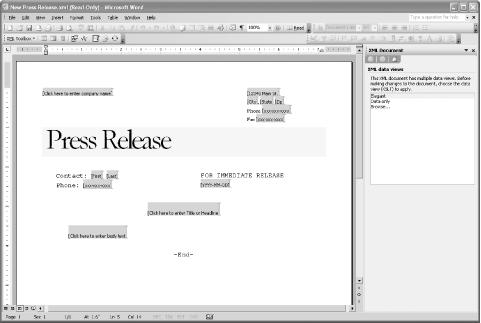 The gray areas in the “press release” template in Figure 4-1 contain placeholder text, such as “Click here to enter company name.” These are familiar constructs in Word templates and are thus familiar to experienced Word users. What is not immediately evident is that these fields correspond to underlying XML elements, a fact which is successfully hidden from the user’s view.

The XML Document task pane shown in Figure 4-1 lists one or more “XML data views” that the user can choose from. In this case, the options are “Elegant,” “Data only,” and “Browse . . . .” Here we only care about the default “Elegant” view, so the user can simply ignore the task pane and begin editing. As soon as they begin editing, the “XML Document” task pane permanently disappears, because it is not possible to choose a different view after changes have been made to the document.

There are several additional things to note about the user’s editing experience:

Figure 4-2 shows the template after being filled out by a user. 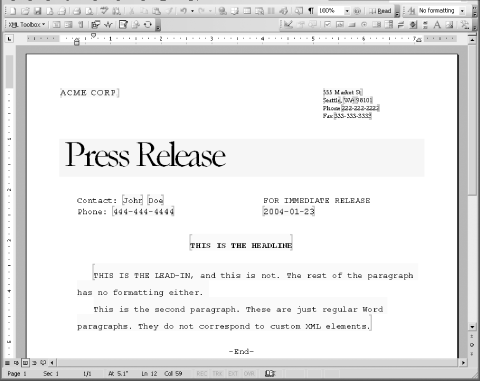 Figure 4-2. The press release template after being filled out by a user

The editable regions shown in Figure 4-2 are bracketed and highlighted yellow; this is the default behavior for when editing restrictions are in force. Also, the squiggly lines are gone, since each value now conforms to its required format.

You can also see in Figure 4-2 that all of the fields in the template are simple text fields—all, that is, except the body of the press release. Here the user can enter multiple paragraphs and can apply some limited formatting. Specifically, there is a character style called “Lead-in Emphasis,” which is turned on by default when the user begins typing the body text. This style is used to delineate the lead-in text for the press release. In Figure 4-2, the lead-in text happens to be “This is the lead-in.” The only formatting effect that the style has is to make the text all-caps. After the user has finished typing the lead-in text, they can turn the all-caps formatting off by selecting the other special character style they have at their disposal: “No formatting.” Figure 4-3 shows the entire style drop-down box that the user sees. Since formatting restrictions are in force, the user only sees the styles they are allowed to apply.

Figure 4-3. The style drop-down box for the press release template

After the user is finished filling out the template and is satisfied with the result, they select File → Save and get the prompt shown in Figure 4-4.

Since the New Press Release.xml file is read-only, the user is prompted to select a new file name. Here is where the user must not interfere with the document’s default settings. In this case, “Apply transform” must remain checked, and “Save data only” must remain unchecked. After entering a filename (MyPressRelease.xml in this case) and clicking “Save,” the user is given one final warning before the XML document is saved, shown in Figure 4-5.

Figure 4-5. Warning the user that WordprocessingML markup may be lost

The purpose of this warning is to alert the user that Word-specific formatting and document features are going to be stripped out of the saved document. Users will have to get used to selecting “Continue,” because this is precisely what we want.

Finally, the MyPressRelease.xml file is saved with the filename and location that the user chose. The content of this file is shown in Example 4-2 (with indentation added).

Example 4-2. The contents of the press release XML file saved by Word, MyPressRelease.xml

To make subsequent changes to this press release, the user would simply double-click the XML file. Word opens the file and displays the view shown in Figure 4-6. This is very similar to the original template view, the only difference being that all of the fields are already filled out. 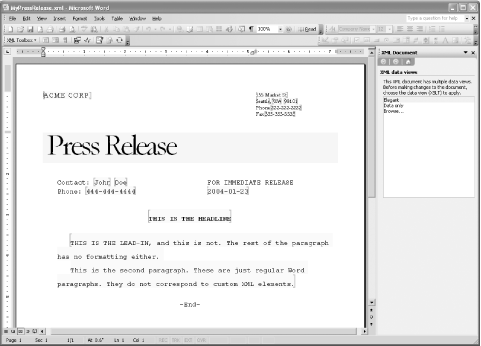 When the user is done editing, they simply select File → Save, and the XML file will be updated according to the changes they made.

The rest of this chapter systematically covers the custom XML schema support in Word 2003 (standalone and Office 2003 Professional versions), while continually making reference back to this example. First, we’ll detail the components of Word’s custom XML schema functionality and how they work. Then, with that knowledge in hand, we’ll go step-by-step through the creation of the press release template, in “Steps to Creating the onload Stylesheet.” Then, in “Deploying the Template,” we’ll look at how the application can be deployed in a corporate environment. Finally, we’ll conclude by addressing some important limitations of Word’s custom XML support.

[2] The word “template” is heavily (and in many ways unavoidably) overloaded in this chapter. It can mean anything from a .dot file to an XSLT instruction, from an XML view in Word to an empty XML “skeleton” document. Most often, we use it to mean the general XML editing application, as in “the press release template.” Of course, context will be your best guide. Just don’t get hung up on thinking it’s a technical term; it’s not.

Get Office 2003 XML now with the O’Reilly learning platform.