Quantitative Finance for Physicists by Anatoly B. Schmidt

Get full access to Quantitative Finance for Physicists and 60K+ other titles, with free 10-day trial of O'Reilly.

Start your free trial
Comments
CHAPTER 1
1. The author calls this part academic primarily because he has difficulty
answering the question ‘‘So, how can we make some money with this
stuff?’’ Undoubtedly, ‘‘money-making’ ’ mathematical finance has deep
academic roots.
2. Lots of information on the subject can also be found on the websites
http://www.econophysics.org and http://www.unifr.ch/econophysics.
3. Still, Section 7.1 is a useful precursor for Chapter 12.
4. It should be noted that scientific software packages such as Matlab and
S-Plus (let alone ‘‘in-house’’ software developed with C/Cþþ) are often
used for sophisticated financial data analysis. But Excel, having a wide
array of built-in functions and programming capabilities with Visual
Basic for Applications (VBA) [13], is ubiquitously employed in the finan-
cial industry.
CHAPTER 2
1. In financial literature, return is sometimes defined as [P(t)  P(t1)] while
the variable R(t) in (2.2.1) is named rate of return.
2. For the formal definition of IID, see Section 5.1.
3. USD/JPY denotes the price of one USD in units of JPY, etc.
4. Technical analysis is based on the seeking and interpretation of patterns
in past prices [7]. Fundamental analysis is evaluation the company’s
145

business quality based on its growth expectations, cash flow, and so
on [8].
5. Arbitrage trading stra tegies are discussed in Section 10.4.
6. An instructive discussion on EMH and rational bubbles is given also on
L. Tesfatsion’s website: http://www.econ.iastate.edu/classes/econ308/tes-
fatsion/emarketh.htm.
CHAPTER 4
1. In the physical literature, the diffusion coefficient is often defined as
D ¼ kT=(6pZR). Then E[r
2
]  r
0
2
¼ 6Dt.
2. The general case of the random walk is discussed in Section 5.1.
3. Here we simplify the notations: m(t) ¼ m, s(y(t), t) ¼ s .
4. The notation y ¼ O(x) means that y and x are of the same asymptotic
order, that is, 0 < lim
t!0
[y(t)=x(t)] < 1.
CHAPTER 5
1. See http://econ.la.psu.edu/ hbierens/EASYREG.HTM.
CHAPTER 7
1. Ironically, market s may react unexpectedly even at ‘‘expected’’ news.
Consider a Federal Reserve interest rate cut, which is an economic
stimulus. One may expect market rally after its announcement. However,
prices might have already grown in anticipation of this event. Then
investors may start immediate profit taking, which leads to falling prices.
2. In the case with g < 0, the system has an energy source and the trajectory
is an unbounded outward spiral.
CHAPTER 8
1. See, for example, [1] and references therein. Note that the GARCH
models generally assume that the unconditional innovations are
normal.
2. While several important findings have been reported after publishing
[2], I think this conclusion still holds. On a philosophical note, statistical
data analysis in general is hardly capable of attaining perfection of
mathematical proof. Therefore, scholars with the ‘‘hard-science’’
146 Comments 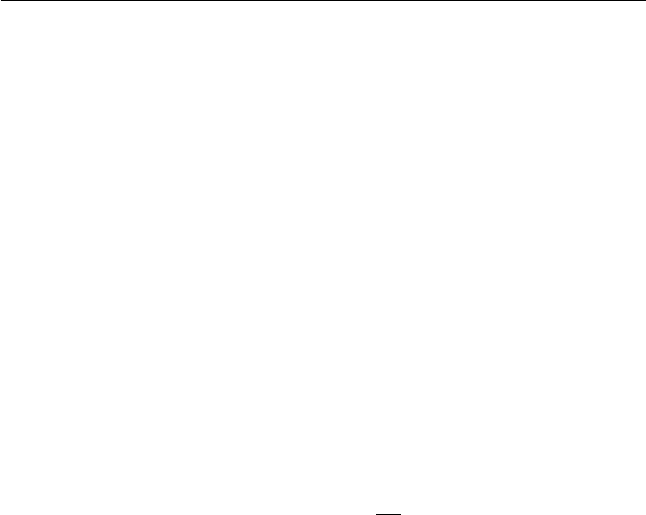 background may often be dissatisfied wi th rigorousness of empirical
research.
3. There has been some interesting research on the distribution of the
company sizes [3, 4].
4. The foreign exchange data available to academic research are overwhelm-
ingly bank quotes (indicative rates) rather than the real inter-bank trans-
action rates (so-called firm rates) [5].
CHAPTER 9
1. In financial literature, derivatives are also called contingent claims.
2. The names of the American and European options refer to the exercising
rule and are not related to geography. Several other types of options with
complicated payoff rules (so-called exoti c options) have been introduced
in recent years [13].
3. The U.S. Treasury bills are often used as a benchmark for the risk-free
asset.
4. Here and further, the transaction fees are neglected.
5. We might choose also one share and 
@F
@S

1
options.
CHAPTER 10
1. See Chapter 11.
2. Qualitative graphical presentation of the efficient frontier and the capital
market line is similar to the trade-off curve and the trade-off straight line,
respectively, depicted in Figure 10.1.
3. Usually, Standard and Poor’s 500 Index is used a s proxy for the U.S.
market portfolio.
4. ROE ¼ E/B where E is earnings; B is the book value that in a nutshell
equals the company’s assets minus its debt.
CHAPTER 11
1. In risk management, the self-explanatory notion of P/L is used rather
than return.
2. In the current literature, the following synonyms of ETL are sometimes
used: expected shortfall and conditional VaR [2].
3. EWMA or GARCH are usually used for the historical volatility forecasts
(see Section 4.3).
Comments 147

Get Quantitative Finance for Physicists now with the O’Reilly learning platform.