Ruby on Rails® for Microsoft Developers by Antonio Cangiano

Get full access to Ruby on Rails® for Microsoft Developers and 60K+ other titles, with free 10-day trial of O'Reilly.

If you were to create a new ASP.NET application, you would typically reach for Visual Studio or its free counterpart Visual Web Developer 2008 Express Edition, in order to produce a new ASP.NET website. The solution and project generated would essentially be an almost empty container for the items that you'd add as you developed the application.

With Rails you reach for the command line and invoke the rails command, unless you are using one of the available IDEs that does that behind the scenes for you. Unlike Visual Studio, this command generates several folders and files that act as the skeleton of your application.

In Rails there is a lot of magic going on. This improves productivity but can also be intimidating to newcomers. When doing Rails development, always keep a tab open on the official API documentation (http://api.rubyonrails.org) or equivalent sites such as http://apidock.com/rails.

You can use the rails command to create your blog application:

This creates a blog directory in the current one (C:\projects in this case) and also prints a list of directories and files that are generated, as shown in Figure 5-1. 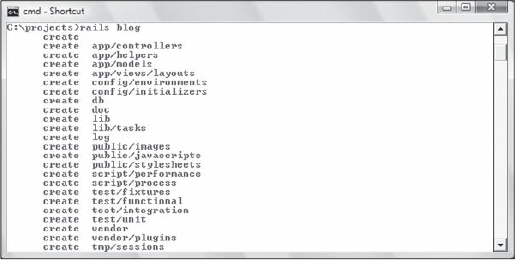 You use cd to step into the blog directory that was just generated by the rails command:

The directory structure is shown ...

Get Ruby on Rails® for Microsoft Developers now with the O’Reilly learning platform.