Get full access to The Complete Graphic Designer and 60K+ other titles, with free 10-day trial of O'Reilly. 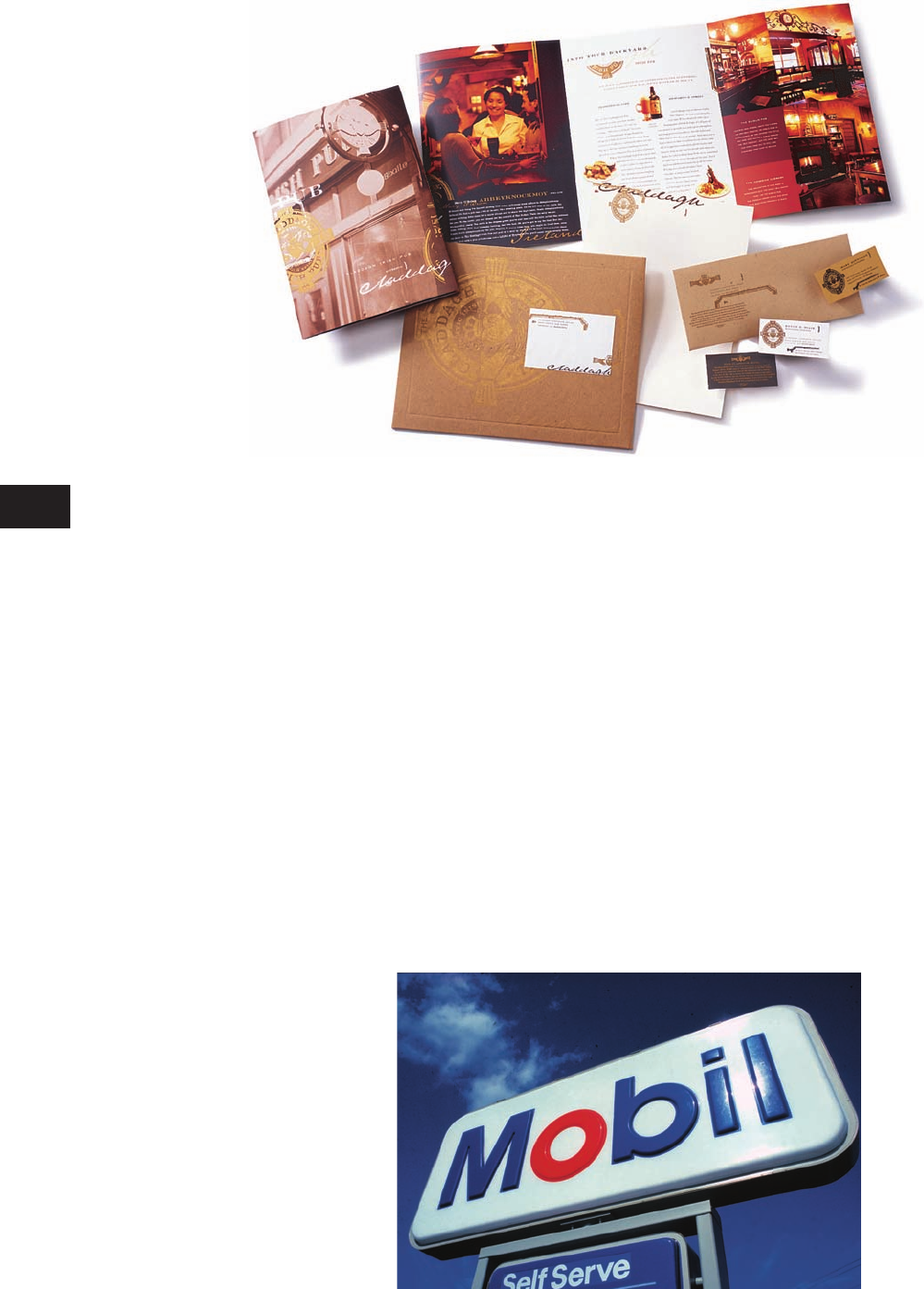 The Complete Graphic Designer
114
In recent years, “corporate identi-
ty” has been used interchangeably
with the term “branding,” par-
ticularly by overzealous market-
ing consultants, public relations
specialists, and even some creative
agencies. The core difference is
that an identity is a visual system
used to identify a company’s goals,
values, and personality, while a
brand is the impression the mar-
ket has about a company.
Consistency and
Corporate Identity
When undertaking a new corporate
identity project, it is imperative for
An Identity Is
Not a Brand
The Mobil corporate identity program was devel-
oped by Chermayeff and Geismar in 1966 with
continued consultation and design over thirty-ﬁ ve
years. By developing a consistent identity that is
incorporated into the design of the company’s
products, services, and even store architecture,
the simple yet unique Mobil logo is now ingrained
into the American consumer’s psyche as a repre-
sentation of a leading petroleum company.
Design:
Chermayeff & Geismar Studio
the designer to maintain consis-
tency. Consistency plays a vital
role in how a business or organiza-
tion is perceived by its customers.
While ultimately the quality of the
products and services of an orga-
nization will determine its success,
the corporate identity should be
a direct reﬂ ection of those quali-
ties. If an identity varies greatly
from application to application, or
selectively appears on marketing
collateral, a mixed message is being
communicated. This inconsistency
can make the audience question the
legitimacy of the business.
Where most identities falter in
consistency is when transitioning
TB
Provision-Complete Graphic Designer
CD109-59/4028
1st
proof
CGD p112-143_Text file_.indd 114CGD p112-143_Text file_.indd 114 1/20/09 12:31:14 PM1/20/09 12:31:14 PM 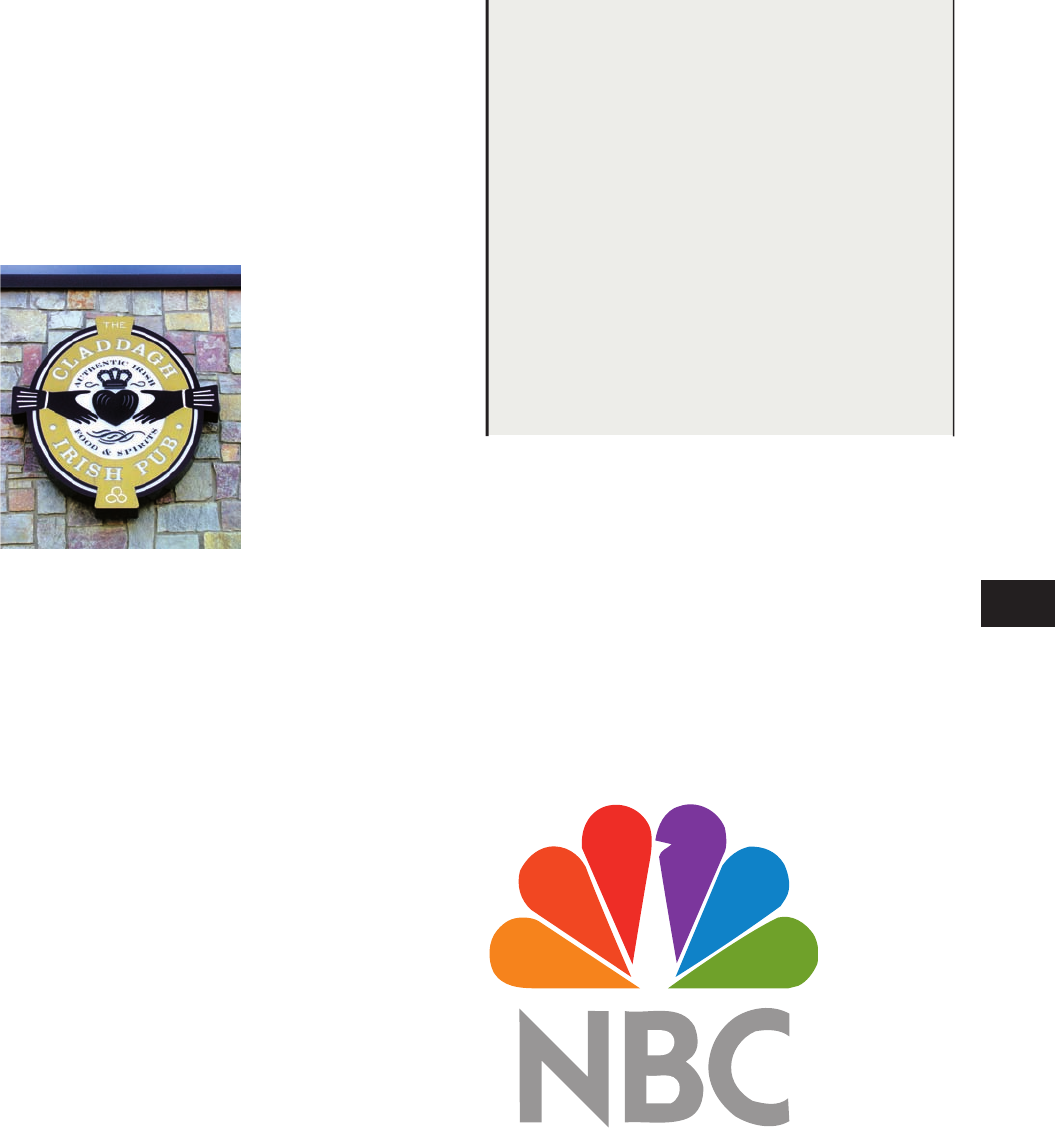 Corporate Identity
115
An identity system incorporates all the visual
elements with which a customer or client comes
into contact. For this Irish restaurant, the identity
has been applied to menus, glasses, brochures,
and stationery.
Design: Lodge Design
Successful Identity Qualities
In order to be effective, successful corporate identity
programs must consist of the following qualities in all
internal and external communications:
• Distinction through unique logos
and graphics
• Clarity of message by using consistent graphic
elements
• Solidarity, longevity, and memorability
The multicolored peacock has
represented NBC (National Broad-
casting Company) since 1956, but
wasn’t adopted as the ofﬁ cial iden-
tity until 1985. Since then, it has
consistently been shown on-screen
during television broadcasts and
commercial breaks, representing
quality entertainment and news.
Design:
Chermayeff & Geismar Studio
from an older, more established identity to a new one.
Instead of using similar color schemes, typefaces, or
graphic elements, some organizations try to change
their look abruptly, completely disregarding any equity
that may have existed in the old identity. This leads to a
tumultuous transition and confusion on the part of the
customer. Instead of haphazard implementation, a new
identity should evolve gradually over time to communi-
cate clarity, solidarity, and distinction.
Corporate identities should be designed for longev-
ity and a minimum life span of ﬁ ve-to-ten years. The
most successful identities have remained relatively
unchanged for decades, such as ABC (American
Broadcasting Company), Westinghouse, United
Airlines, and AT&T. Some identities, like AEG (Allge-
meine Elektricitats Gesellschaft), London Under-
ground, and GE (General Electric) have been around
for more than 100 years.
TB
Provision-Complete Graphic Designer
CD109-59/4028
1st
proof
CGD p112-143_Text file_.indd 115CGD p112-143_Text file_.indd 115 1/20/09 12:31:16 PM1/20/09 12:31:16 PM

Get The Complete Graphic Designer now with the O’Reilly learning platform.