151
If the Universe Is Expanding...
Please do!
Have you all done a
ﬂame reaction test in
chemistry class?
Hmm, did I do
that?
This is the phenomenon that occurs when a
substance is placed in a ﬂame and the color
varies according to the chemical elements
that are contained in the substance.
Does the spectrum differ much depending on the star?
Salt is yellow since it contains sodium,
and copper is blue-green.
Salt is
yeow
Coer is
blue-grn
That’s right. The chemical elements emit or absorb light with speciﬁc
wavelengths according to their structures. Therefore, if you use a prism
to separate the light emitted by a heavenly body according to wavelengths,
the prism creates a rainbow that you can analyze to ﬁnd out the substances
that are contained in that heavenly body.
Let me explain
this in a little
more detail.
Yes and no. Since most stars are composed of very similar substances,* one
would assume that they would emit spectra that are also very similar. Stars
are mainly composed of hydrogen and helium plus smaller amounts of a
few heavier elements. However, different stars actually emit very different
spectra, and that is because different stars vary in temperature.
* The chemical composition of stars in terms of mass ratio is predominantly hydrogen:helium = 3:1
with a very small percentage of other heavier elements, usually less than 2%. This ratio barely differs
from star to star.

152 Chapter 3 The Universe Was Born With a Big Bang
Well, then Slipher, who gave the data to Hubble, seems to be the person
who noticed that the universe is expanding—not Hubble, right?
But Slipher isn't very famous in the United States.
He believed that the redshift meant that many galaxies were receding
from us, but he thought it was due to the basic motion of heavenly
bodies. Hubble, however, conducted a thorough investigation of the
correlation between distance and redshift. He discovered that the
farther away a galaxy is, the faster it is receding—a fact that sup-
ports the theory of an expanding universe.
You'll understand it if we write three
letters on a balloon and then inﬂate it.
If they were receding, table salt would become more
orange, and copper would become yellowish green.
But why does that mean the
universe itself is expanding?
Very hot stars emit spectra that have prominent lines for helium and the
ionized heavy elements (that is, atoms that have gained or lost an electron
or electrons). On the other hand, very cool stars emit spectra with no visible
helium lines but with lines for neutral atoms and molecules. Nevertheless,
if temperature differences cause differences in spectra, then similar stars
(that is, stars with similar mass and temperature) should have practically
identical spectra. However, Slipher (see page 146) discovered that a shift
toward red occurred in the wavelengths. 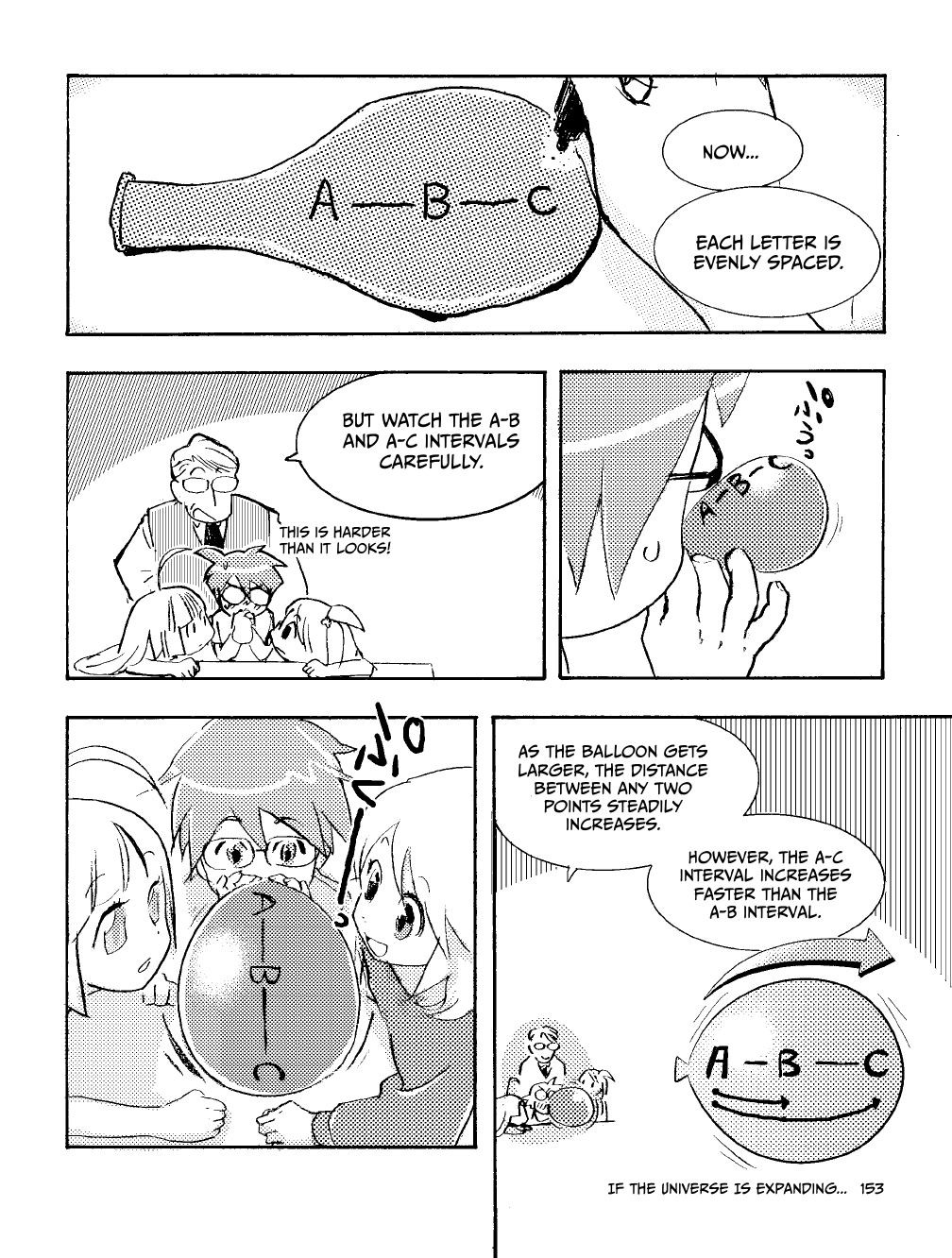 If the Universe Is Expanding... 153
Now...
Each leer is
eve n ly s pa ce d.
But watch the A-B
and A-C intervals
ca r e f u y.
As the ban gets
larger, the distance
betwn any two
points steadily
increases.
However, the A-C
interval increases
faster than the
A-B interval.
This is harder
than it lks! 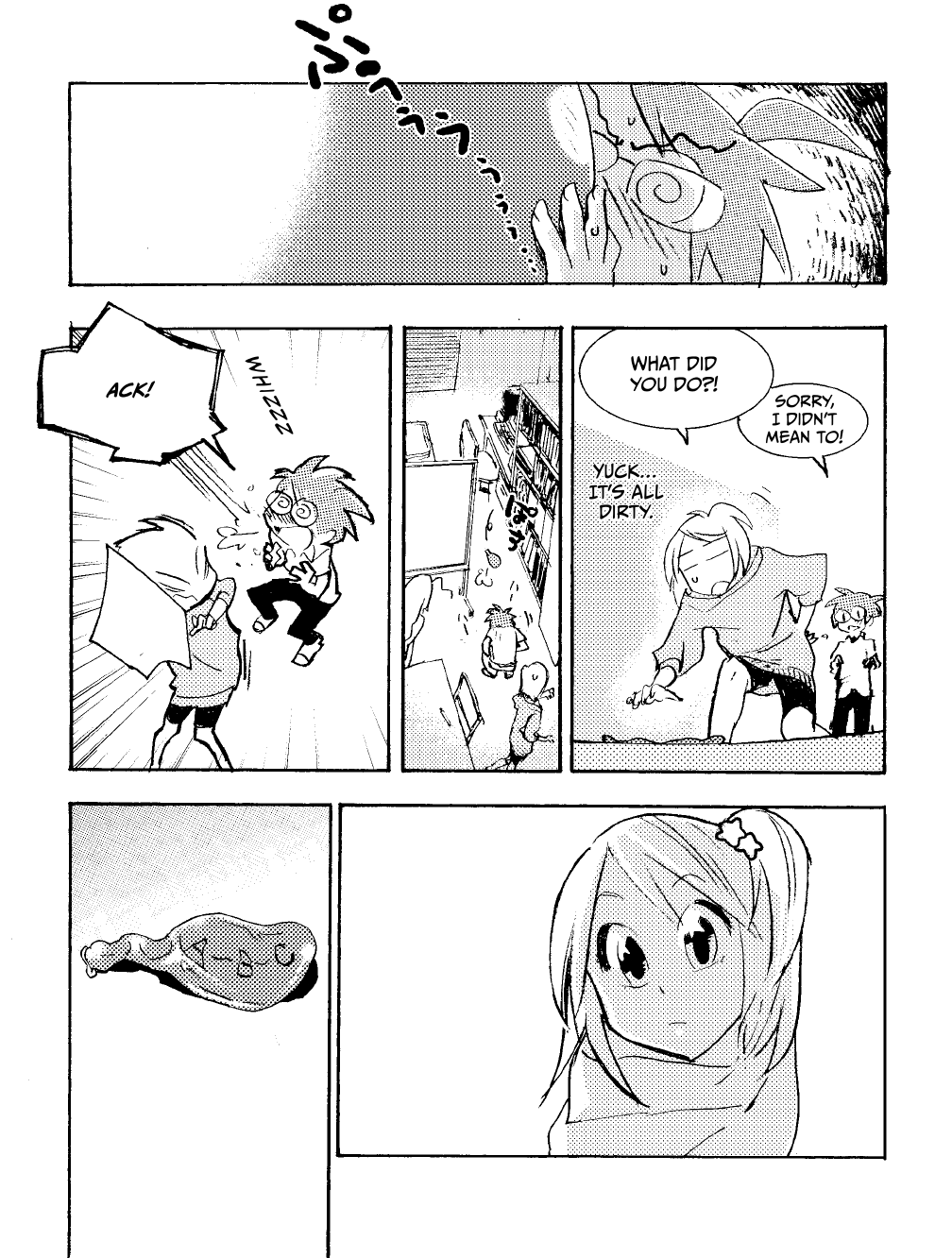 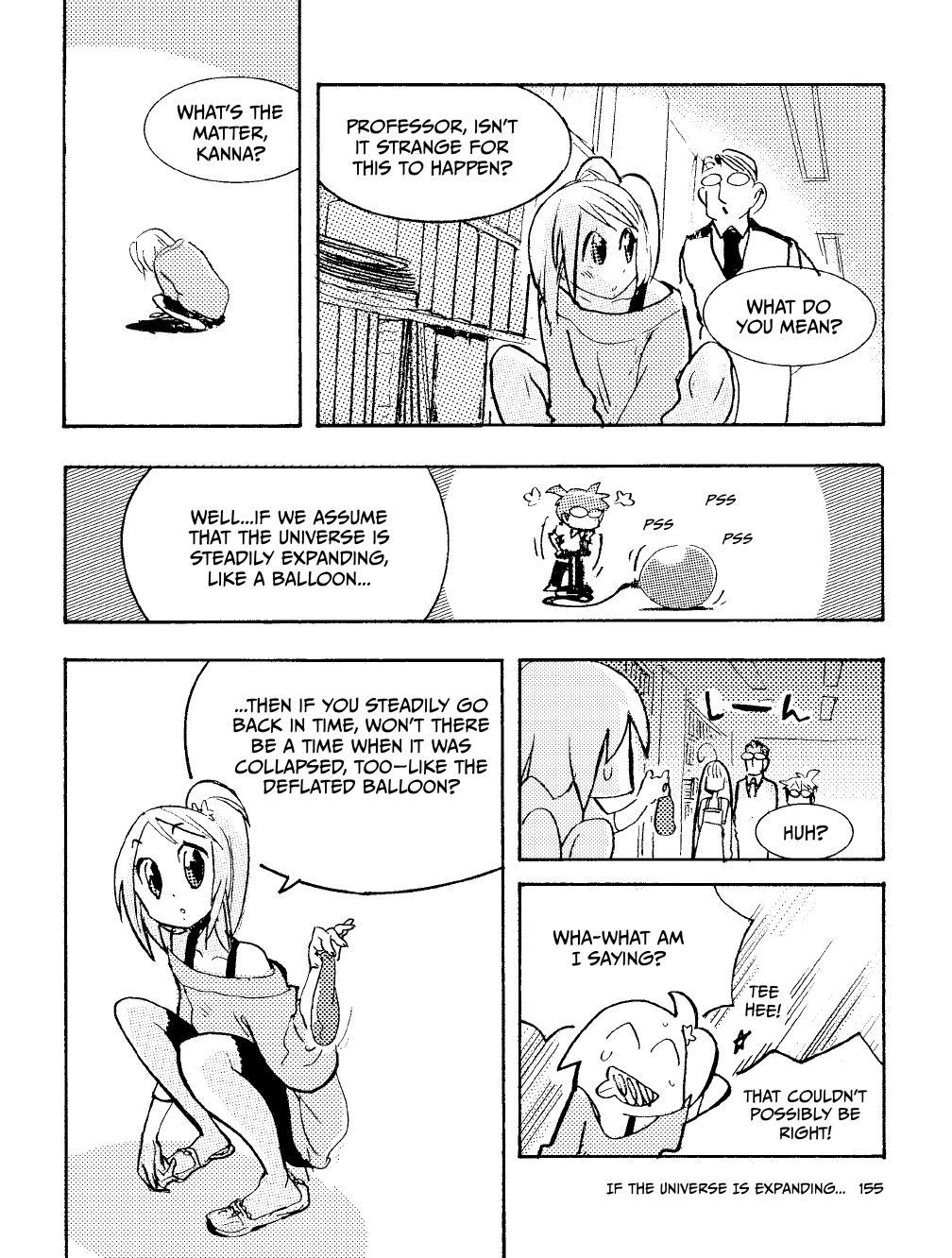