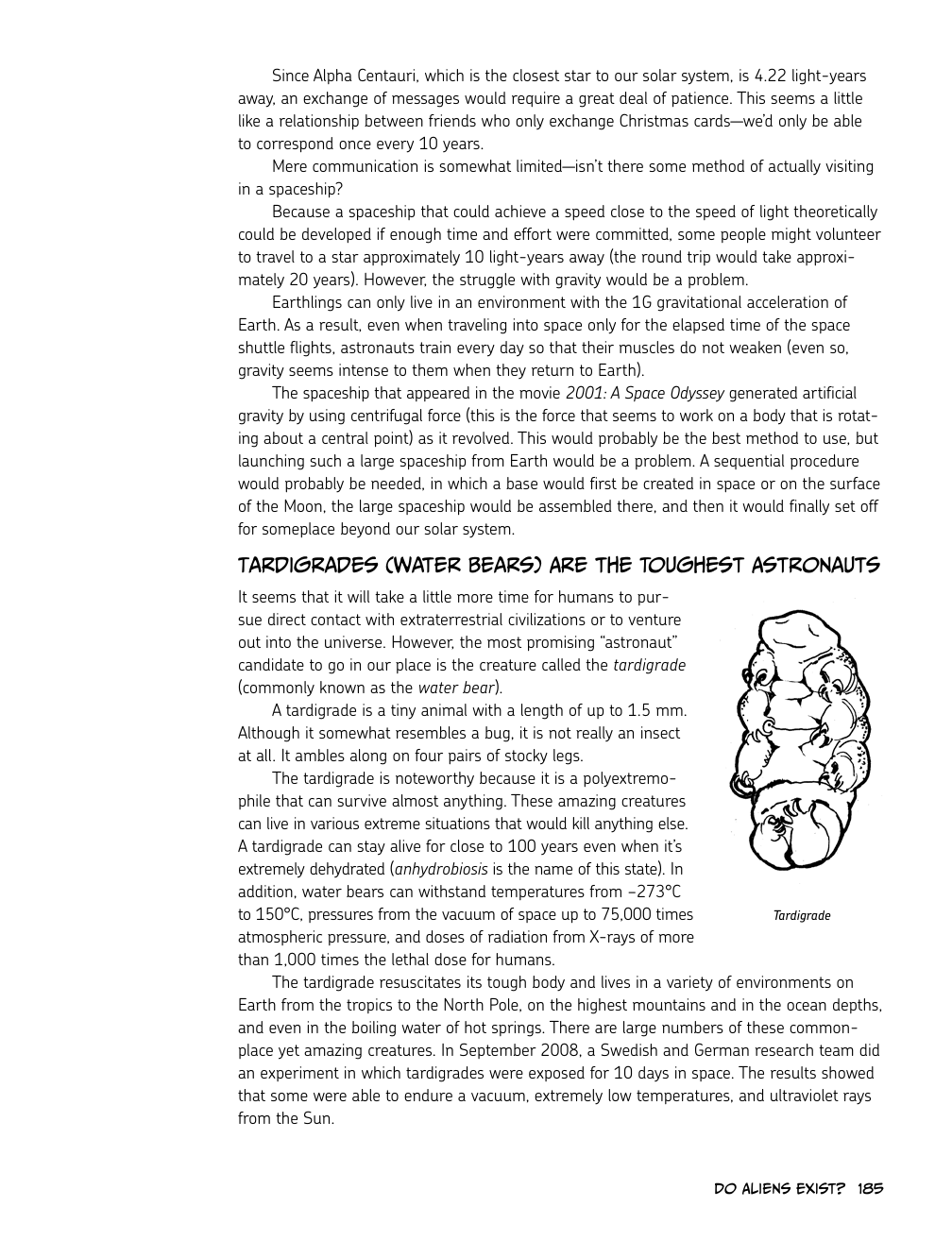 Do Aliens Exist? 185
Since Alpha Centauri, which is the closest star to our solar system, is 4.22 light-years
away, an exchange of messages would require a great deal of patience. This seems a little
like a relationship between friends who only exchange Christmas cards—we’d only be able
to correspond once every 10 years.
Mere communication is somewhat limited—isn’t there some method of actually visiting
in a spaceship?
Because a spaceship that could achieve a speed close to the speed of light theoretically
could be developed if enough time and effort were committed, some people might volunteer
to travel to a star approximately 10 light-years away (the round trip would take approxi-
mately 20 years). However, the struggle with gravity would be a problem.
Earthlings can only live in an environment with the 1G gravitational acceleration of
Earth. As a result, even when traveling into space only for the elapsed time of the space
shuttle flights, astronauts train every day so that their muscles do not weaken (even so,
gravity seems intense to them when they return to Earth).
The spaceship that appeared in the movie 2001: A Space Odyssey generated artificial
gravity by using centrifugal force (this is the force that seems to work on a body that is rotat-
ing about a central point) as it revolved. This would probably be the best method to use, but
launching such a large spaceship from Earth would be a problem. A sequential procedure
would probably be needed, in which a base would first be created in space or on the surface
of the Moon, the large spaceship would be assembled there, and then it would finally set off
for someplace beyond our solar system.
Tardigrades (Water Bears) Are the Toughest Astronauts
It seems that it will take a little more time for humans to pur-
sue direct contact with extraterrestrial civilizations or to venture
out into the universe. However, the most promising “astronaut”
candidate to go in our place is the creature called the tardigrade
(commonly known as the water bear).
A tardigrade is a tiny animal with a length of up to 1.5 mm.
Although it somewhat resembles a bug, it is not really an insect
at all. It ambles along on four pairs of stocky legs.
The tardigrade is noteworthy because it is a polyextremo-
phile that can survive almost anything. These amazing creatures
can live in various extreme situations that would kill anything else.
A tardigrade can stay alive for close to 100 years even when it’s
extremely dehydrated (anhydrobiosis is the name of this state). In
addition, water bears can withstand temperatures from −273°C
to 150°C, pressures from the vacuum of space up to 75,000 times
atmospheric pressure, and doses of radiation from X-rays of more
than 1,000 times the lethal dose for humans.
The tardigrade resuscitates its tough body and lives in a variety of environments on
Earth from the tropics to the North Pole, on the highest mountains and in the ocean depths,
and even in the boiling water of hot springs. There are large numbers of these common-
place yet amazing creatures. In September 2008, a Swedish and German research team did
an experiment in which tardigrades were exposed for 10 days in space. The results showed
that some were able to endure a vacuum, extremely low temperatures, and ultraviolet rays
from the Sun.
Tardigrade