210 Chapter 4 What Is It Like at the Edge of the Universe?
Incidentally, suppose that we had a spaceship with some sort of “warp drive” that
allowed us to move by entering four-dimensional space and then re-entering three-dimen-
sional space at a different location. To people observing us, our ship would appear to just
vanish through a “warp” in space and then appear suddenly elsewhere.
Well, then, what is the shape of three-dimensional space?
Although I will omit the difficult explanation here, according to mathematical calcula-
tions, it is like one of the following three models.
In the first model, where the curvature of space is zero, space continues to extend no
matter where you go. When illustrated in two dimensions, space is a plane that goes on for-
ever. Although the figure appears to have an edge, since the plane actually continues in all
directions, you absolutely cannot reach the edge of the universe as long as you move within
three dimensions.
In the second model, where the curvature is positive, space is a spherical surface like
that of a globe when it is represented as a two-dimensional model.
In the third model, where curvature is negative, space is “saddle shaped”—it curves up
and it curves down.
If we consider the spherical surface with positive curvature as the model of our uni-
verse, a spaceship that travels in three dimensions while aiming for the edge of the universe
will eventually return to its original location.
If we could build a spaceship that could travel faster than the speed of light, it might
be able to reach hyperspace at the edge of the universe through a space warp. However, as
long as we are in three-dimensional space, travel faster than the speed of light cannot occur
because of the constraint of the theory of relativity. In other words, no matter how far we
travel, we cannot get to the edge of the universe and, at best, will only return to our original
point of departure.
2-D Universe Model 1 2-D Universe Model 2 2-D Universe Model 3

Profeor Sanuki's Soliloquy 211
The universe
is so
mysterious...
Since I came from
that universe, I
wi ask humans
to ponder its
mysteries so that
they may learn
ofthe universe
and the universe
may learn of
them.
Isn’t that right,
Mr. Sanuki?
That’s right. As a
wise man of earth,
it is my miion to
sk answers to
such questions.
Kaguya-hime did
not return to her
home planet, but
she continued to
live haily on Earth
while talking about
the universe with
this knowledgeable
viager.
Bravo...
Bravo!!
CLAP
CLAP
CLAP
CLAP 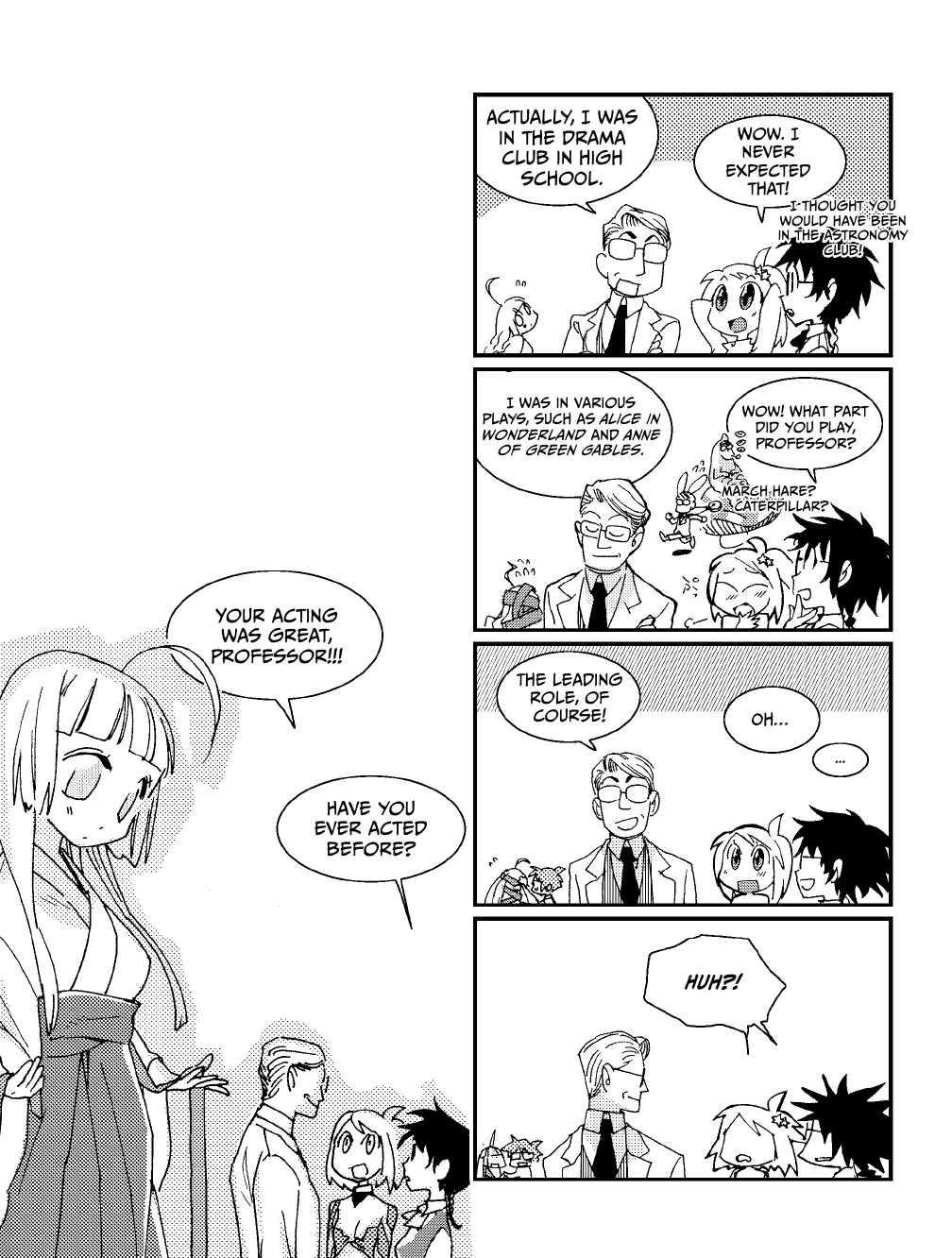 Your acting
was great,
Profeor!!!
Have you
ever acted
before?
Actuay, I was
in the drama
club in high
schl.
Wow. I
never
expected
that!
I was in various
plays, such as Alice in
Wonderland and Ae
of Grn Gables.
Wow! What part
did you play,
Profeor?
The leading
role, of
course!
Oh…
...
Huh?!
I thought you
would have bn
in the astronomy
club!
March hare?
Caterpiar?