WCDMA for UMTS: HSPA Evolution and LTE, 5th Edition by

Get full access to WCDMA for UMTS: HSPA Evolution and LTE, 5th Edition and 60K+ other titles, with free 10-day trial of O'Reilly.

WCDMA was specified with the chip rate of 3.84 Mcps and nominal carrier spacing of 5 MHz in Release 99. 3GPP releases included a number of evolution steps but all the enhancements were limited to the same 5 MHz bandwidth until Release 7. Release 8 brought dual cell HSDPA (DC-HSDPA) which enables a single UE to receive on two adjacent carriers. Release 9 further extends the dual cell approach to the uplink and combines the downlink DC-HSDPA with MIMO. Release 10 will specify support of three and four carriers in the downlink direction. The HSPA multicarrier evolution is summarized in Figure 16.1. The main benefits of multicarrier solutions are higher data rates and better trunking efficiency in multicarrier sites. The peak data rate evolution is shown in Table 16.1: four carriers and MIMO give a theoretical maximum rate of 168 Mbps. Multicarrier evolution co-exists with any legacy WCDMA and HSPA UEs on the same carrier, which makes the introduction of multicarrier HSPA a smooth process. 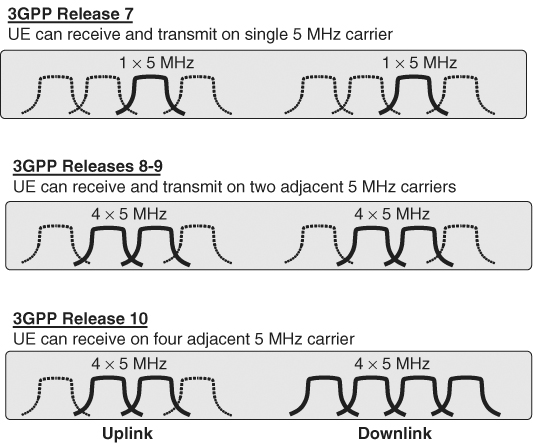 Get WCDMA for UMTS: HSPA Evolution and LTE, 5th Edition now with the O’Reilly learning platform.