Windows 8 All-in-One For Dummies by

Get full access to Windows 8 All-in-One For Dummies and 60K+ other titles, with free 10-day trial of O'Reilly.

Flickr, as shown in Figure 3-1, is a great place to put your picture collection, so the pics are easy to organize and share with friends and family. If you’re a serious photographer and want to get your pictures noticed and published — and you don’t care about making money with them — Flickr has great features and community.

Figure 3-1: Flickr revolves around photos and sharing your photos with your friends. 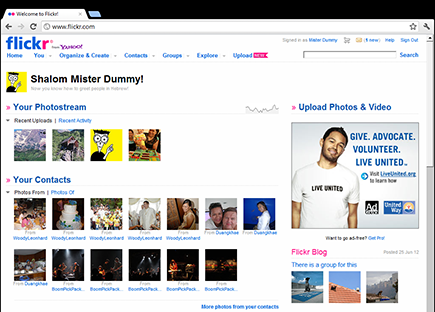 Flickr was created in 2004, and bought by Yahoo! in 2005. One of the few Yahoo! acquisitions that hasn’t gone into a downward spiral, Flickr now has more than 50 million registered users, with more than 6 billion pictures online.

Pinterest, by contrast, is a young upstart, which only opened its doors (and web pages) in 2010. It’s been growing exponentially. In January, 2012, Pinterest overtook LinkedIn (see Book V, Chapter 4), YouTube, and Google+ for the total number of referrals to other sites. Pinterest (see Figure 3-2) is a visual bookmarking ...

Get Windows 8 All-in-One For Dummies now with the O’Reilly learning platform.