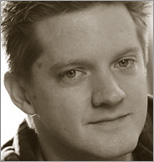 Brett McLaughlin is a bestselling and award-winning non-fiction author. His books on computer programming, home theater, and analysis and design have sold in excess of 100,000 copies. He has been writing, editing, and producing technical books for nearly a decade, and is as comfortable in front of a word processor as he is behind a guitar, chasing his two sons and his daughter around the house, or laughing at reruns of Arrested Development with his wife.

Brett spends most of his time these days on cognitive theory, codifying and expanding on the learning principles that shaped the Head First series into a bestselling phenomenon. He's curious about how humans best learn, why Star Wars was so formulaic and still so successful, and is adamant that a good video game is the most effective learning paradigm we have.

What Is Node? by Brett McLaughlin July 2011

What Is HTML5? by Brett McLaughlin July 2011

Webcast - Effective Communication: Making your point in a video-game culture May 19, 2009 In this 60-minute webcast, learn the fundamentals of effective communication. You'll understand how to tailor any content to be engaging, and to speak to your audience's needs in a manner to which they'll respond and interact.

“For readers just starting on design, or those wanting a good introduction without the density of Booch’s book, there is no better option than Head First Object-Oriented Analysis & Design. The Head First series of tutorials from O’Reilly are informal introductions to topics that include puzzles, quizzes, made-up dialogs, and numerous graphical elements that both entertain and instruct. This style is not to everyone’s liking, but it is undeniably effective as a means of teaching technical topics. In almost every category in which there is a Head First title, that book appears on the list of best-sellers on Amazon’s website. Of the Head First volumes I’ve seen, this one and the one on Java are probably the two best.”

“I found it hard to write a review about this book. Why? Because apart from a few, very minor typos it is simply superb! In my opinion, it is one of the best and sure to be one of the most influential books in this subject area. The O’Reilly Head First series of books are fast becoming the de facto standard, and I recommend that anyone who wants to get a deeper understanding of how you should approach designing and developing software, read this book, no matter what your background or current skill set is. To date, I’ve read this book twice, cover to cover. It is not a particularly thin book, but it is very easy to read...It is a practical, readable and refreshing step-by-step walkthrough of the development process. It covers how to incorporate flexibility into all aspects of the software development life cycle. This book leads you through simple and then more advanced concepts by allowing you, the reader, to make the connections. In addition, it gives an easy to understand introduction to UML class diagrams.”

“If you need to know a lot about the use of XML in Java (and who doesn't need that), the book gives you the needed information. Sometimes it was a bit boring, because of the wealth of given generalized toolkits. But if I use one of those toolkits, I know where I can get relevant information about it. I recommend it more as a book of references, than a book you should read from start to finish.”

“Are you developing with Java and need to use XML? If you are, then this book is for you. Authors Brett McLaughlin and Justin Edelson, have done an outstanding job of writing a book that that cuts through all of the hype about XML and put it to work...This most excellent book shows you how to use the APIs, tools, and tricks of XML to build real world applications. Perhaps more importantly, this book offers a new approach to managing information that touches everything from configuration files to web sites.”

“...a core acquisition for the personal, academic, and professional computer library seeking a solid reference with respect to Java and XML applications.”

“If you're a software developer or engineer - or a library catering to such patrons - you have to keep Head First Object-Oriented Analysis & Design in your reference section. It appeals to newcomers to the field, offering all the basics on how to analyze, design, and write serious object-oriented software, and explains the principles in language that assumes no prior familiarity with such analysis. Plenty of real-world examples and applications make for a top recommendation.”

“The first book written about Object-Oriented Analysis & Design (OOAD) that seeks to present information in the way that your brain works. It approaches the software development process with an emphasis on software, not code, on depth, not breadth. Using modern research in neurobiology, cognitive science, and learning theory, the authors stress the importance of the application rather than the theory. The objective of the book is to show readers how to analyze, design, and write valid object-oriented software that can be reused, maintained, and extended.”

“The Head First series is unique in that it makes it fun to learn a new and maybe somewhat confusing topic (like OOP). It takes the material and uses exercises, illustrations, and simple games to help the reader understand the information the author is trying to get across. It is not for everyone, but it's a great way in my opinion to teach the reader the material that helps them from not getting too bored. If you quickly glance at the book and see the many images that do not seem to relate to the material at all you will miss the really great material that is hidden within it. You really need to read the first 10 pages to know if this is the book for you or not. But if you do, then I am really sure you will want to continue to read the rest of the book. ...A great book that I highly recommend.”