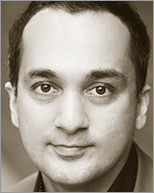 Nitesh Dhanjani is a well known security researcher, author, and speaker. Dhanjani is the author of "Abusing the Internet of Things: Blackouts, Freakouts, and Stakeouts" (O'Reilly), “Hacking: The Next Generation” (O’Reilly), “Network Security Tools: Writing, Hacking, and Modifying Security Tools” (O’Reilly) and “HackNotes: Linux and Unix Security” (Osborne McGraw-Hill). Dhanjani has been invited to talk at various information security events such as the Black Hat Briefings, RSA, Hack in the Box, Microsoft Blue Hat, and the NSTAC committee. Dhanjani's work has been reported by large media outlets such as CNN, Reuters, MSNBC, and Forbes.

Dhanjani is currently Executive Director at a large consulting firm where he advises executives at the largest corporations around the world on how to establish and execute multi-million dollar cyber security programs. Dhanjani is also responsible for evangelizing brand new technology service lines around emerging technologies and trends, including IoT, Big Data, Cloud, and Mobile security.

Dhanjani graduated from Purdue University with both a Bachelors and Masters degree in Computer Science.

Abusing the Internet of Things by Nitesh Dhanjani August 2015

“It says everything it should without the endless repeating and rephrasing so that readers would understand the concept, because it was so clearly explained the first time. This is a book that will get and keep your attention, and a must-read book for everyone dealing with computer and information security.”

“I'd really recommend Hacking: The Next Generation to my fellow techies. More important than learning new ways to mess with each other's minds, it will expose you to a number of new attack vectors that you may not have considered. And in most cases, simple awareness of those new vectors is enough to allow you to start to defend against them. ”