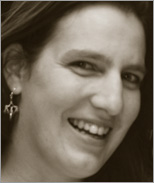 Kaliya Hamlin a.k.a. Identity Woman is a leader in the user-centric identity community. She is the co-producer of the Internet Identity workshop, unconference faciltiator, and organizer of She's Geeky, a women in technology conference.

Her passion is to work with others to grow thriving communities that can successfully address [not a big fan of the "beat" metaphor] the tough challenges facing the network, read her blogs about this work on Unconference.net. Events she has led include the Internet Identity Workshop, MashupCamp, the Datasharing Summit, and she recently led the participant driven days of Supernova, BlogHer, Gnomedex, and Office 2.0.

As Identity Woman Kaliya is an expert in the ecology of people, companies and organizations working on innovating identity tools and systems on an internet scale. Since 2004 when she was hired by Identity Commons(1) to evangelize about its work around user-centric digital identity she has bee a key community catalyst. Kaliya's persona as Identity Woman emerged in January 2005. She was presented the 2006 Digital Identity World Award for this work (previous winners include Kim Cameron, Chief Identity Architect for Microsoft and the Liberty Alliance). She currently is working as the Chief Catalyst of Identity Commons(2) a loose organization formed with over a dozen working groups focused on the social, legal and technical aspects of the emerging identity layer. She has spoken about these topics at events such as SuperNova, Mix07, O'Reilly's Emerging Telephony and Web 2.0 Expo.

Kaliya Hamlin has been an active member of the Planetwork community for four years and now serves as its Network Director. The network is at the intersection of IT and social/environmental good, providing community and project-sharing opportunities for conscious geeks.