Algorithms and architecture for job recommendations

Lessons from building a large-scale machine learning pipeline at Indeed. 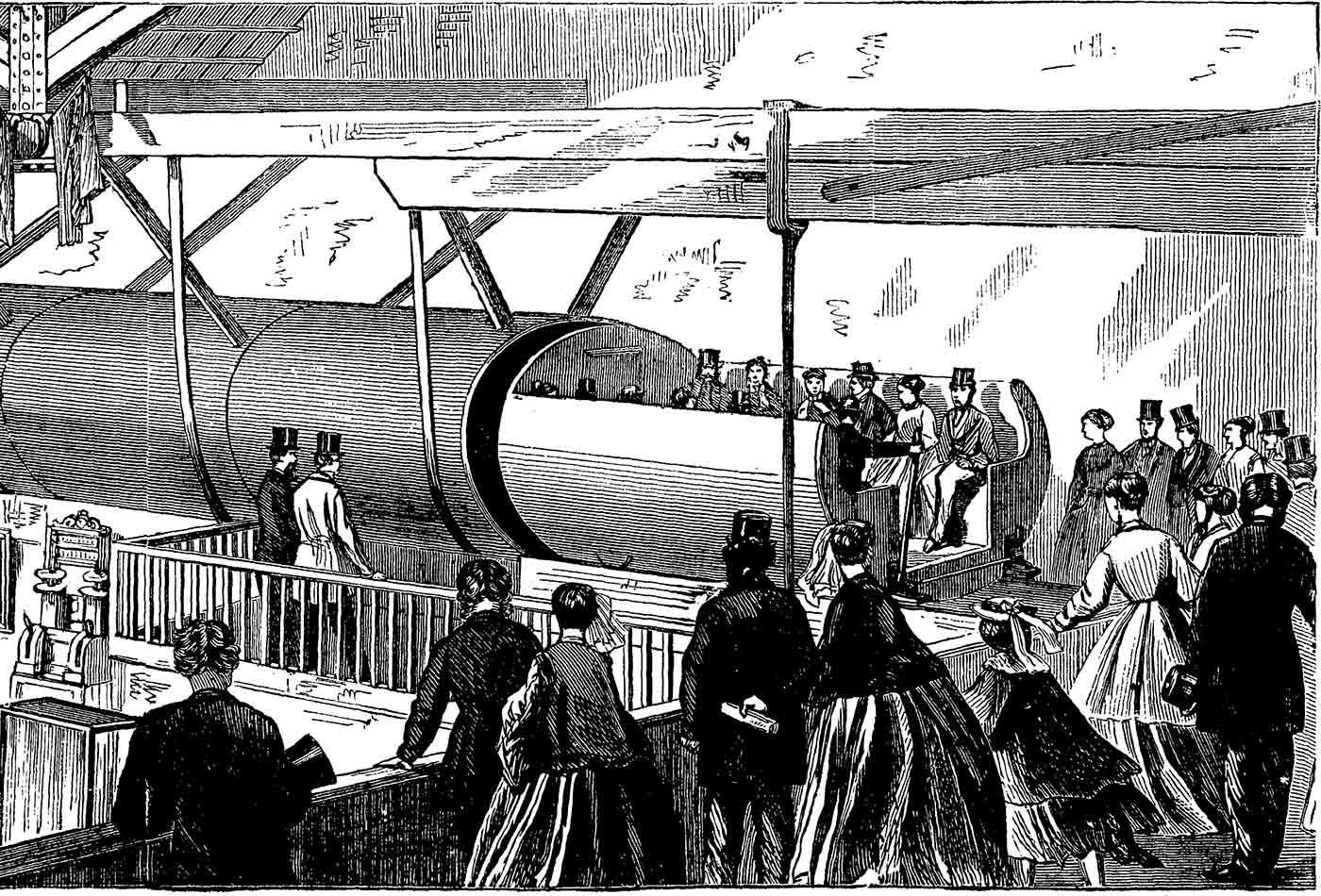 The Pneumatic Passenger Railway, as erected at the American Institute, 1867. (source: Via Google Books on Wikimedia Commons)

With 200 million unique visitors every month, Indeed.com relies on a recommendation engine that processes billions of input signals every day. In this article, we’ll describe the evolution of our recommendation engine, from the initial minimum viable product (MVP) built with Apache Mahout, to a hybrid offline + online pipeline. We’ll explore the impact these changes have had on product metrics and how we’ve addressed challenges by using incremental modifications to algorithms, system architecture, and model format. To close, we’ll review some related lessons in system design that apply to any high-traffic machine learning application.

From search engine to recommendation

Indeed’s production applications run in many data centers around the world. Clickstream data, and other application events from every data center, are replicated into a central HDFS repository, based in our Austin data center. We compute analytics and build our machine learning models from this repository.

Our decision to go beyond search and add job recommendations—as a new mode of interaction—was based on several key reasons:

Recommending jobs is significantly different than recommending products or movies. Here are just a few of the things we took into careful consideration as we built our engine:

How to approach recommendation algorithms

Recommendations are a matching problem. Given a set of users and a set of items, we want to match users to their preferred items. There are two high-level approaches to this type of matching: content based and behavior based. They each have pros and cons, and there are also ways to combine them to take advantage of both techniques.

Behavior-based approaches leverage user behavior to generate recommendations. They are domain-agnostic, meaning the same algorithms that work on music or movies can be applied to the jobs domain. Behavior-based approaches do suffer from a cold start problem. If you have little user activity, it is much harder to generate good quality recommendations.

We started by building a behavior-based recommendation engine because we wanted to leverage our existing job seeker traffic and click activity. Our first attempt at personalized recommendations was based on Apache Mahout’s user-to-user collaborative filtering implementation. We fed clickstream data into a Mahout builder that ran in our Hadoop cluster and produced a map of users to recommended jobs. We built a new service to provide access to this model at runtime, and multiple client applications accessed this service to recommend jobs.

As an MVP, the behavior-based recommendation engine showed us that it is important to start small and iterate. Building this system quickly, and getting it in front of users demonstrated that these recommendations were useful to job seekers. However, we quickly ran into several problems using Mahout on our traffic:

We addressed the most important problem first: the builder was too slow. We found that user-to-user similarity in Mahout is implemented by comparing every user to every other user in n^2 time. For U.S.-only traffic (50 million UVs), this amounts to 15 * 10^15 comparisions, which is intractable. This calculation is also batch in nature. Adding a new user or a new click event requires recalculating all similarities.

We realized that recommendations were an inexact problem. We were looking for ways to find the closest users to a given user, but we didn’t need 100% accuracy. We looked for ways to approximate similarity without having to calculate it exactly.

Our implementation of MinHash for recommendations involved the following three phases:

MinHash’s mathematical properties allow us to address recommending jobs to new users, and recommending new jobs to all users. We update the MinHash signature for users incrementally as new clicks come in. We also maintain a map in memory of new jobs, and their MinHash clusters. By keeping these two pieces of data in memory, we are able to recommend jobs to new users after they click on a few jobs. As soon as any new jobs posted throughout the day receive clicks, they are recommended to users.

After transitioning to MinHash, we had a hybrid recommendation model consisting of an offline component that builds daily in Hadoop, and an online component implemented in memcache, consisting of the current day’s click activity. Both models are combined together to compute the final set of recommendations per user. The recommendations for each user became a lot more dynamic after we made this change because they would update as users clicked on jobs that interested them.

With these changes, we learned that we could trade off a little bit of accuracy for a lot of performance. We also learned to complement a slower offline model with an online model for fresher results.

The impact of engineering infrastructure

The recommendation model that contained a map from each user to their recommendations was a large monolithic file. Because jobs are local to each country, we first attempted to shard our data into zones based on approximate geographic boundaries. Instead of running one builder for the entire world, we ran one builder per zone. Each zone consisted of multiple countries. As an example, the East Asian zone contains recommendations for China, Japan, Korea, Hong Kong, Taiwan, and India.

Even after sharding, some of our zones produced data files that were too big and took hours to copy from our Austin Hadoop cluster over a WAN to a remote data center in Europe. To address this, we decided to ship recommendation data incrementally rather than once per day. We reused sequential write ahead logs and log structured merge trees to implement this. This was already validated in other large production applications at Indeed, like our document service.

Instead of producing a large model file, we modified our builder to write small segments of recommendation data. Each segment file is written using sequential I/O and optimized for fast replication. These segments get reassembled into a log structured merge tree, in recommendation services running in remote data centers.

This infrastructure change caused users to see their new recommendations hours faster in remote data centers. From our A/B testing of this change, we saw a 30% increase in clicks due to the fact that users got newer recommendations faster.

This improvement demonstrated that engineering infrastructure improvements can make as much of an impact on metrics, as algorithm improvements.

Building out the pipeline to compute and update recommendations was only the beginning. To improve the coverage and quality of recommendations, we needed to increase our A/B testing velocity. We were making many decisions in the builder to tune the final set of recommendations. These decisions included similarity thresholds, the number of jobs to include in an individual’s recommendations, and different ways to filter out poor quality recommendations. We wanted to tweak and optimize every aspect of computing recommendations, but to do so would require building and shipping a new model per algorithm tweak. Testing multiple improvement ideas meant many times more disk and memory usage on the servers that handled requests from users.

We began to improve our A/B testing velocity by shipping the individual components of the recommendation calculation, rather than the final results. We changed the recommendation service to perform the final calculation, by combining the pieces together, instead of simply reading the model and returning results. Critical subcomponents of recommendations are cluster assignments per user, the mapping from each cluster to jobs in that cluster, and a blacklist for each user that contained jobs that should not be recommended for them. We modified our builder to produce these components and modified our service to put them together at request time to return the final list of recommendations.

By implementing this architectural change, we only shipped subcomponents that changed per A/B test. For example, if the test only tweaked what jobs got removed from a user’s recommendations, we would only ship the blacklist for the test group.

This change improved A/B testing velocity by orders of magnitude. We were able to test and validate several ideas that improved the quality and coverage of recommendations in a short period of time. Previously, we averaged testing one improvement in the model every quarter because of the overhead in setting up our experiments.

Our experience shows that A/B testing velocity should be considered when designing large machine learning systems. The faster you can get your ideas in front of users, the faster you can iterate on them.

This post summarizes a series of algorithmic and architectural changes we made as we built our recommendation engine. We build software iteratively—we start with an MVP, learn from it, and improve it over time. As a result of these changes, job recommendations grew from a small MVP to contributing 14% of all clicks, up from 3% in early 2014.

We continue to refine our recommendation engine. We are prototyping a model using Apache Spark, we are building an ensemble of models, and we are refining our optimization criteria to combat popularity bias.

We thank Jack Humphrey and Mandy Grover for their help in writing this post.