Control roaches with your smartphone. 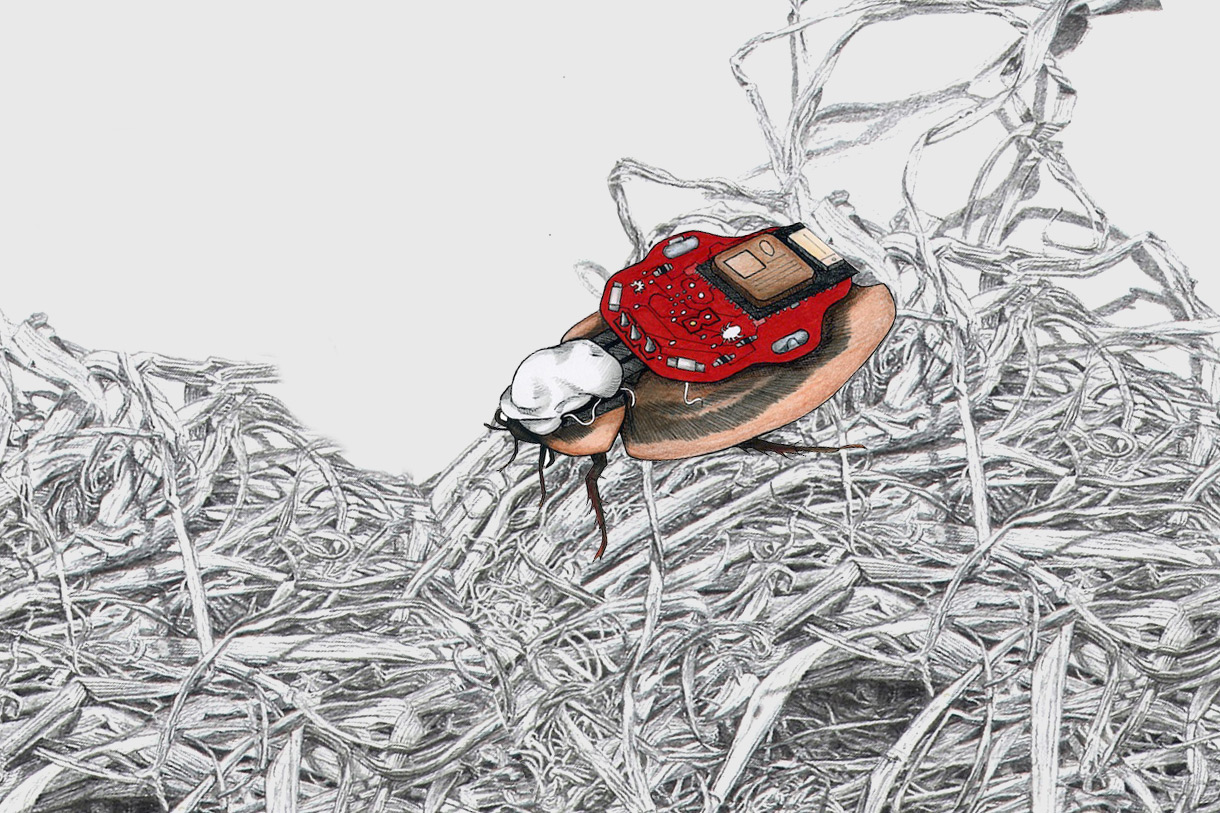 Is there a single development in the DIY realm cooler than the cyborg bug? There are certainly legitimate competitors: glowing plants, for example, and human cheese. But there’s something about seeing a big death’s head cockroach (B. discoidalis) outfitted with a minute, circuit board backpack and responding to cues from a human overseer via smartphone that makes your jaw drop.  Could it be that our command of the entire insect kingdom is at hand?

Of course not. But it’s a damned neat trick nonetheless. What’s more, it’s one that any intelligent and inquisitive person with average digital dexterity can accomplish, thanks to the handy RoboRoach Surgery Kit from Backyard Brains, an educational products firm focused on DIY neuroscience.

The package, explains the company’s cofounder and engineer Tim Marzullo, contains the PCB back, which carries the Bluetooth low-energy wireless receiver necessary for smartphone communication; an assortment of resistors, capacitors, and light-emitting diodes; a small battery; and three sets of electrodes (sufficient to implant three cockroaches).  Each electrode has three wires: one is used for the right antenna, another for the left antenna, and the third, functioning as the ground, is (gently) inserted into the dorsal surface of the insect’s thorax.

Cockroaches, says Marzullo, have neurons quite similar to that of human beings, just fewer of them.  They cluster in decentralized ganglia running down the body (a larger ganglion located in the head serves as the insect’s “brain”).

“Implanting the tips of the electrodes into the antennae creates a neural interface,” says Marzullo. “That allows you to send electrical signals similar to the ones naturally produced by the sensory neurons in the roach’s antennae.”

The signals sent via the PCB induce the neurons to fire electrical messages, known as “spikes” in neuro-speak, to the ganglia running down the roach’s body. By stimulating the neurons on the right antenna, you can make the roach turn left, and vice versa for the left antenna. Voilà: the roach will do your bidding. Resistance is futile.

“It’s our most popular product,” Marzullo says of the cyborg bug kit. “We have a RoboRoach TED talk up on our site that has had over two million hits.”

But the RoboRoach, of course, is more than a neat parlor trick involving a hefty insect. It’s a means to a larger end: teaching neuroscience to the young, from grade-school students through college undergraduates.

“I met our cofounder, Greg Gage, at the University of Michigan,” says Marzullo. “He’s an electronics engineer, and I’m in biotech, but we were both deeply involved in neuroscience. We often found ourselves at outreach events with school kids who were eager to learn what we do, and we wanted to demonstrate spiking activity, but we had no equipment. Its cost was way too high. So we began using off-the-shelf electronics to build kits that were both easy to use and illustrated how nervous systems work.”

Along with the RoboRoach kit, Backyard Brains sells several other DIY neuroscience products, among them the SpikerBox, a device that enables users to record cockroach neuron spikes; the EMG SpikerBox, an advanced version of the original SpikerBox that records neuron spikes in humans;  the RoachScope, which allows students to prepare quality slides for high-powered magnification; the Heart & Brain SpikerShield Bundle, a kit that lets experimenters record their own electroencephalograms; and perhaps most spookily (cue Twilight Zone theme), the Human/Human Interface Bundle, a package that empowers the experimenter to employ muscle signals to contract the muscles of another human being via a device known as a transcutaneous electrical nerve stimulator. All the devices employ open source hardware and software.

Not content with exploring the neural activity of the animal realm, the company has begun developing products that address plant electrophysiology. The Plant SpikerShield Bundle lets you record the electrical spikes of a Venus flytrap.

Backyard Brains is not yet in the black, but thanks to an unorthodox fiscal strategy, it does have sufficient operating revenue. Funding is balanced 50/50 between grants and sales, with 10% of the grant money coming from Chile and 90% from the NIH in the U.S. (The company also is “open source” about its finances, posting its books on its website.)

“We started receiving our Chilean support about three years ago,” says Marzullo. “After the big Chilean earthquake of 2010, the government decided to diversify the country’s economy, which was mostly resource-based—copper, agricultural products, fish. So they began funding some startup tech programs.”

Marzullo and Gage made the cut, and the company is now bi-continental, operating in offices from both Santiago and Ann Arbor.

“The good thing about working in Chile is that it’s easier to get government funding,” says Marzullo, who’s stationed in Santiago. “We did OK with NIH support, but the competition in the U.S. is incredibly fierce. In Chile, tech start-ups usually get 30%–40% of their seed funding, compared to 10%–15% in the United States. There are also a lot of very talented and motivated engineers in Chile.”

And the downside? Marzullo laughs ruefully.

“The financial system is fairly unsophisticated, and basic materials can be hard to get. There’s no Amazon here, no ordering something and receiving it the next day. There’s only one online store. It was established in the 1990s, and it’s not terribly efficient.”

For the foreseeable future, Backyard Brains intends to keep doing what it does best, says Marzullo:  providing affordable devices that make neurological processes compelling and understandable.

“Our primary goal is to provide the means for recording the interface of any biological electrical signal, whether it’s generated by a cockroach, human muscle, or plant,” says Marzullo. “A secondary goal is designing devices that allow you to exploit those signals to control other systems, such as we’re doing with our Human/Human Interface product. We think that’s a particularly interesting space.”