Lab in a box

Bento Bioworks wants to free DIYbio enthusiasts up to spend time on projects, not scouring the Internet for used equipment. 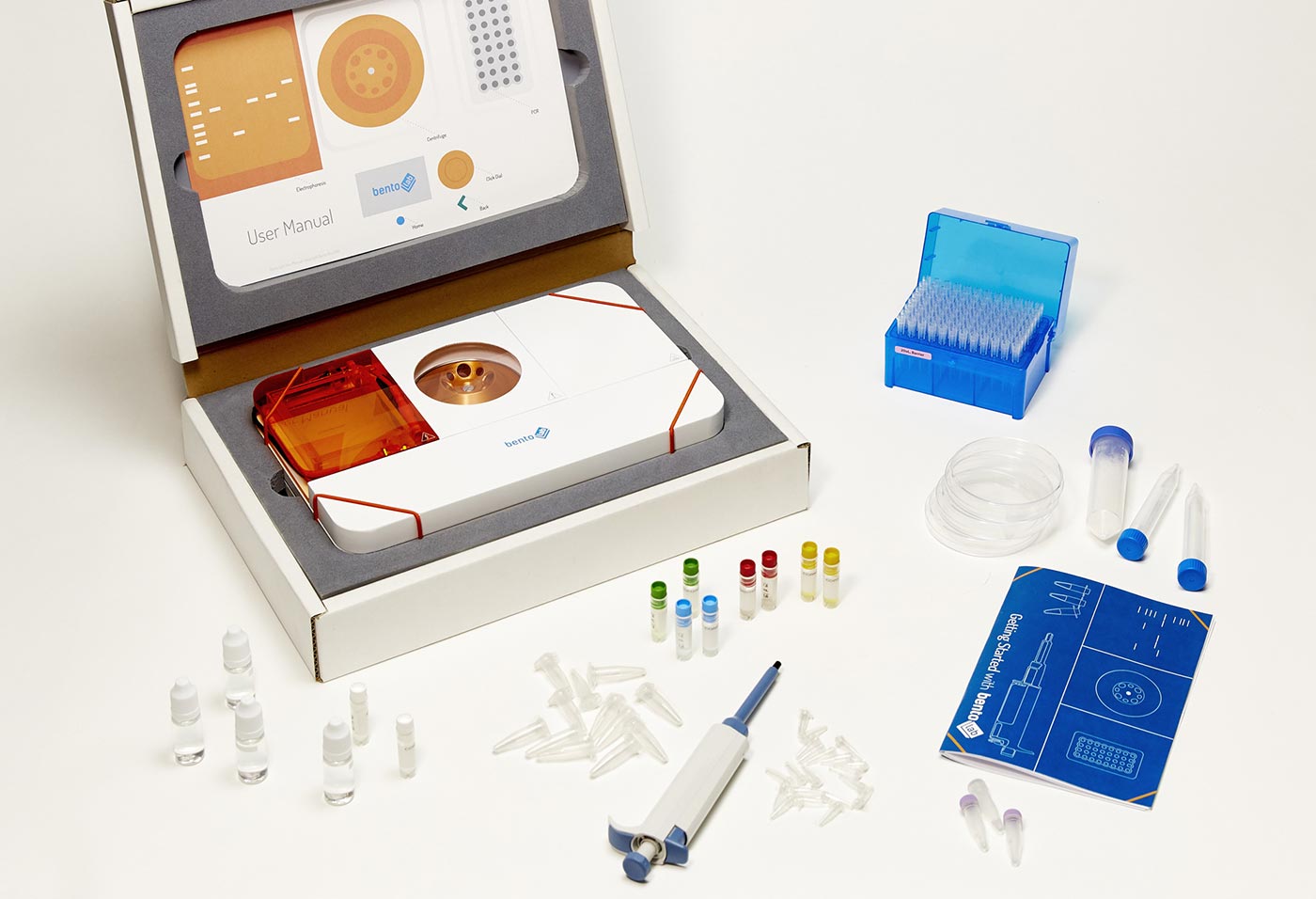 DIYbio may be expanding rapidly in popularity, but things are still sketchy when it comes to equipment. Enthusiasts work with what they can afford or scrounge, and make do. Perhaps that’s appropriate, particularly if you celebrate the movement’s garage ethos and think its current state is analogous to that of home computers in the 1970s, just before everything mushroomed and changed the world forever.

Still, you need basic, functional equipment, even if you’re working in a garage, basement, or small, co-op lab. And that’s central to Bento Bioworks cofounder (with Bethan Wolfenden) Philipp Boeing’s vision: To build that equipment and provide those standardized components so DIYbio enthusiasts can spend their time on projects, not scouring the Internet for used centrifuges.

“It’s DIYbio, not DIY build-your-own hardware,” says Boeing. “We realized that lots of folks interested in the field, including high school teams, citizen scientists and makers, we’re having difficulties finding equipment. You’d get together with them, and the conversations inevitably revolved more around hardware than biology. The equipment issue was getting in the way of the actual science. So we decided to do something about it. We wanted to put some infrastructure together that was both appealing and affordable.”

The result is the Bento Lab: a lunchbox-size DIYbio lab. Though compact, the Bento Lab has all the hardware a budding do-it-yourselfer needs to get hacking: a PCR machine, centrifuge, and gel electrophoresis unit with blue LED transillumination.

Encased in white plastic with cadmium-yellow trim, the Bento Lab looks decidedly, well, accessible. It has a retro feel, like a 1980s answering machine. That’s by no means happenstance, says Boeing.

Struggling with various design concepts, the Bento team took a mock-up case with labels to iGem 2013 and buttonholed biologists for their opinions.

“We asked them, ‘If this were a lab, what should it have, and where? How would it look? What would you like to see?’ For us, getting the dimensions right was even more critical than the hardware. We knew we could figure out the hardware end, but the package had to be appealing.”

The Bento Lab thus works against the stereotype that DIYbio only happens in garage labs festooned with expensive and arcane equipment. It’s the opposite of bespoke: standardized, compact, versatile, and easy to use.

“When we’ve described it, we’ve used the tagline, ‘The Arduino for DIYbio,’” says Boeing, “but that metaphor kind of backfired, so we gave it up. People were getting confused: they thought we were actually using Arduinos, and we don’t. What we were trying to say is that the Bento Lab replicates what works with the Arduino community. The larger goals are the same.”

The Bento Lab went through multiple iterations, says Boeing, but in the end, “closing in on the final design was a bit less difficult than we anticipated. The PCR machine was perhaps the trickiest part, and we also had some challenges with the centrifuge, since it has to be self-contained in case something spills.”

While the Bento Lab will allow scientists to pursue sophisticated research, it will also provide students, makers, and artists the means for learning about basic biotech processes, says Boeing.

“We want to improve bioliteracy, to demystify the technology,” says Boeing. “We want to give people the tools they need to understand the science involved with biotechnology so they can evaluate the political and social ramifications from a position of knowledge, not emotion. We’re neither pro- nor anti-GM. To take either position is like saying you’re pro- or anti-electronics, with the understanding you could build either a clock or a bomb with the technology. It’d be nice to have that kind of granularity with genetics. What we are intent on avoiding is selling anything that requires an application for a lab license. Since we consider schools a primary market, our emphasis is on safety and legality.”

While there are other DIYbio off-the-shelf kits emerging, none fills the Bento Lab’s niche. For a modest investment, it allows biotech enthusiasts the basic means to work with genes in fascinating and significant ways. Amino, an MIT Media Lab project that spun off into an independent startup, could be considered a contender, but it’s primarily a bioreactor designed to culture microorganisms, unmodified or otherwise.

“It’s a nice-looking unit, and it seems perfect for growing cells and collecting pertinent data,” says Boeing. “Considering that our lab is more a means for manipulating DNA, I think the two would mesh very well together.”

The Bento Lab currently is going through beta testing, says Boeing, “and we’re conferring with our manufacturers on the feedback. We plan to launch a Kickstarter campaign in February, and we’ll probably start our first production run by the second quarter of 2016. It has been–and remains–a long road, but we’re close to implementing our motto: bio for everyone.”