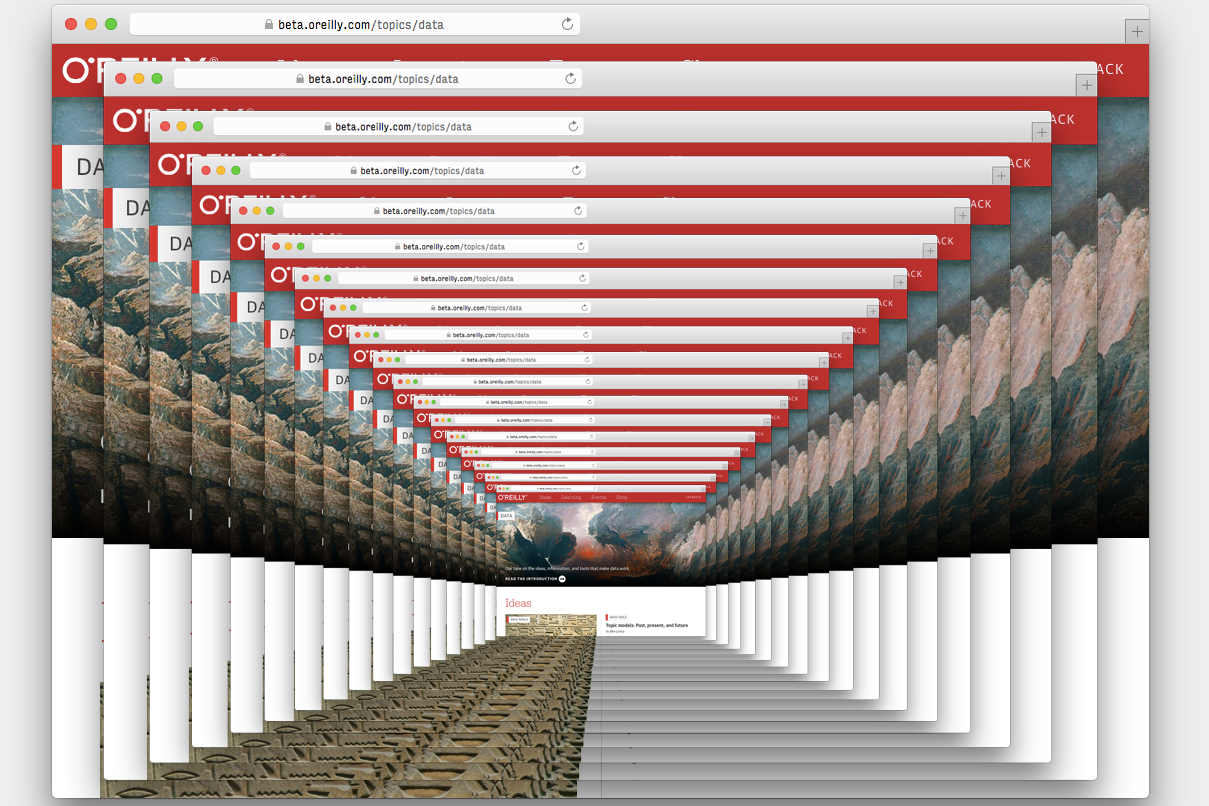 Screenshot of the screenshot

Some while back, we realized that O’Reilly is really in the education business — very specifically, the self-education and self-improvement business. People read our books, come to our events, and watch our videos because they need new skills and have the discipline and initiative to seek them out on their own. In a lot of ways, the history of the company has been searching out new ways to achieve the same goal, which 15 years ago I articulated as “changing the world by spreading the knowledge of innovators.”

That goal requires us to notice the ideas and technologies that are new and important; to find the people who have figured out how to make the most of those technologies; and of the people who’ve figured it out, to discover who has the willingness and the ability to invest in helping others to follow in their footsteps. Over time, pursuit of our goal has also required us to learn how to write, edit, publish, and distribute books; to run events that bring people together to learn from each other; and (more recently), to develop video training courses and other online learning products.

We aren’t the only ones who’ve noticed that O’Reilly is a learning company. I was delighted to see oreilly.com chosen as the #1 online course provider, ahead of MOOCs, video training companies, and others who explicitly position themselves as training providers. I like to think that the breadth of ways that we give people to learn — print, video, in-person, and interactive online — is unique because it doesn’t restrict itself to people who have one single learning style.

All of this is by way of explaining the redesign that we’re rolling out at beta.oreilly.com. Over the years, we’d let oreilly.com become mostly a front end for ecommerce, selling access to books and videos and conference seats, with a dose of reporting and advocacy on the side.

The redesign, which we’re rolling out in stages, puts learning front and center — framed by the big ideas and trends that shape our beliefs about what people need to learn to take best advantage of the emerging future. It’s far more than a cosmetic makeover; we’ve rethought the site from the ground up.

There’s probably no better illustration of this deep rethinking than the interactive learning content we’ve developed using Jupyter and our own Atlas authoring platform. This is not an entirely new kind of learning product for us — the O’Reilly School of Technology has long offered sandboxed experiential learning (along with instructor support) — but the ease of development and the support for multiple programming environments makes it super easy to develop powerful learning experiences.

And people are loving it! Here are a few of the responses we’ve seen on Twitter:

But cool as they are, the Jupyter-based tutorials are not the be-all and end-all of the redesign. The site has four main blocks: Ideas, Learning, Events, and Shop.

The Ideas block focuses on the big ideas that guide our work. One of the things that distinguishes O’Reilly from many other tech media sites is that we try to ignore the ephemeral news out of Silicon Valley — new product introductions, startups and acquisitions, marketing hype — and instead look for deep trends and the technologies powering them. I’ve frequently quoted Edwin Schlossberg, who once said “The skill of writing is to provide a context in which other people can think.” That sums up our aspiration.

And if you look at the history of the company, it is framed by the long arc of a series of big ideas: in the late ’80s, the rise of Unix and other “open systems” as an alternative to proprietary software; in the ’90s, the commercialization of the Internet and the rise of open source software; post the dot-com bust, we framed the next era of computing in terms of “Web 2.0” as collective intelligence and “big data”; we named the Maker Movement with the launch of Make: magazine in 2004; we framed the era of open government data and government as a platform; and we’re now continuing to explore the deep trends driving the Web, the Internet of Things, and the business of data.

In the Learning section, we highlight not just the Jupyter-based tutorials, but also our vast library of video learning content (among the largest and most diverse available anywhere) as well as our live webcast tutorials. What you see on the site is only a small sampling of what’s available via our Safari online subscription service (more than 2,500 O’Reilly books and videos, as well as another 35,000 from another 200+ publishers) for one monthly price.

We haven’t given up on ecommerce either! Not everyone wants the convenience of a single, all-you-can-eat subscription, so we also sell downloadable ebooks and videos, and even print books — not just from O’Reilly Media, but also from 30 other publishers and video providers.

And of course, in the Events section, you have access to the schedule of our upcoming events as well as video from past events.

But that’s not all. Like Steve Jobs at Macworld, there’s one more thing — and as was always true with Jobs, that “one more thing” is always the best! And that’s a section devoted to people.

There are no big ideas without the people behind them. World-shaking ideas don’t spring up out of nowhere; they are born in the genius and sweat of individuals who see the world in new ways, and are able to convince others that what they see is worth learning and following. (Yuval Noah Harari’s amazing book Sapiens frames human history as a history of imaginative persuasion: it is not just invention that is the engine of human civilization, but the cooperation that is engendered when people come, through persuasion of what was previously unthinkable, to share new ideas, ideas that only have power precisely because they are shared. And that persuasion is the gift of prophets, philosophers, and poets, not just of scientists and politicians.)

People are central to our business. Unlike many companies, most of the people who create value for our business don’t actually work for us. O’Reilly Media has 500 employees, but tens of thousands of contributors: authors, conference speakers, readers, and conference attendees; the entrepreneurs whose startups we invest in via OATV, our early-stage venture capital firm; and not to mention, folks who shape our thinking without ever meeting or talking with us.

What we have now on the site is really just a placeholder, a small selection of the many people who shape the world of ideas and learning we are exploring together. Over time, we hope to build out a much richer “people explorer” that will give you access to our network.

You will notice one other thing about the site: it’s just about data, one of our focus areas. That’s because we are big believers in the Lean Startup approach of developing a “minimum viable product,” instrumenting it, and then learning from how people use it. So, rather than revamping the entirety of the existing oreilly.com site, we’ve focused beta.oreilly.com on one small subset of the world we play in, and as we learn better what works and what doesn’t, we will roll it out to other focus areas and revamp the entire site.

We hope you will explore the new site and give us plenty of feedback!