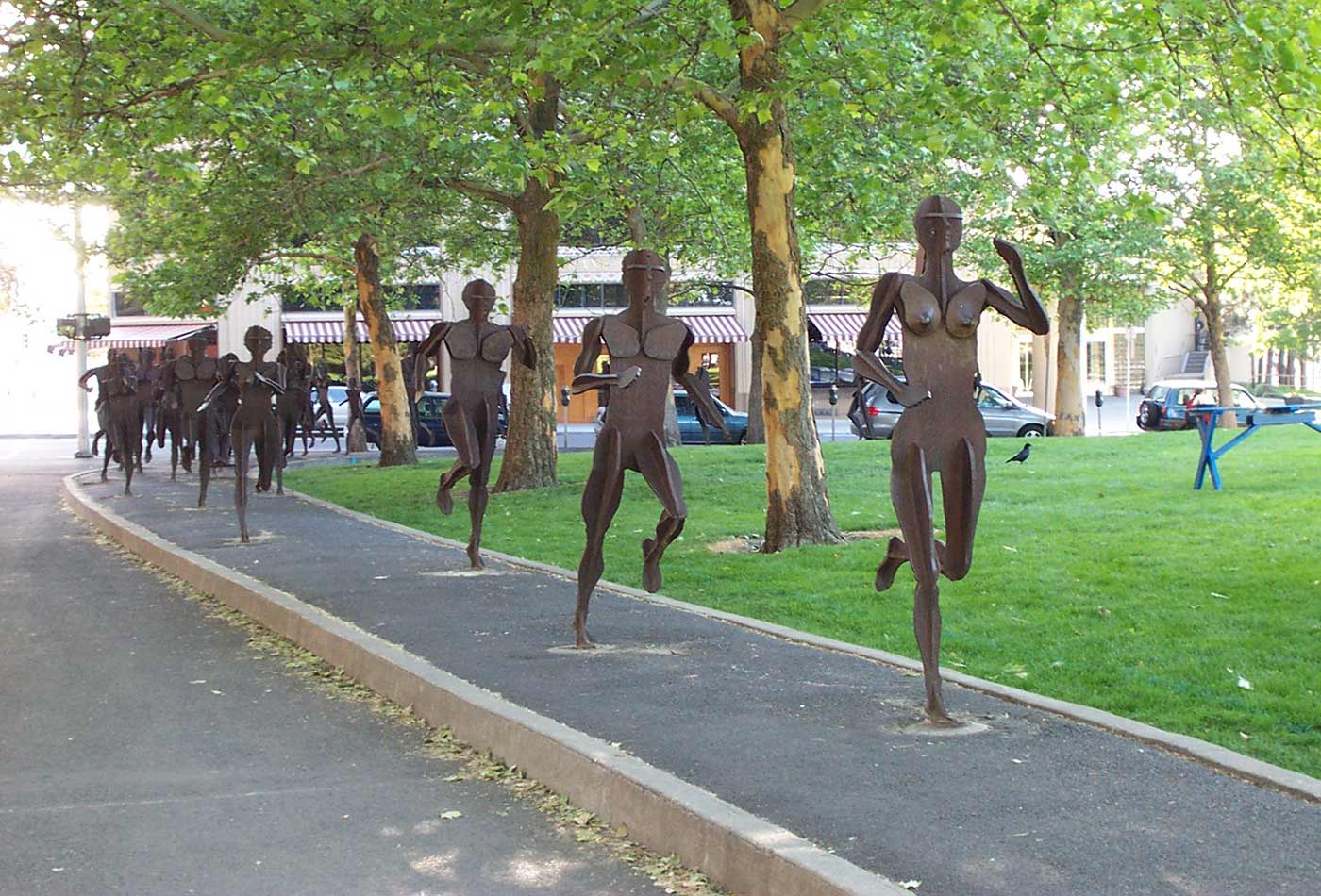 "The Joy of Running Together," a public work of art in honor of the annual Spokane Bloomsday Run. (source: Photo by Mark A. Taff on Wikimedia Commons)

This week’s episode features two conversations I’ve had recently centered around smart cities. First, I chat with Daniele Quercia, research team lead at Bell Labs. We talk about research he’s working on now; the launch of goodcitylife.org (including smelly maps and happy maps); why our use of technology shouldn’t just aim to make a city smart, but to improve the day-to-day quality of life of it’s citizens; and about the emerging areas of urban informatics he’s finding most compelling.

In our second segment, I chat with Frank Cuypers, associate professor at the University of Antwerp and strategist at Destination Think! We chat about the importance of urban DNA, his nonprofit project Why Your City, and why there’s no such thing as a smart city.

Daniele Quercia: “The idea and the rhetoric behind Smart City is one of efficiency and security. Usually they say a smart city is a city in which, if you go to work, you’re always going to be on time. If you go shopping, there is no queue. You know what? You’re going to feel really, really safe because of the CCTV cameras around you. It’s about efficiency, security. We all know that we don’t choose a city because of just efficiency and security. They make a city acceptable, but they don’t make a city great. What makes a city great are fuzzy concepts, concepts that are really difficult to quantify, like beauty, happiness, these sort of things. That’s why we built goodcitylife.org, which is a global network of people—researchers, people in industry, who really think there is an alternative agenda to the smart city agenda, and that’s what we want to do. We want to empower these people, and we want to also do research in this new area of simply giving a good life to people.”

Daniele Quercia: “Currently, I’m thinking about something related to algorithmic regulation. We wrote a paper that we presented a few weeks ago at the conference Dub Dub Dub Dub. The idea was that, basically, these platforms like Airbnb or Uber generate data. These data could be used for regulation. What we found out is that, for example, we look at the evolution of all Airbnb in London, and we look at which areas were affected. For those areas, we had census data. The idea was that now you can see how the evolution of Airbnb is related to different social economic conditions. Then you can see that certain areas, there might be some dodgy subletting going on, and you can regulate that because you can build an index after the data. The same thing, in general, that you can do with any platform, right? You generate data inside a city and then you take that data to build analytics that might be useful for policy-making? In theory. You can change your policies and then you can see the impact of those policies in the city, and so on.”

Frank Cuypers: “Of course, I’m a fan of smart cities. The thing is that … Let’s talk about data. Seth Godin wrote, ‘Data gets us the Kardashian’s.’ People become lazy. There are two many stakeholders that are sharing data, data, data, and they don’t have a clue what they are talking about. I have never met a politician who knows the difference between long data, big data, and short data. What is worrisome is that we’re building now sort of vendor-lock in places. For instance, New York. The council writes a letter to Google to ask: in Google Maps, it’s always that with your car, you go to the left. That causes a lot of traffic jams. If 30% in their maps could go to the right, it would solve the problem. They didn’t answer, and I don’t know whether they have answered already, but that’s not the point. Is it normal that you have to ask a private company to solve a traffic problem in a public space?

“What we need actually is—Jane Jacobs again, grassroots activism online. I say there is no such thing as a smart city because I really believe that cities are for humankind what the telephone booth is for Clark Kent. He goes in and in a split of a second, he transforms into Superman. We know that cities are the places where we could always transform our technology. It’s about technological disruption as well, and that’s a very good thing. But bring these two big trends together—on the one hand, you have the GNR, the genetics, the nanotechnology, the robotics, information technology. On the other hand, urbanization. 80% will live in cities in 2060. This is the most important thing we have to fix in our lives.”

Frank Cuypers:“Now, I’m very interested in people who go to the basic question, what is the economic foundation of our city? Someone who I really appreciate, and he’s not so known in the Anglo-Saxon world but he’s advising the Vatican and the State of Ecuador, is Michel Bauwens with his peer-to peer movement, where you really, really have a sharing economy. Uber and Facebook are in my world, but in my vision, they are not part of a sharing economy. They create a win-win situation: there is something free for you and there is some money to earn with your data. In the end, there is someone who always pays the bill.