The smart lab blends the best of humans and automation

BioBright is a new company that's trying to update the way people build, equip, use, and automate their laboratories. 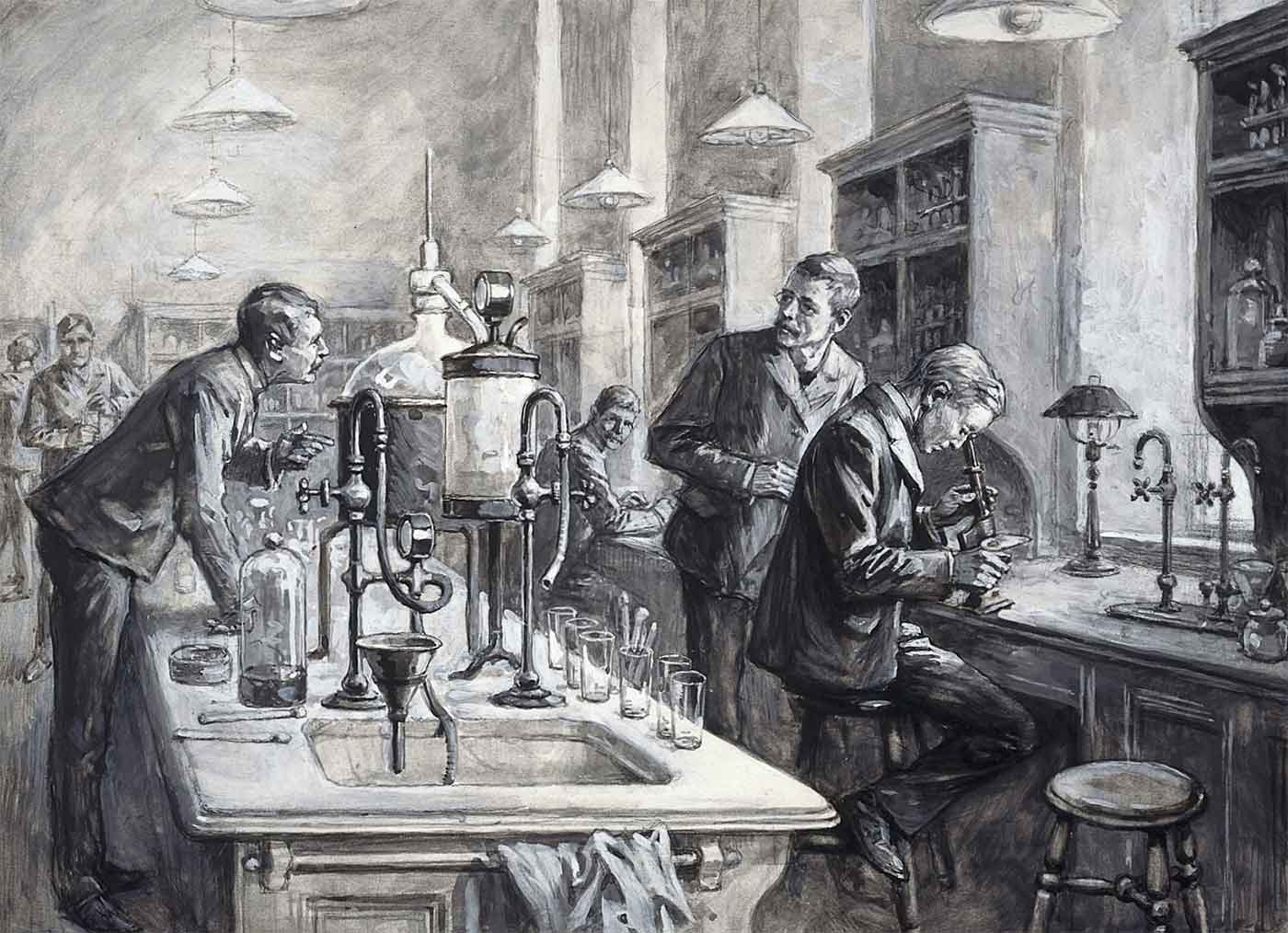 Of all the challenges implicit in biotechnology, one in particular galls Charles Fracchia: the laboratory. It is so basic to the field that it seems immutable. And that’s the problem, says Fracchia, a fabricator of molecular machines, a former MIT Media Lab associate, and the founder of the biomedical research firm, BioBright. To a large degree, the lab is immutable. For no apparent reason other than inertia, much of its equipment and many of its techniques have remained unchanged for decades.

It’s not just that outmoded tools and antiquated, entrenched protocols waste time and energy, observes Fracchia. They also yield irreproducible results due to human error and improperly accrued and analyzed data. At the least, this means a great deal of wasted effort and capital. And at worst? It’s potentially catastrophic. In the ever-accelerating pressure to publish, flawed studies are promoted as established fact. Respected journals are forced to retract articles. The entire peer review process is questioned. Not only are reputations ruined: human health and public safety can be threatened.

An obvious response to the lab conundrum, of course, is automation. And despite such homey and persistent anomalies like notebooks and timers, labs indeed are becoming more automated. But that’s not enough, Fracchia maintains.

“The deficiencies of the laboratory are well-known, even if people tend to cling to certain relics,” says Fracchia. “So the thinking is that we can solve a lot of the problems by taking the human out of the loop. But that’s not the right approach either. Biology is not computer science. It benefits from computer science, but it’s a different field. You can’t just turn a handle and crank out numbers. It that were the case, Big Pharma would have solved all our problems decades ago. My argument is that we don’t need an automated lab. We need a smart lab, one in which the human being is optimized, not replaced.”

Such a lab, says Fracchia, divides tasks among humans and machines depending on relative strengths and weaknesses.

“In most labs, we’re asking human brains to do things they’re really, really bad it,” he says. “We’re asking people to do repetitive, deterministic things, things that require impeccable memories. But our memories are inherently limited, and we’re lousy at repetition. Machines, on the other hand, are great at that kind of stuff, of creating and verifying longitudinal data. What we—human beings—are good at is context and pattern recognition. We’re good at taking verified data and figuring out what it means in regard to a given project or issue, and how to apply it to a specific goal. So what we’re talking about is not a robot lab, but a kind of Iron Man lab–a suit, if you will, that the researcher puts on that greatly enhances outcomes.”

So Fracchia and his partners—Ryan Harrison, Joel Dapello, Hao Zhang, Nate Johnson, Adam Marblestone, and Jen Weber—founded BioBright to design such a lab. Or rather, labs; because a truly smart lab, Fracchia avers, must be customized for specific goals. A lab that’s positively brilliant for one mission may be relatively stupid for another.

“The idea isn’t to create a cookie-cutter lab, a one-size-fits-all lab,” he says. “Biologists not only work at different disciplines–they work in different ways; each has a unique approach. So we’re not asking biologists to accommodate themselves to the lab. We’re focused on creating bespoke applications that accommodate and augment the biologist.”

That involves proprietary devices that essentially assume the scut work of the lab.

“By way of example, we have a little, completely encrypted wireless sensor that you can plug into any platform,” says Fracchia. “It can be mounted to any experiment. All the data flows to it automatically, and it can sample as often as you want. One month, two months or more later, you can go back and review the historical values.”

Getting back to notebooks: as Fracchia observes, they’re ubiquitous.

“Despite their profound shortcomings, everybody still uses them,” he says, “and that can lead to serious errors, even for the most meticulous researcher.”

There are electronic notebooks, Fracchia acknowledges, but they require human inputs; people still have to “write” in them.

“So we developed a platform that functions as a self-writing notebook,” Fracchia says. “It eliminates the very real drudgery of notebook updating, it eliminates human error, and it optimizes the one thing about notebooks that is absolutely essential: the creation of an established and reliable record. Our platform allows researchers to maintain a precise and verifiable log of the procedures and values of an experiment.”

Perhaps the most pressing need for the BioBright approach is in health care, where vast quantities of data on millions of individuals must be collected, analyzed, and correlated, a situation where errors are inevitable, given the clunky and ill-matched interfaces between machines and people that still characterize most medical labs.

“One of our clients is the University of Texas at Austin, which is the first tier-one university to build a new full-stack medical school in 50 years,” says Fracchia. “They contacted us, and we’re working with them to create infrastructure specifically designed to help doctors with analytical work. We’re helping build the smart health care facilities of the future. It’s incredibly exciting because we’re starting from scratch, starting clean, not trying to remedy existing and deficient systems.”

Along with medicine, Fracchia also is deeply interested in the “food space.” He recently participated in a conference on the future of food production sponsored by the Culinary Institute of America and MIT Media Lab.

“Medicine and food production both have deep connections to biotechnology,” says Fracchia, “and when it comes to lab work, both fields employ similar or identical processes. So our systems apply wherever biology applies.”

If Fracchia is highly skeptical of established lab protocols, he’s equally dissatisfied with the way most tech startups are funded these days. While venture capital usually is seen as the only practical means for getting new ideas and products to the marketplace, Fracchia maintains VC is more often than not an anchor, an inhibition to technological progress. Accordingly, BioBright is supported by revenues from clients and a few angel investors who, in Fracchia’s words, “are involved because they believe we need to change the way biology is done.”

VC’s demands for relatively quick returns, says Fracchia, “can absolutely kill companies before they have time to deploy their products or services. That’s especially true for fields other than hardware, like biology. I don’t want to go to a venture capitalist and say, ‘Give me $20 million to build this,’ knowing it will take me eight years to complete the project, and then the response is ‘What is my return in 4.5 years?’ If I say, ‘I need eight years,’ I won’t get funded. Ultimately, these rigid, profit-oriented timelines destroy innovation, and we can’t afford that. Biology touches on real life and death issues: cures for Zika and Ebola, cures for cancer, food production. We need faster rates of innovation, and we won’t get that by building silos.”

And speaking of silos: Fracchia is concerned that overspecialization and walled-off data will make it difficult to staff smart labs with accomplished researchers.

“We’re not going to save the world by producing ever larger hordes of PhDs with narrow disciplines,” he says. “Look at the current numbers: only 15 percent of biology post docs are able to establish an academic career. A lot of them end up as technicians at pharma companies for $45,000 a year. They have fantastic brains, but because they haven’t been trained properly, and because of insufficient open-source technology, they hit dead ends.”

Biologists, Fracchia continues, understand the problems implicit in biotechnology to a far greater degree than computer scientists, “but they don’t really have the tools to solve them. Computer scientists, on the other hand, have mastered a lot of the tools biologists need, but they don’t understand the essential problems. Somehow, we have to meld computer science and electronics and biology into a single disciple, and we have to make technology open and accessible. Cross-trained researchers with full access to the resources they need will be able to take full advantage of the smart labs that are coming. They’re the ones who will make the dramatic breakthroughs.”