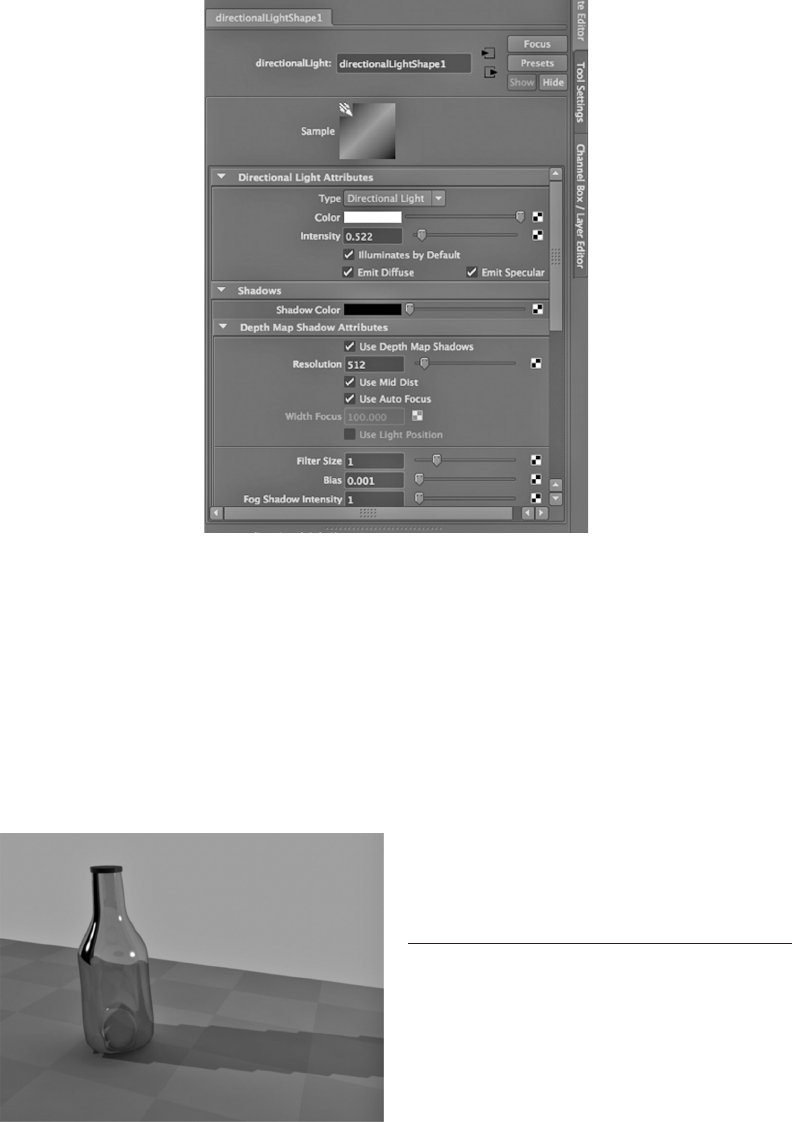 396 ◾ 3D Animation for the Raw Beginner Using Maya
With the light selected, we hit Control+A once or twice until the Attribute Editor of the
light appears. We set the shadow Resolution to 512 and choose Depth Map Shadows. Depth
Map Shadows, as we have seen, are sharper than the alternative, Raytrace Shadows. en
we render with mental ray; our scene, which consists of a glass bottle sitting on a counter-
top, is shown in Figure15.45.
We see that the shadow of the bottle is quite jagged. So, we change the resolution to
4096 in Figure15.46. We render the scene again (see Figure15.47). e shadow is much
smoother now.
ADDING RAYTRACE SHADOWS
AND MENTAL RAY SUN AND
SKY TO THE BOTTLE
The mental ray Sun and Sky can do a lot
more than provide a nice, gradual blue
horizon. It is a significant light source
and we can use it to create powerful
effects.
In Figure 15.48, the attributes of a
Directional light are shown, with Raytrace
Shadows checked. e result is shown in
Figure 15.49, and we see that raytracing
FIGURE 15.44 Resolution 512 with Depth Map Shadows.
FIGURE 15.45 (See p. CI-10 of Color Insert)
Render with jagged shadow.

Advanced Light and Materials Properties and Effects ◾ 399
creates so shadows. Now, we go into the Options settings of the Render View window and
click on Physical Sun and Sky (see Figure15.50).
e result is shown in Figure 15.51. Notice that the added light from the men-
tal ray Sun and Sky material is completely washing out the table on which the bottle
sits, giving the scene a hot feel.
FIGURE 15.50 e mental ray Sun and Sky.
FIGURE 15.51 (See p. CI-10 of Color Insert) A bottle in the Sun.