Get full access to Antenna Theory and Applications and 60K+ other titles, with free 10-day trial of O'Reilly.

A loop antenna consists of a conductive wire, usually bent into a circular form, although other forms are possible. The small loop antenna characteristics are very similar to those of the small dipole antenna. The small loop antenna will be shown to be equivalent to an infinitesimal magnetic dipole. Loop antennas are denoted small or large, depending on the size of the circumference with respect to the wavelength. The derivation of the radiated fields of the loop antenna could be performed in a way similar to the procedure we used for calculating these fields for an infinitesimal z-directed current element: Obtain the vector potential for an infinitesimal, φ-directed current element and then generalize to a larger loop with an assumed current density. However, since we have already derived expressions for the far magnetic and electric fields for arbitrary current distributions, we will derive the far-field for a general loop, having a uniform current distribution, and then specify for small loops.

For the loop analysis we will consider a filamentary, circular wire loop of radius a in the xy-plane of a rectangular coordinate system, see Figure 6.1. 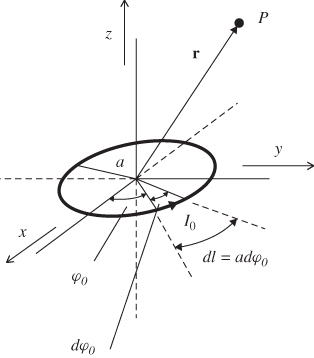 The radius can have any value, but we do assume the current to be uniform and in-phase over the loop ...

Get Antenna Theory and Applications now with the O’Reilly learning platform.