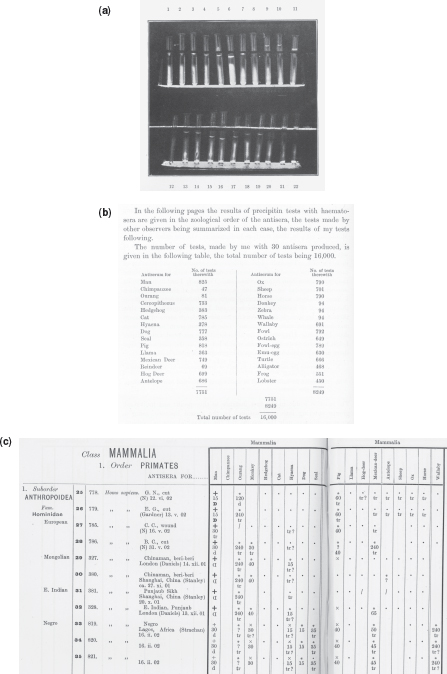 For the first half of the twentieth century, the main phylogenetic analyses based on molecular data were the remarkable precipitin tests pioneered by George Nuttall and colleagues. Antisera were incubated with serum samples from a variety of species, and the time required for a precipitation reaction was recorded, as well as the strength of the reaction. (a) Sample test tubes in which the reactions were conducted (Nuttall, (1904), plate I) (b) Excerpt from Nuttall ((1904), p. 160) describing the 16,000 tests he performed. (c) Portion of the 92-page data summary of Nuttall ((1904), pp. 222–223). The 900 rows (of which 11 are shown here) represent blood samples that were tested, and the columns correspond to antisera obtained from 30 organisms (of which 18 are shown here). The values represent the time (in minutes) required for a reaction. The symbols indicate the degree of reaction (+ being greatest, and – indicating no reaction). The letter D indicates the presence of deposits in the test tube. Nuttall used these data to infer the phylogenetic relationships of assorted mammals, birds, reptiles, amphibians, and crustaceans. In the 1950s and 1960s, amino acid sequence comparisons largely replaced immunological tests for phylogenetic analysis.