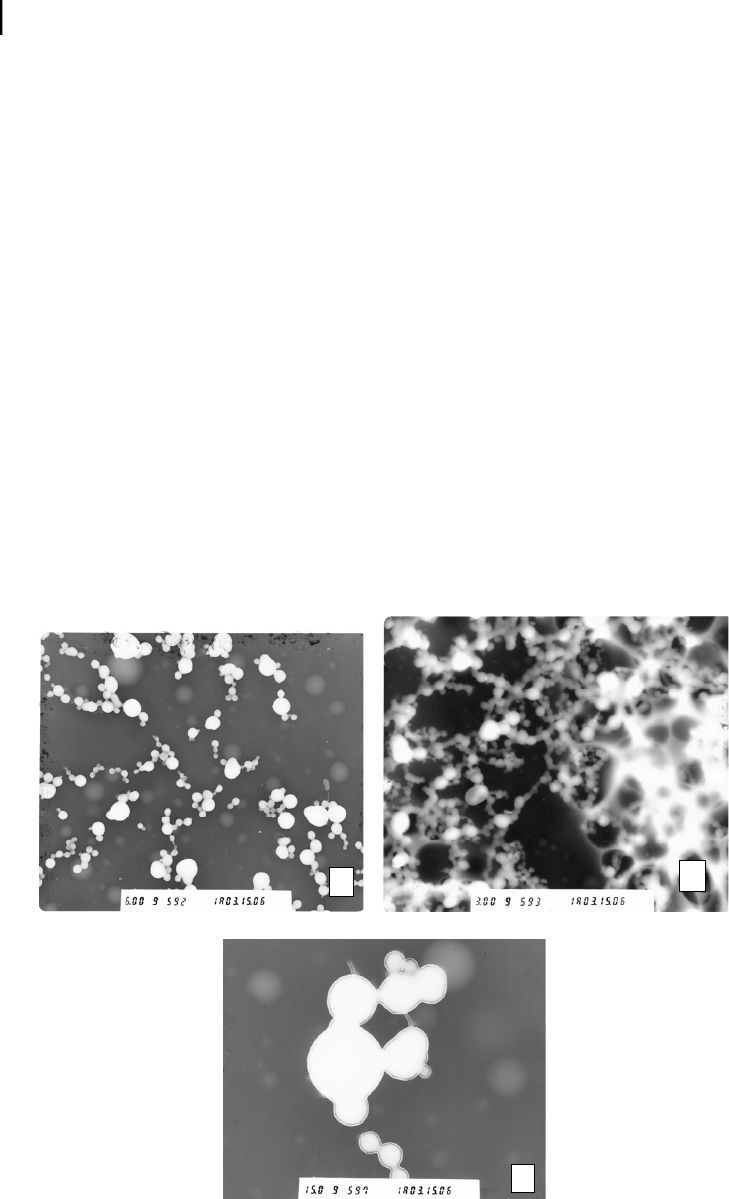 16 J. Bai et al.
2.3.2 TEM
Magnetic spider silk ﬁlm was investigated using TEM, where the size and contour
of the spheres could be much more deﬁned. The spherical particles varied in
diameter, approximately between 150 to 650 nm. A select few were as large
as 1.4 μm. The particles were not dispersed in any orderly fashion. They did
however appear to connect and form chains or clusters (see Figs. 2.4(a) and 2.4(b)).
Note that, particularly in Fig. 2.4(b), the spheres appear to blend in with each
other forming ﬁbrous structures, with the more transparent materials between the
spheres appearing to join them together. It is possible, then, that the spheres not
only exist on the surface, but also within the ﬁber-like material. However, in areas
that are more concentrated with spider silk material (see Fig. 2.4(c)) spheres exist
in fewer numbers and smaller sizes. These smaller particles could be a result of Fe
particles not being able to bind with oxygen as easily, making diffusion within a
higher concentrated spider silk region more difﬁcult.
2.3.3 FTIR
Fourier Transformed Infrared Spectroscopy (FTIR) was used to characterize the
molecular structure of the spin-on spider silk ﬁlm. Previously, FTIR measurements
a
b
c
Figure 2.4. TEM images of spheres (a)× 6k (b)×3k (c)×15k magniﬁcation.
SO13997_text.indd 24SO13997_text.indd 24 26/01/2011 3:49 PM26/01/2011 3:49 PM 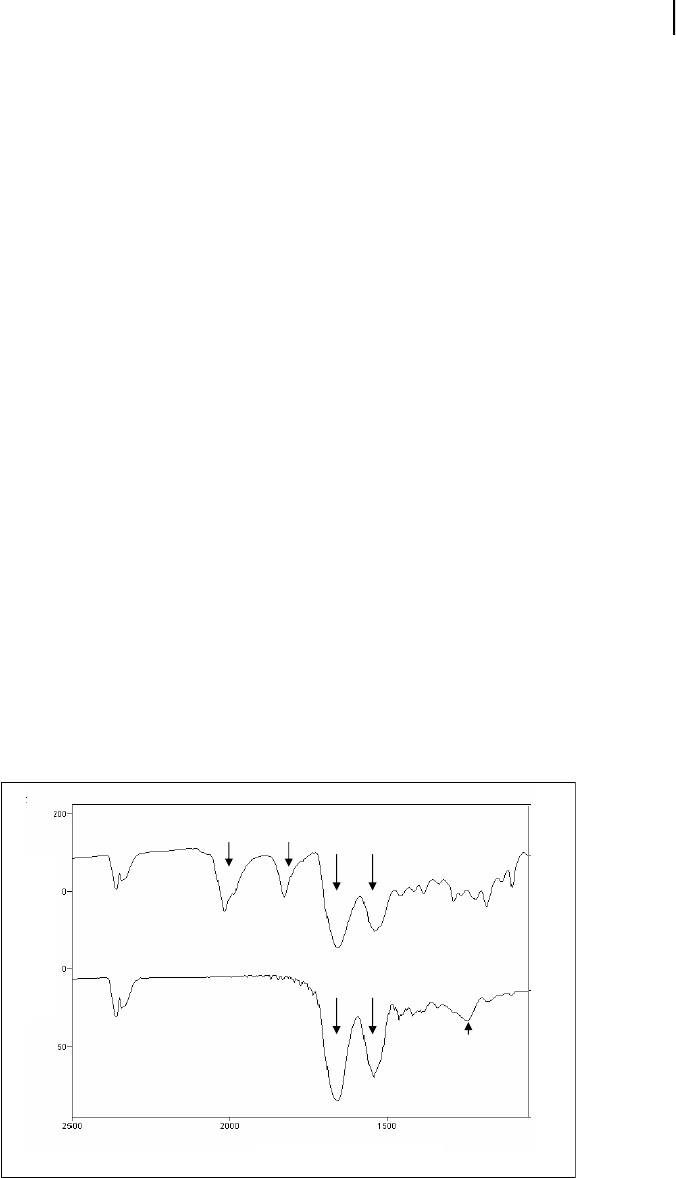 Spider Silk as a MEMS Material 17
of native spider silk ﬁbers have shown peaks corresponding to Amide I, II and
III vibration modes. These peaks correspond to the arrangement of polypeptides
present in the silk’s secondary structure. The material properties of spider silk
have been shown to be strongly linked to its secondary structures.
10,33
FTIR Peaks
at wave numbers 1652 and 1669 cm
−1
in the Amide I region have been assigned to
α-helical and β-sheet backbone conformations respectively.
31
A peak at 1540 cm
−1
in the Amide II band corresponds to disordered conformations,
6
while peaks at
1230 and 1240 cm
−1
in Amide III are associated with β-sheets and disordered
conformations.
45
The FTIR spectra are shown in Fig. 2.5. The top spectrum
represents the iron spider silk sample and the bottom spectrum represents the pure
regenerated spider silk sample.
As shown in Fig. 2.5, the FTIR spectrum of the regenerated spider silk thin ﬁlm
obtained from a spin-on process shows peaks at 1660, 1542 and 1242 cm
−1
.The
pattern of the three peaks, ranging in intensity from moderate to strong, is similar
to that reported to indicate the presence of α-helical and random conformation
components. The β-sheet conformation, which is suggested to be responsible for
the high stiffness and strength of the material
29
was not found to be present in this
work. This indicates a change in the material’s secondary structure in comparison
to the native ﬁber state.
Peaks below 1450 were not resolved and lacked distinctiveness, thus they are
not addressed here. The Amide I and Amide II peaks are shown at wave numbers
1657 and 1537. The vibration mode in the spectral region between 1600–1700 cm
−1
predominantly originated from the C = O stretching of Amide I group.
21
Based
on the position within this spectral region, 1657 cm
−1
represents a 20% presence
of α-helix in the sample’s secondary structure.
46,47
1537 falls within the Amide II
1660
1542
1242
2014
1823
1657
1537
Wavenumber (cm
-1
)
Transmittance %
Figure 2.5. FTIR of iron spider silk sample. Top spectrum is iron spider silk; bottom
spectrum is the pure regenerated spider silk.
SO13997_text.indd 25SO13997_text.indd 25 26/01/2011 3:49 PM26/01/2011 3:49 PM