20 J. Bai et al.
slows down. This is shown by overlapping of the ﬁve minute spectrum with the
40 minute spectrum.
Finally, a small shift in wave number at the 1823 peak is shown between the
one minute and ﬁve minute spectra. Since the wave number shifts when the
sample is in different states (such as liquid, solid or gas), it is likely that the shift
here is a result of the sample not being completely dried when the spectrum was
taken after one minute of UV exposure.
For the magnetic spider silk material, the formation of the observed spheres
is a direct result of mixing iron pentacarbonyl with the regenerated spider silk
solution. The spheres contain a concentration of Fe that is slightly higher than the
rest of the material. Fibrous and porous material containing a low concentration
of iron also formed as a result of this mixed solution. In order to further explore
the reason behind this phenomenon, an FTIR was performed to study any binding
that could have occurred between the iron particles and the spider silk proteins.
2.3.4 Squid
A SQUID was used to characterize the magnetic hysteresis of the material.
Figure 2.8 illustrates the M vs. H hysteresis plot for a solid iron spider silk
sample at 300 K. The saturation magnetization is found at 1.4 × 10
−5
emu/g,
which is 105 times smaller than the previously reported level for polymer coated
iron particles.
2
This is not surprising, as the iron wt% in the reported particles is
around 21%; whereas the amount of Fe in this sample is only around 1.5–3 %. The
remanence ratio of 16.6% and coercivity of 30 Oe was also found. These two values
are in the same range as the ones reported for polymer coated iron particles.
2.3.5 Micromachining and Mechanical Testing of a Spider Silk
Microbridge
The mechanical testing results of the ﬁlm performed by a nano indentation
machine [mts] are summarized in Table 2.2. The elastic modulus and hardness
decrease as the % w/w ratio of silk to solvent decreases. This is likely due to
the difference in ﬁbroin concentration. However, an advantage of the 0.5% w/w
solution is its ﬁlm consistency, reduction in surface roughness, and its increased
sensitivity to the effects of spin-coating speed. As shown in Fig. 2.1(a), the ﬁlm
porosity appears to be less prominent in the upper region compared to the lower
region of the cross section. Mechanical testing data were mostly collected in
the upper region of the ﬁlm thickness (the ﬁrst 500 nm), and this could be a
contributing factor to the high Young’s modulus value, which is not common in
porous materials.
Data on the viscoelastic properties (loss tangent) of the ﬁlm were obtained
for the ﬁrst time in this experiment. The loss tangent showed no dependency on
% w/w dilution in the range used and was found to be similar to the loss tangent
of human bone specimens (0.05).
38
The data collected using the nano indentation
SO13997_text.indd 28SO13997_text.indd 28 26/01/2011 3:50 PM26/01/2011 3:50 PM 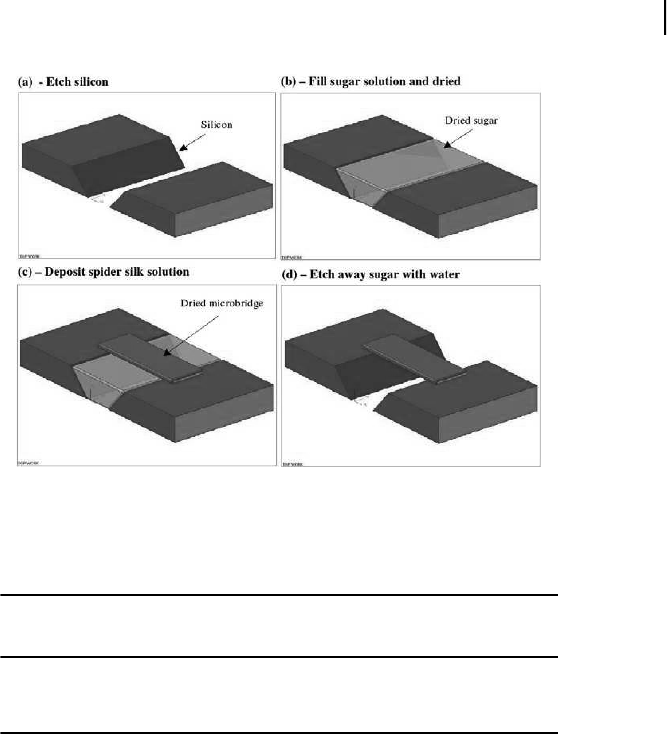 Spider Silk as a MEMS Material 21
Figure 2.8. Sacriﬁcial etching process steps to fabricate spider silk microbridge. For color
reference, see page 253.
Table 2. 2 Mechanical testing of thin ﬁlm spider silk
Sample Elastic Modulus Hardness Viscoelasticity
(GPa) [std] (GPa) [std] (loss tangent) [std]
1% w/w 7.251[0.494] 0.276 [0.005] 0.0436 [0.0065]
0.5% w/w 4.41 [0.342] 0.182 [0.012] 0.182 [0.012]
machine takes into consideration the substrate effect on thin ﬁlm tests. This has
been previously documented in many studies.
4,26
Using a widely accepted rule of
thumb, the intrinsic property of the ﬁlm can be reasonably detected with minimal
effect from the substrate when the indentation depth is kept to 10% of the ﬁlm
thickness.
37
Only consistent mechanical property data within this region is used in
this work. In addition, the thicknesses of the ﬁlms used are in the range of 5–10 μm,
which should improve the accuracy of the nano indentation data.
In order to demonstrate a micromachined spider silk microstructure, a mod-
iﬁed surface micromachining process with a sacriﬁcial etching technique
36
was
carried out to fabricate a free-standing spider silk microbridge. Figure 2.8(a),
shows a silicon substrate that is anisotropically etched to form a cavity. Sugar
solution (50 wt%) was poured into the cavity and air dried to form a sacriﬁcial
layer (Fig. 2.8(b)). The spider silk solution was then deposited using a 2 ml needle
syringe and air dried (Fig. 2.8(c)). Finally, the silicon substrate was immersed in
water to “etch” away the sugar (Fig. 8(d)), leaving the free-standing spider silk
microbridge shown in Fig. 2.8(d). Figure 2.9(a) shows a SEM microphoto of the
spider silk microbridge (800 × 800 × 40 μm
3
).
SO13997_text.indd 29SO13997_text.indd 29 26/01/2011 3:50 PM26/01/2011 3:50 PM