MEMS in the Nervous System 67
neurotransmitters and chemicals present at synapses after external stimulation
could answer questions about what signaling cascades are initiated in response to
certain stimuli and how the chemicals present affect nervous system transduction.
The small volumes used by these chemical interfaces are advantageous because
they do not displace a large volume of ﬂuid in nervous system tissue and so such
procedures should be minimally damaging.
To answer complex questions about the nervous system, it is often advan-
tageous to have a simple model system that is easily controlled. Multielectrode
arrays and microﬂuidic devices allow the investigator to control the environment
of cells or tissues in vitro. The development of cells in culture can be modiﬁed by
a multitude of stimuli, including but not limited to, chemical gradients of growth
factors or adhesion proteins, supplements present or absent in culture medium,
ﬂuid ﬂow rates, and electrical stimulation. In vitro cultures allow a great deal
of control over the environment of cells or tissues, which can be helpful when
determining which variables are critically important in a study.
MEMs devices are capable of being batch fabricated, which means many can
be made at one time and this reduces the cost per device. This is especially
applicable to silicon devices, where more than one device can be patterned and
processed on a single wafer. Batch fabrication can also reduce the variability
between devices, as many are made using the same solutions at the same time
in the same environment. Because devices made at the same time are similar,
this may help reduce the variability of the in vivo biological response to implants.
In the case of polydimethylsiloxane (PDMS) or glass devices, fabrication is often
inexpensive because the materials used are inexpensive. In addition, such devices
may not require a cleanroom and can, in theory, be made in the laboratory.
4.1 IN VITRO DEVICES
In vitro devices allow an investigator to study neuronal tissues outside the body,
where the environment and external factors can be easily controlled. The in vitro
devices discussed here are microelectrode arrays, microperfusion devices, and
microﬂuidic devices.
4.1.1 Microelectrode Arrays
Microelectrode Arrays (MEAs), also called multielectrode arrays, are valuable
tools for studying network activity between neurons. An array is typically made
by patterning a conductive material such as gold onto an insulating substrate like
glass. Substances like platinum black can be used to reduce electrode impedance.
1
The recording site for each electrode is exposed to cells plated on the MEA surface,
and leads transmitting this information to an external connection are insulated
from the neurons above it (see Fig. 4.1).In some experiments, dissociated cultures
of cells are plated onto the MEA surface and allowed to attach.
2
Other groups
have had success using electrically active whole tissues, such as retina.
3,4
Signals
SO13997_text.indd 75SO13997_text.indd 75 26/01/2011 3:50 PM26/01/2011 3:50 PM 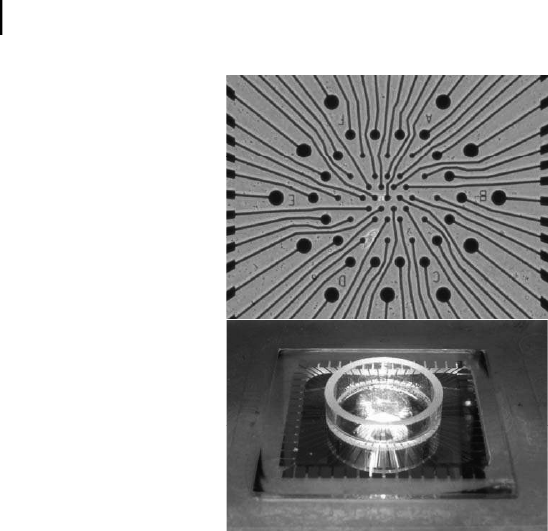 68 S. Norman and R. Bellamkonda
Figure 4.1. One example of a commercially available microelectrode array (Multichannel
Systems Hexagonal Array). Neurons or neural tissues are plated on the array surface, top.
The circular electrodes can be stimulated and recorded from, but the electrical traces are
insulated from neurons plated above. The electrodes are found in the center of the well,
which contains culture media to provide cells with nutrients, bottom. For color reference,
see page 258.
can be recorded from the somas or neurite extensions of these neurons. In
addition to recording from neurons, electrodes in MEAs can be used for other
purposes, such as examining neurotransmitter release from activated cells using
cyclic voltammetry.
5
While dissociated cortical cultures do contain the cells found in brain tissue,
this model system does not completely recapitulate the structural arrangement of
the brain itself. Slice cultures are a model choice for experiments that require the
structural components of the brain to be intact. Like dissociated cultures, brain
slice cultures do not represent exactly what happens in a whole organism, because
systemic effects are not present, but they are still an effective in vitro model for
studies requiring preserved neural spatial arrangement. Slice cultures contain the
appropriate combination of cell types in the appropriate organization of the brain,
and are more physiologically relevant structurally than dissociated cortex.
Like dissociated cell cultures, slice cultures can be placed directly on tradi-
tional planar MEAs;
6
however, three dimensional MEAs are also used. Three
dimensional MEAs contain raised pillars for electrodes, which form a three-
dimensional surface, in contrast to the planar arrays discussed above. They are fab-
ricated from a variety of materials and have a variety of geometries. For example,
one group etched relatively short 60 micrometer pillars from glass substrates; the
top portion of each pillar is used as an electrode.
7
A different silicon MEA model
SO13997_text.indd 76SO13997_text.indd 76 26/01/2011 3:50 PM26/01/2011 3:50 PM