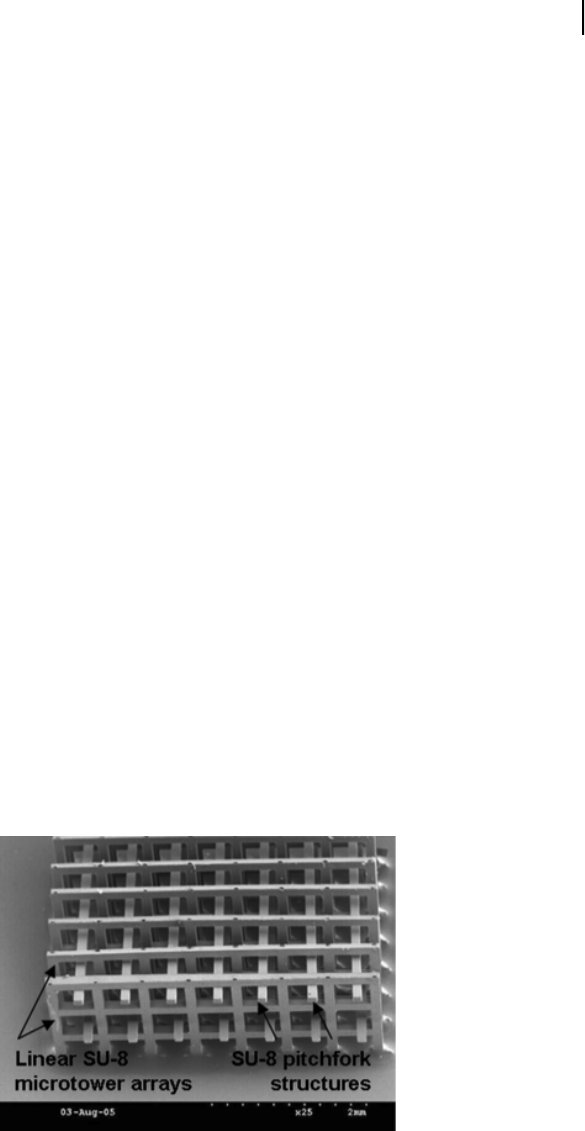 MEMS in the Nervous System 69
is anisotropically etched in potassium hydroxide after each tip area is masked by
patterned silicon dioxide, which forms the pillars; a conductive platinum layer is
then deposited on top of silicon nitride and silicon dioxide insulation layers and
covered with another silicon nitride layer, after which the tips are shaped with
a plasma treatment and etched out of the silicon nitride using deep reactive ion
etching (DRIE).
8
The advantage of three-dimensional electrodes for brain or spinal
cord slices is the ability to record or stimulate multiple neurons located in interior
regions of the tissue, but researchers have found that recordings from dissociated
cultures on three-dimensional MEAs tend to have approximately the same signal
quality as dissociated cultures on planar electrodes.
9
One problem with dissociated cells grown in two-dimensional culture is that
planar arrangements do not represent the structural complexity found within nor-
mal brain because cells are not grown in three dimensions. Spatial cues can dictate
how cells grow and develop, and these cues are lacking in planar MEAs. Three
dimensional MEMs scaffolds offer the unique advantage of built-in perfusion
ability and can be augmented with electrodes for recording and stimulation. These
scaffolds are fabricated from silicon using normal microfabrication processing and
then arranged in the three dimensional structure after fabrication of the individual
two-dimensional parts is complete (see Fig. 4.2).
10
4.1.2 Microperfusion Devices
Traditional slice cultures have complications, two of which are that they cannot
be cut more than several hundred microns thick and they thin out over time,
11
thick slices can become necrotic in the center, probably because nutrients from
media and oxygen from the surrounding air do not diffuse entirely through the
slice.
12
Also, if a slice is laying ﬂat on a planar MEA or other surface, nutrients
must diffuse all the way through the slice to maintain it, which may not happen
Figure 4.2. Three dimensional scaffold for growing neuronal cultures. Rowe et al., 2007,
Lab on a Chip, Vol 4, pp 475-482.
10
Reproduced by permission of The Royal Society of
Chemistry. http://dx.doi.org/10.1039/b700795g.
SO13997_text.indd 77SO13997_text.indd 77 26/01/2011 3:50 PM26/01/2011 3:50 PM