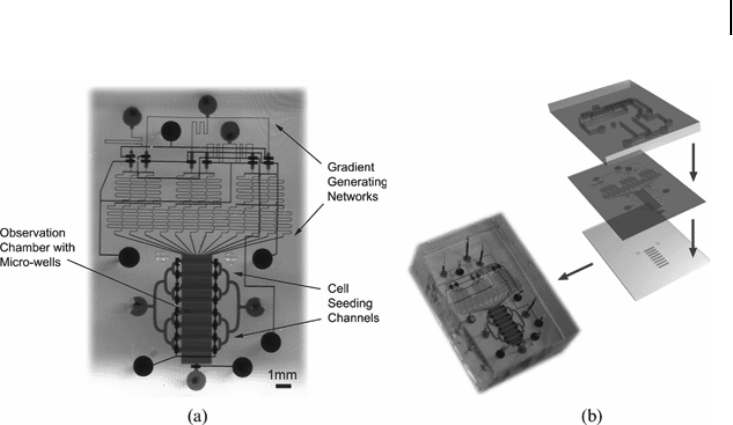 Hydrogel-Based Microﬂuidic Cell Culture 101


Figure 5.9. A composite-gradient generator composed of two parts: a custom microfab-
ricated PDMS chip and a glass coverslip. (a) The PDMS chip has two layers: the bottom
ﬂuidic layer (red) contains a gradient generating network, a symmetric cell seeding network
and a chemotaxis observation chamber; the top layer (blue) contains pneumatic control
valves which can turn on or off the ﬂow in the speciﬁed ﬂuidic channels on the bottom
layer. The glass coverslip is wet-etched with an array of micro-wells (darker red). (b) The
three-dimensional relationship between all the layers is schematically demonstrated on the
right panel. The actual device is ﬁlled with food dyes to facilitate visualization.
56
For color
reference, see page 262.
the ﬂow can be used to precisely deﬁne a variable chemical microenvironment,
which is not achievable using current static culture techniques.
5.4.1 On-chip Alginate Cell Encapsulation
Alginate-based cell entrapment and release in microﬂuidic chips has been demon-
strated with yeast cells.
63,64
The hydrogel is formed when laminar ﬂows of alginic
acid solution and calcium ion solution are brought into contact. The calcium
stream diffuses into the second stream and alginate hydrogel forms at the bound-
ary (Fig. 5.11). The alginate hydrogel can be dissolved in EDTA (ethylene
diaminetetraacetic acid), which is a calcium complexing agent.
Microﬂuidic patterning of alginate hydrogels has been demonstrated with
stacked gel layers having widths as low as 10 μm.
65
The gel layer width is varied
through control of the alginate solution ﬂowrate. Each gel layer can be used to
entrap a different cell type. Such ﬁne control of cell positioning may be used to
create models of the natural structure of tissues. Cells can be released from the gel
by applying a ﬂow of EDTA into the channel, which dissolves the alginate within
seconds. Since cell release from the hydrogel can be effected in a short time period,
the exposure to EDTA is minimized, giving high viability after release. This system
has been used for co-culture by seeding different cell types into separate adjacent
gel layers.
66
A laminar alginate-based system has been used to encapsulate breast
SO13997_text.indd 109SO13997_text.indd 109 26/01/2011 3:50 PM26/01/2011 3:50 PM