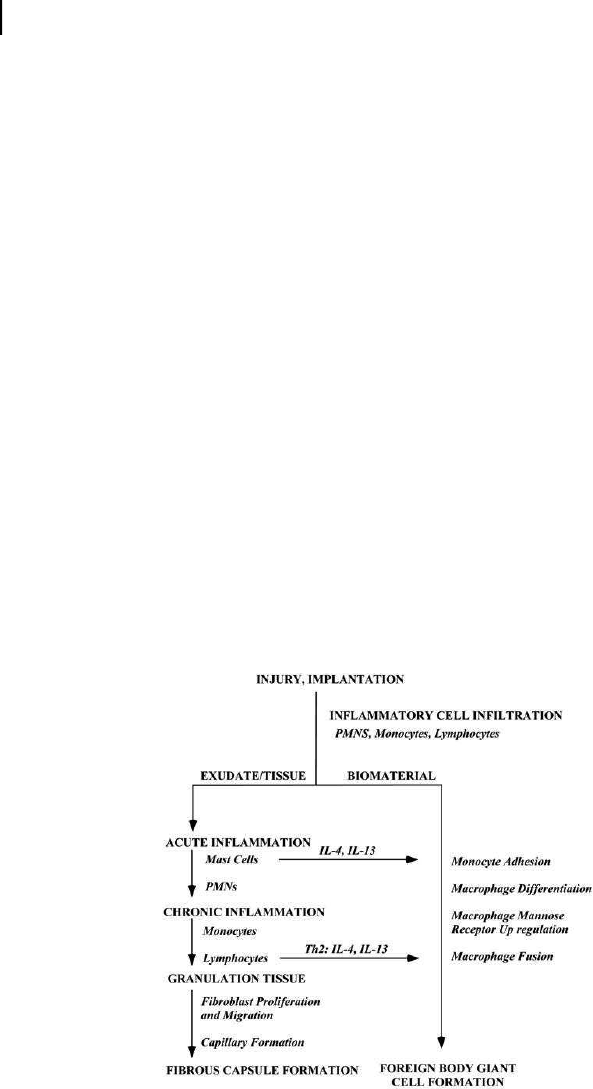 152 G. Voskerician
7.3.2 Tissue Biocompatibility and Effect on Biofunctionality
Inﬂammation, wound healing, foreign body response, and ﬁbrosis are recognized
as principal phases of the tissue or cellular host response to injury, here, as a result
of BioMEMS implantation (Fig. 7.1).
31,32
Inﬂammation represents the reaction of
the vascularized living tissue to the local injury created at the time of implantation.
The subsequent onset of wound healing leads to the formation of the granulation
tissue, characterized by angiogenesis and presence of ﬁbroblasts (Fig. 7.2).
13
Fi-
nally, the foreign body reaction, represented by macrophages and foreign body
giant cells (FBGC), follows leading to ﬁbrosis and ﬁbrous encapsulation. The
ﬁbrous tissue encapsulates the BioMEMS, isolating the implant from the local
tissue environment.
12,13
The size, shape, length of time of intended use, chemical
and physical properties of the BioMEMS drug delivery systems may be responsible
for variations in the intensity and duration of the inﬂammatory and/or wound-
healing process.
33−36
The inﬂammation and wound healing response can be divided into several
fundamental stages: acute inﬂammation, chronic inﬂammation, formation of gran-
ulation tissue, foreign body reaction, and ﬁbrous capsule development (Fig. 7.1).
13
The acute phase of the inﬂammatory response occurs immediately after tissue
injury, and is of relatively short duration, lasting from minutes to days, depending
on the extent of the injury. It is characterized by plasma protein adsorption and the
migration of leukocytes from the microcirculation, including poly-morphonuclear
Figure 7.1. The host response to injury. The injury and the presence of the implanted
device jointly induce an inﬂammatory and wound healing response, characterized by the
following phases: acute inﬂammation, chronic inﬂammation, granulation tissue and ﬁbrous
capsule formation. During this process, macrophages and foreign body giant cells undergo
“frustrated phagocytosis” in an attempt to breakdown the device.
SO13997_text.indd 160SO13997_text.indd 160 26/01/2011 3:50 PM26/01/2011 3:50 PM 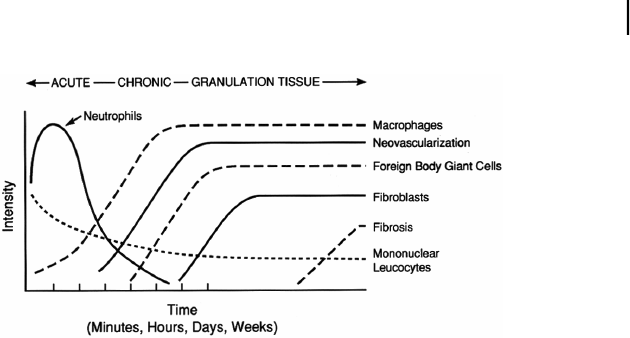 Application of MEMS in Drug Delivery 153
Figure 7.2. The temporal modulation of the cellularity present in the various stages of the
inﬂammatory and wound healing response. The intensity and time variables are dependent
upon the extent of the injury created by implantation and the size, shape, topography, and
chemical/physical properties of the device.
leukocytes (PMN), monocytes, and lymphocytes (Fig. 7.2). These inﬂammatory
cells actively migrate from the vasculature in response to chemotactic factors
present at the implant site. Protein-rich ﬂuid (exudate) accompanies this cellular
movement. Further, increased vascular permeability facilitates this movement
resulting in accumulation of cells and exudate, and it is the result of several mech-
anisms including endothelial contraction, cytoskeletal reorganization, leukocyte-
mediated endothelial cell injury and leakage from regenerated capillaries.
13
Along
with the device itself, the extent of tissue injury proportionally contributes to the
overall extent of the inﬂammatory response. Placement is also critical, as more
destruction/injury of tissue in general leads to a more active acute inﬂammatory
phase.
The predominant cell type within the exudate during the acute phase is the
poly-morphonuclear leukocyte (PMN), also called a neutrophil. Its major role is
to attack and digest (phagocytose) bacteria, tissue debris and the foreign material,
so that wound healing can proceed.
37−39
. Although BioMEMS are not generally
phagocytosed by PMNs or macrophages due to the disparity in size, certain events
in phagocytosis are known to occur. While the implant size may prevent its total
ingestion by macrophages, they will attach to the device and undergo what is
termed “frustrated phagocytosis”.
13
This process does not involve engulfment
of the BioMEMS, but does cause the extracellular release of leukocyte products
(lysosomal enzymes, proteases and free radicals) in an attempt to degrade the
surface contact material (Fig. 7.3).
13
In general, the number of PMNs throughout
the implantation time is indicative of negative compatibility or even toxic effect
induced by the device leading to unsatisfactory overall biocompatibility.
13,39
A
stable large PMN population over extended periods of time suggests a continued
cellular migration from the vascular system since the lifetime of the PMN is
relatively short (48 hours) leading to an unresolved inﬂammatory phase, a sign
of poor biocompatibility of the BioMEMS.
SO13997_text.indd 161SO13997_text.indd 161 26/01/2011 3:50 PM26/01/2011 3:50 PM