Polymer-Based Biocompatible Surface Coatings 175
8.2.1.2 Electrostatic Adsorption
In this method, electrostatic adsorption of charged polymers on oppositely
charged surface was used for creating a non-fouling surface layers on metallic
surfaces.
46−48
Hubbell and Spencer developed a class of copolymers based on
poly(L-lysine)-g-poly(ethylene glycol) (PLL-g-PEG), which was found to sponta-
neously adsorb from aqueous solution onto several metal oxide surfaces, pro-
viding a high degree of resistance to protein adsorption.
46−47
The adsorbed co-
polymer layer formed a comb-like structure on the surface, with positively charged
primary amine groups of the PLL bound to the negatively charged metal oxide
surface due to electrostatic interaction, while the hydrophilic and uncharged PEG
side chains were exposed to the solution phase. The resulting adsorbed layers were
highly effective in reducing the protein adsorption from both individual protein
solutions and blood serum. The amount of protein adsorbed from human serum
on the modiﬁed surfaces was consistently below 1–2 ng cm
−2
. Fibrinogen adsorp-
tion was reduced by 96-98% in comparison to the unmodiﬁed oxide surfaces.
8.2.2 Chemisorption of PEG Containing Thiol or Sulﬁde Groups
The spontaneous assembly of thiol or sulﬁde containing molecules on noble metal
surfaces is a good method for surface modiﬁcation.
49
This method has been
extensivelyusedinthemodiﬁcationofgoldorgoldcoatedsurfaces.Onegreatad-
vantage of this method was the ease of preparation of surfaces; alkanethiols readily
assemble when gold surface was exposed to alkanethiols either in solution or
vapor phase.
49−50
Self assembled monolayers (SAMs) of alkanethiols, terminated
with short oligomers of the ethylene glycol groups, (HS(CH
2
)
11
-(OCH
2
CH
2
)
n
OH),
were developed to resist the adsorption of several model proteins.
51−59
Prime and Whitesides prepared monolayers from alkanethiols terminated
with short oligomers of the ethylene glycol group (HS(CH
2
)
11
(OCH
2
-CH
2
)
n
OH;
n= 3-7) and studied their protein exclusion behavior
51
They found that these
monolayers appeared to provide a general solution for controlling non-speciﬁc
adsorption of proteins with a range of molecular weights and isoelectric points
(pI), and under a wide range of solution conditions
52−53
For a better understanding of the factors involved in the protein resistance
of oligoether SAMs, Herrwerth and Grunze synthesized a series of oligoether-
terminated alkanethiols with different oligoether backbones, different chain
lengths and different alkyl terminals.
54−56
Their studies suggested that the pene-
tration of water molecules to the interior of the SAMs was a necessary prerequisite
for protein resistance. Three factors, including the hydrophilicity of the internal
units, packing density and the hydrophilicity of the terminal group should be
considered for making a non-fouling oligoether SAMs. It was demonstrated
that an interior hydrophilic structure was necessary as evident from the fact that
only the oligo(ethylene glycol) and oligo(trimethylene glycol) SAMs exhibited
protein resistance. Oligo(propylene glycol) SAMs did not show protein repelling
properties (Table 1). Another important factor was the packing density of SAMs.
SO13997_text.indd 183SO13997_text.indd 183 26/01/2011 3:50 PM26/01/2011 3:50 PM 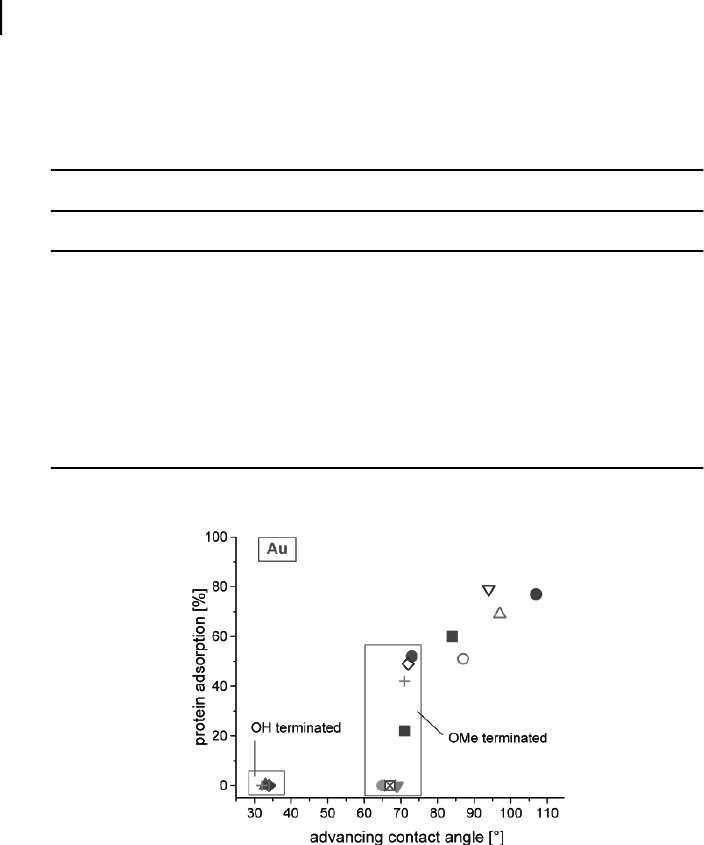