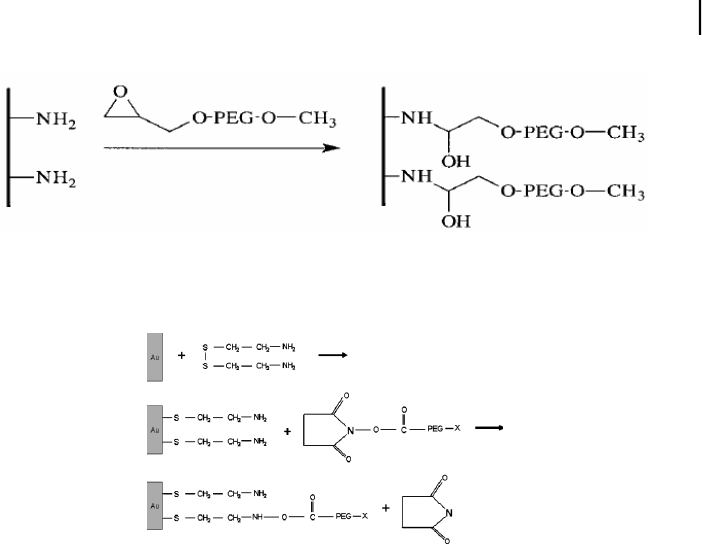 Polymer-Based Biocompatible Surface Coatings 183
Figure 8.9. Reaction of aminopropylsilane (APS) modiﬁed surface with monomethoxy-
epoxide-PEG. Images adapted from Ref. 80.
Figure 8.10. Formation of the PEG-Terminated Gold Surface. Images adapted from Ref. 81.
Malmsten et al. prepared PEG tethered surface through the reaction of amino-
propylsilane (APS) modiﬁed surface with epoxide-PEG (Fig. 8.9). The grafting
density was controlled by the reaction temperature. It was observed that with
increasing PEG chain density the protein adsorption was decreased. At high
interfacial chain density (∼0.1 chain/nm
2
) efﬁcient protein rejection was observed
for a number of proteins.
PEG-modiﬁed surfaces were also prepared by the coupling of PEG-NHS ester
to the amine groups on the surface. Hillier et al prepared PEG tethered surfaces
via this coupling chemistry (Fig. 8.10).
81
Cell adhesion studies illustrated the
effectiveness of PEG-tethered surfaces in minimizing the cell adhesion compared
to the control surfaces.
8.2.4 Surface Initiated Polymerization of PEG-containing
Monomers
Surface-initiated polymerization (SIP) offers another complementary route for
the in-situ synthesis of high surface density of PEGylated polymer surfaces that
had shown exceptional protein resistance and long-term stability in a biological
milieu.
82−90
In this case a polyethylene glycol containing monomer was polymerized from
the surface attached initiators. Since the growth of polymer was by the addition of
small monomers to the growing polymer chain end from the surface, the graft
density achieved was not limited
91
unlike the cases described in the previous
SO13997_text.indd 191SO13997_text.indd 191 26/01/2011 3:50 PM26/01/2011 3:50 PM 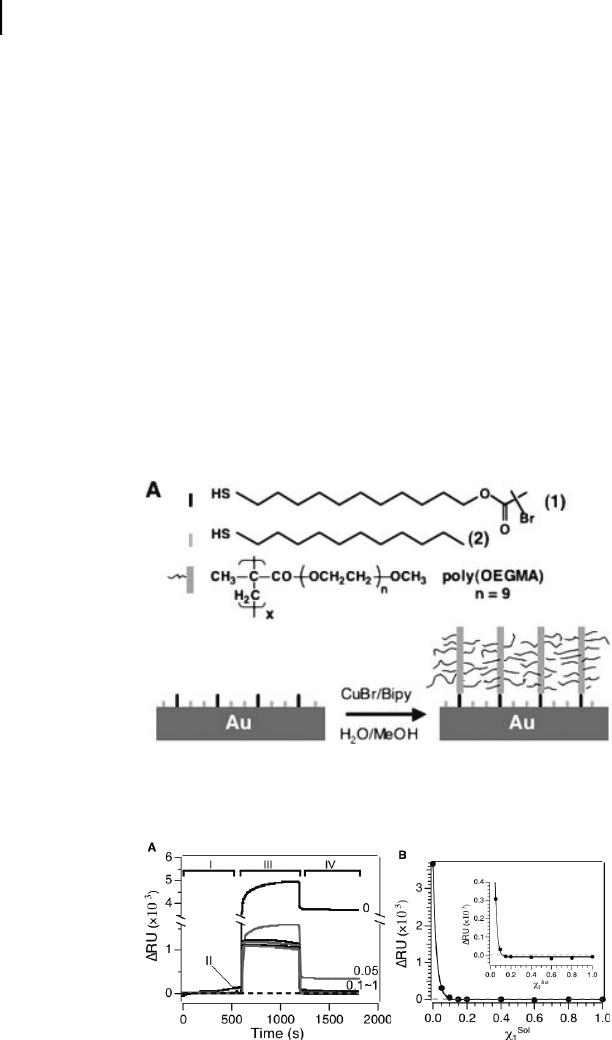 184 K.Yu,G.GaoandJ.N.Kizhakkedathu
section. In the case of surface modiﬁcation using preformed polymers, there exist
an inversion relationship between the graft density achieved and molecular weight
of the chains due to the sterric crowding of the grafted chains.
92
Chilkoti et al. reported the polymerization of oligo(ethylene glycol) methyl
methacrylate (OEGMA) from an initiator functionalized alkanethiol SAM on gold
using atom-transfer radical polymerization (ATRP) (Fig. 8.11).
82
It was found that
the poly(OEGMA) brushes grafted on the gold surface reduced the adsorption of
proteins from 100% serum to below the 1 ng cm
-
2
. They also examined the thresh-
old value for the surface density of initiator required to create protein-resistant
coatings.
83
Fibronectin (Fn) adsorption on the surface-initiated poly(OEGMA)
coatings was below the detection limit of SPR (Fig. 8.12). The results suggested
that SIP of OEGMA is a promising method to prepare protein-resistant coatings
on different materials.
Figure 8.11. Schematic showing the SI-ATRP of OEGMA from a mixed SAM of an initiator-
functionalized thiol 1 and a diluent thiol 2 on gold. Images adapted from Ref. 83
Figure 8.12. SPR chips were coated with poly(OEGMA) brushes grown from a series of
mixed SAMs of 1 and UDT for a polymerization time of 40 min. A) SPR curves: after
priming with PBS buffer for 10 min (region I), 0.5 mg mL
-
1
ﬁbronectin was injected over the
surface (at 10 min: region II) for 10 min (region III), followed by a 10 min rinse with PBS
(region IV). B) The change in RU (DRU) is plotted against χ
surf
1
. The inset is a magniﬁed
view of the response, and the curve is simply a guide to the eye. Images adapted from
Ref. 83.
SO13997_text.indd 192SO13997_text.indd 192 26/01/2011 3:50 PM26/01/2011 3:50 PM